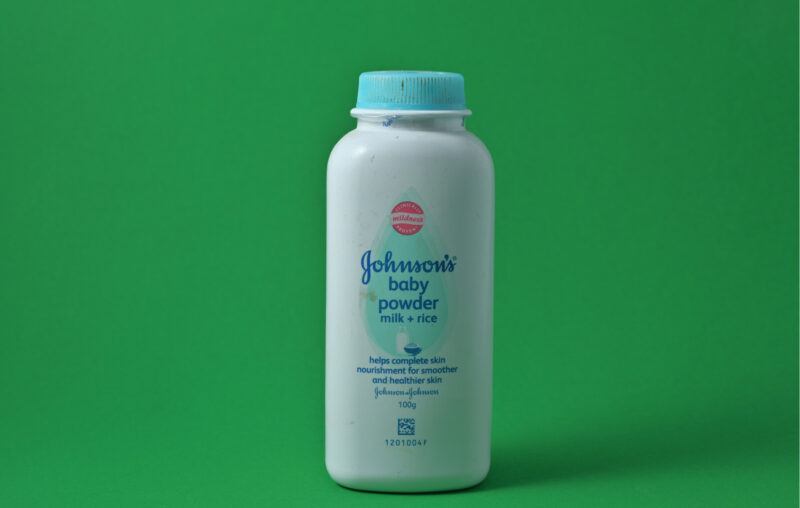 “Despicable as it is brazen,” and “an unconscionable abuse of the legal system,” declared the chief executive of a trial lawyers’ group. She was speaking of Johnson & Johnson’s announcement that it has offloaded potential liabilities into a newly created subsidiary for tens of thousands of legal claims alleging its baby powder and other talc-based products cause cancer.

Except that what’s truly despicable and brazen are the cancer allegations themselves. They are based on little more than the post hoc that out of the perhaps hundreds of millions of Americans who have used – or simply may have used – the product, some later developed cancer and that asbestos (a natural substance) has been found in talc and is a known carcinogen of the lungs.

J&J has a market value of over $400 billion, but has spent billions on baby powder awards and settlements. That included a 2018 judgment with 22 women for $4.69 billion, though last year it was reduced to “only” $2.12 billion (Where it remains after the Supreme Court declined without comment to hear a further J&J appeal.) Just prior, the company announced it would stop selling talc-based baby powder, leaving only a corn-starch product.

In February J&J set aside $3.9 billion for baby powder “litigation expenses,” but the new company called LTL Management LLC is funded with only $2 billion along with “being allocated certain royalty revenue streams with a present value of over $350 million to further contribute to potential costs.”

Unfair? Consider that this is the plaintiffs’ argument in all the cases. 1) They have ovarian cancer; 2) they claim to have had exposure to talc-based J&J Baby Powder near their ovaries; 3) sometimes the primary ingredient talc contains trace amounts of asbestos; and 4) asbestos is a known human carcinogen. Le voila!

According to the American Cancer Society (ACS), “No increased risk of [even] lung cancer has been reported with the use of cosmetic talcum powder.” The ACS does say some studies of talc miners and millers “have suggested an increased risk of lung cancer and other respiratory diseases,” while others haven’t. But even those studies “have been complicated by the fact that talc in its natural form can contain varying amounts of asbestos and other minerals, unlike the purified talc in consumer products.”

The HHS National Toxicology Program doesn’t list talc as a cause of human cancer. The Cancer Council of Western Australia goes so far as to call any link between talc and cancer, and specifically talc and ovarian cancer, “a myth.”

The International Agency for Research on Cancer (IARC) does classify the perineal (genital) use of talc-based body powder as “possibly carcinogenic to humans,” which plaintiffs’ lawyers routinely note in their complaints. But to understand IARC’s methodology, as I described in this previous article, that means nothing more than, “Maybe it’s harmful and maybe it isn’t; we don’t have enough evidence.” That’s why IARC also says asbestos just might be implicated in cancers other than the lung. The IARC conclusion is also referenced on the ACS page, despite ACS’s independent conclusion. That may be a political decision, insofar as originally there was no reference to IARC.

A possible black mark against J&J is that investigations at both Reuters and The New York Times have revealed that, despite contrary claims, they have long known their product contained trace amounts of asbestos. While I haven’t seen the memos firsthand, writing as an attorney I must say the J&J denial looks suspicious. That “thousands of tests by J&J, regulators, leading independent labs, and academic institutions have repeatedly shown that our talc does not contain asbestos” doesn’t mean “no test has.” Although, like a Covid-19 PCR assay, with enough testing there will always be false positives as well as ambiguous results. You never actually see an asbestos fiber, any more than a PCR test shows a virion. That would probably have been a better explanation, although outright denial is understandable given the media’s prejudices that big companies are always wrong and therefore those suing them are always right.

So how did this all come about? Usually one incident puts blood in the water and trial lawyers swarm in. With the Monsanto herbicide glyphosate feeding frenzy the original lawsuit was that of a groundskeeper exposed to the chemical over many years who won a $289 million verdict in 2018. Over a quarter of billion draws a lot of sharks. Never mind that it was later reduced to $25 million.

The Toyota lawsuits (and accompanying mass hysteria of demonic sudden acceleration) on which I led the pushback began when a state trooper was driving a loaner Lexus with passengers. It had the wrong floor mats that couldn’t be tacked down and slid under the accelerator, jamming it open. Notwithstanding his training he panicked and didn’t have the presence of mind to observe the mat and yank it back, or put the car in neutral, or push the engine button to turn it off, or to even hit the brakes. Brakes always override acceleration and witnesses said the vehicle just kept going faster. Now add to all this that a passenger was on the phone to 911 during the incident and thus the sound was recorded and the recording released and that it all ended with a horrific fiery explosion.

My research shows apparently no single incident setting off the Johnson & Johnson litigation; it was just some early successful suits using the above formula.

Oh, and one last thing. Actually, I fudged a bit. J&J actually only halted the sale of talc-based powder in the U.S. and Canada. You see, apparently nowhere else does it cause cancer.

This article, J&J Isn’t the Bad Guy in the Talcum Tort Transfer, was originally published by the American Institute for Economic Research and appears here with permission. Please support their efforts.

Market Snapshot: Dow climbs more than 300 points, stocks gains pick up steam heading toward the bell after a bruising first half of 2022