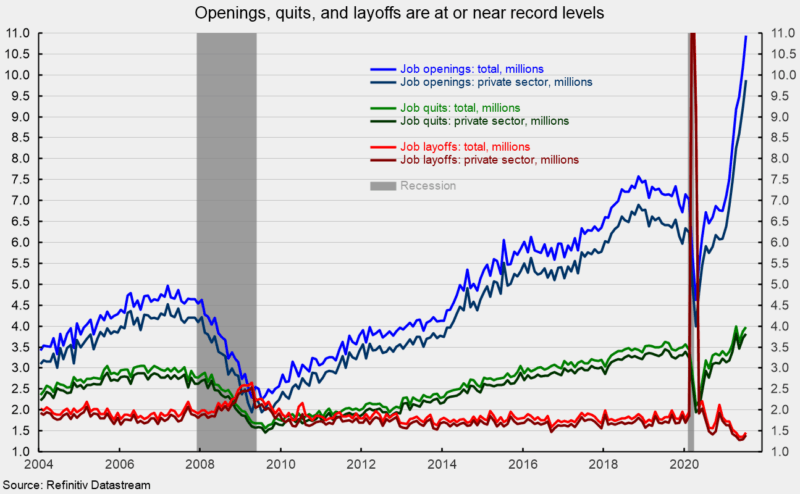 The total job openings rate, openings divided by the sum of jobs plus openings, rose to a record 6.9 percent in July while the private-sector job-openings rate surged to a record 7.3 percent.

Private hires in July totaled 6.166 million versus 6.827 million in June. At the same time, the number of private-sector separations rose to 5.515 million in July, up from June’s 5.350 million. Within separations, private quits were 3.815 million (versus 3.713 million in June) and private layoffs were 1.399 million, up from 1.300 million in the prior month (see first chart).

From the worker perspective, labor market conditions remained very favorable in July. The number of openings per job seeker (unemployed plus those not in the labor force but who want a job) jumped to a record high 0.766 in July, up from 0.655 in June, and above the previous record high of 0.721 in October 2019 (see fourth chart).

Overall, today’s job openings data continue to suggest a very tight labor market. However, the weaker-than-expected August jobs report showed a net increase of just 235,000 payroll jobs, though the weakness was largely concentrated in Leisure and hospitality as well as retail employment. The poor showing for leisure and hospitality and retail reflects the impact the surge in new Covid cases is having on consumers and businesses. Still, private-sector surveys suggest businesses are struggling to find and retain qualified workers. These conflicting messages cloud the economic outlook.

This article, Job Openings Hit Another Record High in July, was originally published by the American Institute for Economic Research and appears here with permission. Please support their efforts.