Labor, Materials, and Logistical Struggles Continue for the Manufacturing Sector 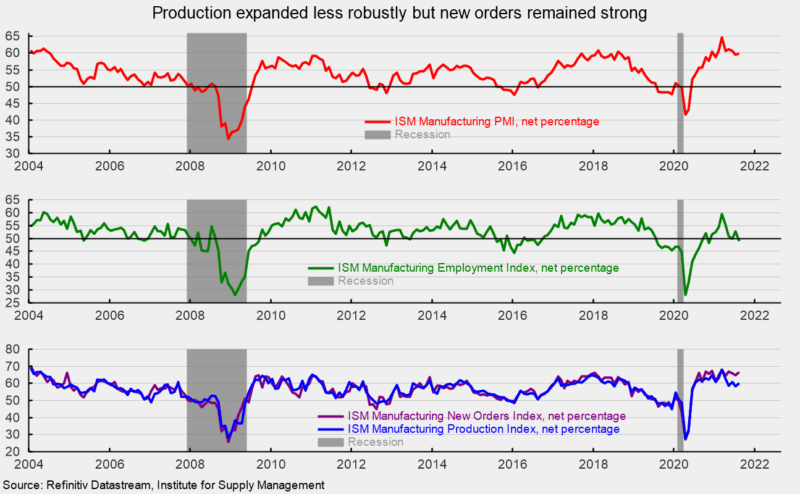 The Institute for Supply Management’s Manufacturing Purchasing Managers’ Index rose to 59.9 in August, up 0.4 points from 59.5 percent in July and equal to the average over the last 12 months. August is the 15th consecutive reading above the neutral 50 threshold but is the second month below 60 following a run of five consecutive months above 60 (see top of first chart). The survey results suggest that the manufacturing sector continues to expand at a robust pace.

The Production Index registered a 60.0 percent result in August, a gain of 1.6 points from 58.4 percent in July. The index has been above 50 for 15 months. (See bottom of first chart). The 12-month average is 62.0, down slightly from 62.2 last month but remained above 60 for the fourth consecutive month.

The Employment Index decreased in August, falling back below the neutral 50 level to 49.0 percent (see middle of first chart). The soft reading may be reflecting the inability to hire rather than the lack of desire to hire. According to the report, “Strong new-order levels, low customers’ inventories and expanding backlogs belied the reduction in employment strength. Survey panelists’ companies are still struggling to meet labor-management plans, but despite a contracting index, there were positive signs compared to recent months: An overwhelming majority of panelists indicate their companies are hiring or attempting to hire, with about 35 percent of comments — a decrease from previous months — expressing difficulty in filling positions. A significant number of panelists note increasing employee-turnover rates, continuing a trend evident in the comments in July.”

The Bureau of Labor Statistics’ Employment Situation report for August is due out on Friday, September 3rd. Consensus expectations are for a strong gain of 750,000 nonfarm payroll jobs including the addition of 28,000 jobs in manufacturing. The unemployment rate is expected to fall to 5.2 percent. However, the ADP employment estimate for August was released this morning and predicted a gain of just 374,000 private-sector jobs, well below expectations. It should be noted that while the trends in ADP and BLS data are similar, the monthly numbers can diverge significantly.

The Backlog-of-Orders Index increased in August, coming in at 68.2 versus 65.0 in July. This measure is just 2.4 points below the record-high 70.6 result in May (see second chart). The index suggests manufacturers’ backlogs continue to rise rapidly.

Customer inventories in August are still considered too low, with the index coming in at 30.2, up from a record-low 25.0 percent in July (index results below 50 indicate customers’ inventories are too low; see second chart). The index has been below 50 for 59 consecutive months. Insufficient inventory may be a positive sign for future production.

The index for the net percentage of manufacturers saying that prices for input materials are increasing fell again in August but remained high at 79.4 percent versus 85.7 percent in July. Rising input costs reflect shortages of materials, labor and production issues, and logistical and delivery problems. Those problems are worsening with the pickup in new Covid cases.

Supplier deliveries slowed again in August though the pace slowing was less than in July as the index declined to 68.5 from 72.5. August was the third decline in a row, though the index remains very high.

Overall, demand for the manufacturing sector remains robust but labor difficulties and logistical problems continue to hamper the ability to meet that demand. The recent surge in new Covid cases is compounding these problems. It may take some time for supply to catch up with demand, but the period of increased price pressure is unlikely to result in a 1970s-style inflationary spiral.

This article, Labor, Materials, and Logistical Struggles Continue for the Manufacturing Sector, was originally published by the American Institute for Economic Research and appears here with permission. Please support their efforts.