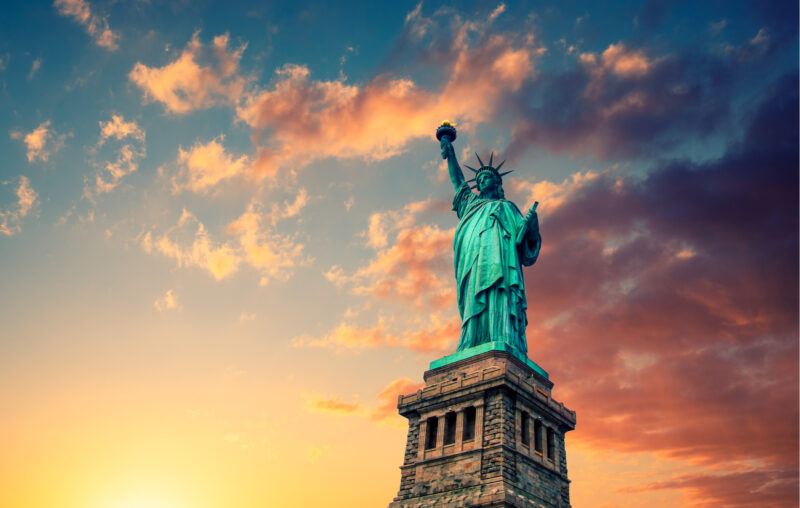 I finished reading Prof. Randall Holcombe’s book Liberty in Peril: Democracy and Power in US History during the 2020 election. I have yet to hear any candidate say the word “liberty” and would be shocked if I did.

We are bombarded with messages for candidates and messages merely imploring us to vote. Some Americans relish what they think they’ll get as a result of the election; others dread what they fear will happen. In any case, we accept that, for all its flaws, democracy is the way the United States is supposed to work. We almost never think about whether the policies the candidates favor are consonant with the freedom Americans were supposed to have — freedom to live their lives as they choose.

In his book, Holcombe (professor of economics at Florida State) argues that democracy was not the way the country was supposed to work. Our founding philosophy was not that democracy should prevail, but instead that liberty should prevail — that the reason for government was to protect the individual’s freedom, not to subject him to the will of the majority. Over time, the philosophy of liberty has been shoved aside and today democracy rules to the point where, as the author puts it, liberty has an almost quaint air about it.

Holcombe begins his history not with the Constitution or even with the colonists, but with the Iroquois, the largest confederation of Indians that European settlers had to deal with. The Iroquois had an unwritten constitution and its key principle was unanimity. Colonists who became familiar with the Iroquois system commented on its “absolute notion of liberty.” The Iroquois had a “Great Council” composed of tribal chiefs, but it did not act like we expect legislatures to act — imposing decisions on the people.

Instead, the Great Council facilitated the building of consensus among the tribes. Questions were debated and then the chiefs would return to their tribes to assess the sense of their members. Not until a proposal (and I wish Holcombe had said what kinds of issues the Iroquois dealt with) was acceptable to all the tribes was it adopted. That “debate it until we have consensus” mode meant that little was done, but that was, to the Iroquois, preferable to forcing people to abide by rules they had not agreed to.

The British colonists found it frustrating to deal with the Iroquois because their representatives always said, “We must take this proposal back to our Great Council for consideration,” but they incorporated the unanimity principle into their own Albany Plan of Union, drafted in 1754. That Plan was never put into effect, but it called for unanimous consent among the colonies for any action to be taken. Consensus was required, not majority rule.

The first government formed in the United States was the Articles of Confederation, adopted in 1781. Most historians brush right on past the Articles, but Holcombe thinks them worth analysis. Under the Articles, we had a unicameral legislature without any federal executive or judiciary. Proposed amendments required unanimous consent. The central government had little power, as you would expect from a people who had just waged a long war to be rid of a government with, most thought, too much power to violate individual liberties. The central government could not levy taxes directly, but had to request funds from the states. Holcombe finds virtue in that arrangement, since each state could decide whether the expected benefit of turning funds over to the central government was worth giving up the best use of those funds within its own borders.

Life in the United States under the Articles was less than ideal, particularly in the way some states interfered with interstate commerce, but those problems might have been dealt with by amending them. Indeed, that was the very purpose of the convention called in 1787 that we call “the Constitutional Convention.” It was supposed to be a convention, however, for considering amendments to the Articles, and more than a few of the delegates objected to the way certain leaders decided to draft an entirely new plan of government instead.

For all the Constitution’s restrictions on federal authority and its famous “checks and balances,” Holcombe finds that liberty was much more secure under the Articles. That was especially so because the federal government was no longer accountable to the states, but was a power center unto itself. Furthermore, consensus was diluted because the Constitution could be amended with only two-thirds of the states agreeing, rather than all. And most troubling of all, the powers given to the federal government were vaguely worded, such as to “regulate commerce” and “promote the general welfare.” While the drafters of the Constitution were fearful of democracy, they opened the door to its growth.

In the decades prior to the Civil War, democracy slowly gained ground against liberty. An intriguing instance was the “reform” of the Post Office in 1851. Until then, it had operated as a profitable public entity, charging differential rates. Under the new law, rates were made uniform, thus subsidizing postal customers in remote, western areas at the expense of those in the heavily populated east. The upshot was that the government was beginning to pick winners and losers through policy.

The Civil War (or the War Between the States, as Holcombe argues it’s more accurately called) vastly expanded the power of the federal government and put the states in a subservient position. The promotion of the economic interests of some Americans at the expense of others became widespread and blatant. An egregious example was the way the lobbying group for Union veterans, the Grand Army of the Republic, managed to expand benefits dramatically, covering more and more soldiers and their families with increasingly large payments. An interesting historical note Holcombe includes is that President Grover Cleveland, who had been popular with the G.A.R. until 1887, lost its favor when he vetoed a bill that he thought went too far. A large reason for Cleveland’s loss the following year to reliably pro-veteran Benjamin Harrison was that bit of fiscal responsibility.

Also in the decades after the Civil War, economic regulation meant to benefit some groups at the expense of others was common. The distinct but related Populist and Progressive movements drove the country further into democracy and away from the protection of liberty. For example, states were given the green light by the Supreme Court to interfere in private contracts by dictating prices grain-elevator owners could charge farmers. Government had turned from protecting liberty to promoting the economic interests of politically influential groups. The same was true for regulation of railroad rates by the Interstate Commerce Commission. And the government also intervened in “the money issue” by first printing great quantities of paper money (“greenbacks”) and later putting great quantities of silver into circulation at the behest of debtors who didn’t want to repay their debts in gold that was appreciating in value.

The First World War led to a burst of government activity that undercut liberty, including freedom of speech, but after the end of the war, there was a “return to normalcy” under Warren Harding and Calvin Coolidge. Even this period, however, was not one where liberty regained much lost ground. The War Finance Corporation, begun during the war, remained alive throughout the 1920s to make business and agricultural loans; the Inland Waterways Corporation was created to operate barges on the Mississippi River, and the Agricultural Credits Act to lend money to farmers; and in 1924, the nation’s first Immigration Act was passed, among other federal interventions having nothing to do with the protection of liberty. Moreover, during the 1920s, the government was very active in pursuing antitrust cases —attacking business operations simply because they were “too big” and supposedly threatened competition.

In short, the bad habit of extending the government’s scope was not at all cured during the “Roaring 20s.”

And then it got much worse under Coolidge’s successor, Herbert Hoover. Hoover, notes Holcombe, was a Progressive who thought that government authority should be exerted to improve the country and then, once the Depression began on his watch, to bring the country out of it. Most politicians in both parties favored federal policies meant to revive the economy, but they made things worse during Hoover’s administration. When Franklin D. Roosevelt took over in 1933, his whirlwind of federal activism dramatically transformed the nation. Numerous boards, commissions, and agencies issued mandates and prohibitions. Liberties that Americans had always assumed were theirs, such as the freedom to set their own prices or grow what they chose on their land, were abrogated.

For a while, the Supreme Court blocked some, although not all of the government’s authoritarian programs on constitutional grounds, but after Roosevelt’s court-packing proposal in 1937, Chief Justice Charles Evans Hughes came around to the new “progressive” understanding of the government’s proper role. Social Security is a good example. Nowhere in the Constitution is the government authorized to run a retirement program, but as Holcombe writes, “If the Constitution, thus interpreted, gives the federal government the power to run a compulsory retirement program, it is difficult to see any constitutional limits on the programs that the federal government is permitted to undertake.”

There have always been people who prefer to get what they want through predation rather than production, Holcombe observes. In our early history, the producers were protected by the law, but now the predators are fully in control, using the law as a sword to take from and control the producers.

In the end, Holcombe is deeply pessimistic. Liberty is certainly in peril — what’s left of it. “A utilitarian undercurrent,” he writes, “has arisen in the nation that is willing to weigh the costs of sacrificing a little more liberty in exchange for other goals. Liberty is not taken for granted; it is willingly sacrificed.”

Can anything rekindle the love that Americans once had for liberty and reverse the upward ratchet of government control? Our author doesn’t address that question, but I believe that our only hope is a revival of moral education in America, so that children are taught that it is just as wrong to get the government to use coercion, as it is for them to do so themselves.

This article, Liberty in Peril, was originally published by the American Institute for Economic Research and appears here with permission. Please support their efforts.