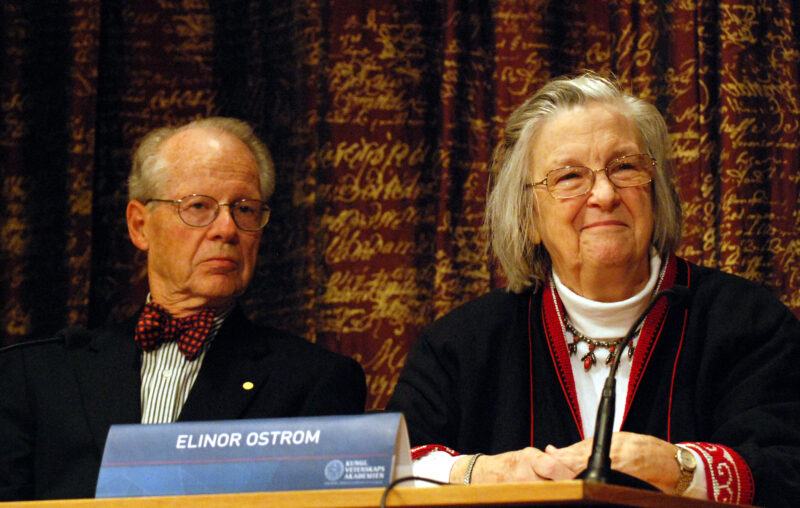 Elinor Ostrom’s family resided in Beverley Hills, but she grew up a “poor kid.” No one in her family had ever attended college, for which her mother saw no need, but she obtained her bachelor’s degree with honors at UCLA. Discouraged from studying mathematics because she was female, she was denied admission to UCLA’s economics graduate program on the grounds that she lacked the requisite mathematical background. Opting instead to study political science, she met a professor 14 years her senior who would become her husband and life-long collaborator. Moving with him to Indiana University, she could not obtain a faculty position, only securing a post by volunteering to teach an evening course that no faculty member wanted. Against the prevailing economic view that without external authority, shared resources such as fishing stocks and grazing lands would be depleted, she showed that local users can make effective arrangements for their preservation. Although not an economist, in 2009 she became the first woman to win the Nobel Prize in the field. This month marks the 10th anniversary of her death.

A key theme of Lin Ostrom’s work was polycentricity. A monocentric system is one in which all the problems faced by a community or organization are addressed in a top-down fashion by a single authority, such as the federal government. Such a unit determines the one best solution and then imposes it on everyone else. By contrast, a polycentric approach gets people and groups working together to devise a means of solving problems, embodying the view that those best qualified to do so are usually those who live with them day to day. A central government may have the power to impose a solution and even punish those who do not abide by its dictates, but such approaches are often poorly tailored to local conditions and deprive people of the opportunity to work it out for themselves, thereby stunting their development as citizens.

Not long after the Ostroms arrived in Indiana, they studied the impact of police force size on the satisfaction of citizens. A large force would enjoy economies of scale, such as greater bargaining power in purchasing and greater efficiency in training programs. Yet they found that small and intermediate-sized forces were usually preferred, because they could base their work on personal relationships with members of the community and better tailor their operations to each community’s needs. Polycentricity does not mean keeping everything small. Instead, it means allowing those functions that work best at a small scale, such as policing, to be carried out by more local organizations, while allowing other functions, such as purchasing and training, to be carried out cooperatively and at a larger scale. The same holds true for other sectors, such as education, in which local school boards offer key advantages over state-wide or national-level approaches.

Here emerges another key theme of Ostrom’s work—cooperation. Many political theorists long assumed that the best way to solve a problem was to impose a solution from above. Absent such direction, they thought, those involved would pursue their own interests to the exclusion of others, producing chaos and ruin. Moreover, those directly involved in a situation, such as school boards, are often composed of ordinary citizens who possess no advanced training. Only experts, they supposed, could arrive at the best solution to any problem. Yet many experts often have little or no skin in the game and only study a situation long enough to devise a solution, whereas locals, who must live with it long term, have a powerful incentive to monitor and keep revising arrangements to make them work. The value of good solutions is so great that it gives communities an incentive to cooperate effectively.

The Ostroms’ modus operandi was highly cooperative and collaborative. At Indiana University, they founded not a department, a school, or an institute but a workshop, the Workshop in Political Theory and Policy Analysis. As such, it was both highly practical and even artisanal in its ethos. The emphasis was on working together as a team to understand real-world problems and identify real-world solutions. The purpose was not to impose a particular set of disciplinary principles or methodologies, but to look at problems from whatever mix of perspectives seemed best to understand them. Its studies ranged from Kenya to Nepal to Los Angeles, and many points in between. Lin Ostrom was famous for her dedication to her students and colleagues, and when she won the Nobel Prize, she donated her share of the stipend to the workshop.

Ostrom is best known for her work on the commons, responding to a highly influential 1968 paper by biologist Garrett Hardin on the so-called “tragedy of the commons.” Recalling a 19th-century essay by William Lloyd, Hardin suggested that unregulated common grazing land, the commons, would inevitably be over-grazed, writing

Every man is locked into a system that compels him to increase his herd without limit—in a world that is limited. Ruin is the destination toward which all men rush, each pursuing his own interest in a society that believed in the freedom of the commons.

Of course, this analysis is not limited to grazing land, and can be expanded to include natural resources such as rivers, fish stocks, and the atmosphere, as well as any common resource, such as an office stapler or copy machine. On Hardin’s account, people free to use such resources will tend to exhaust them, and sometimes destroy themselves in the process. Only coercive rules can hold them in check.

Ostrom tested this notion in the real world, finding that in many cases centrally imposed solutions were not successful. When she spoke with people who actually shared common resources such as lakes, fishing stocks, and wells, she discovered that they had found ways to avoid the tragedy of the commons, and they did so in a self-governing fashion. For such solutions to work, certain conditions, which she called design principles, are necessary. The group in question must have a clear boundary; it must be able to match use to local conditions; its members must be able to modify the rules; its rule-making must be respected by outside authorities; its members must be able to monitor one another’s conduct; it must have sanctions available for those who violate rules; it must have a means of resolving disputes; and responsibility must be nested in tiers from the lowest level up. Such arrangements, she demonstrated, can preserve resources not just for the next season but also for future generations.

Another key principle of Ostrom’s approach is her empiricism. She was more of an Aristotelian than a Platonist, in the sense that when faced with a question, she would often seek out a community and see how they were addressing it, making a point of talking with the people who were doing so. She was not opposed to theory, having spent virtually her entire adult life in partnership with a theorist, her husband Vincent, but she believed that observation has an essential role to play in advancing understanding. She famously held the view that any resource arrangement that works in practice can work in theory. In other words, the world of fish is not bounded and defined by what our nets can catch, and any approach to resource management that is working in practice represents a call to revise any theory that says that it cannot exist. She had little patience for Procrustean theoreticians, who would cut and stretch the world to fit their models.

Ostrom also prized diversity. What worked in Mexico might not work in Nigeria, and what worked in Nigeria might not work in Indonesia. Unlike many contemporary thinkers and politicians, she was not looking for one-size-fits-all solutions. She genuinely cherished diversity in institutional arrangements, partly because she found that such arrangements would need to be as diverse as the communities they were meant to serve. Such communities are multi-faceted and distinct, and they need correspondingly diverse approaches. Yet beneath the multiplicity of factors that always require consideration, she saw universal and enduring principles. For example, caring for resources needs to be a common task, organized less from the top down than from the bottom up, and requires people to know each other sufficiently to be able to trust one another. Insofar as contemporary life is becoming more distant and impersonal, she might say, it is stunting the development of thriving communities and human beings.

Thanks to Ostrom’s work, we have rediscovered some things about persons and communities long forgotten by many economists. The world is not governed by an inviolable dog-eat-dog law. People do not in all things put themselves first. Trust and cooperation are not for suckers. Instead, given the opportunity, community members will often join together to sort out their problems, share both authority and responsibility, and develop solutions far better than any off-site group of experts. In her work, we find an empirical validation of the importance of Tocqueville’s voluntary associations, which he called the “fundamental science” of democracy. Ostrom helped to ensure that such voluntary collaboration lives on as one of the best remedies for the development-stunting effects of administrative centralization.

This article, Lin Ostrom’s Defense of Voluntary Association, was originally published by the American Institute for Economic Research and appears here with permission. Please support their efforts.