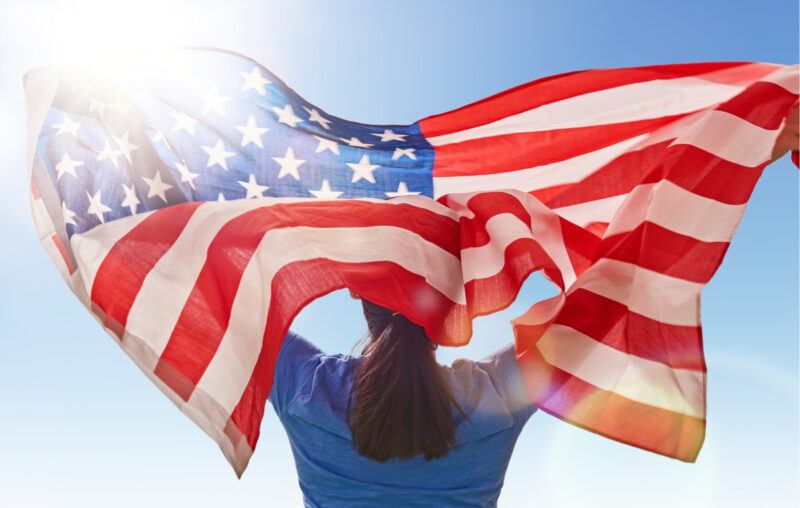 “Sientese, por favor,” I said to somebody’s ancient abuela standing at the fringes of an impromptu post-fireworks boardwalk pizza party.

She glanced longingly at the four feet of open bench space next to me but hesitated, maybe wondering why an old, bald, oversized gringo would ask her to please sit down next to him. Her reluctance was not likely Fauci-related as not one person in a hundred at the festivities, and no one in her group, donned an obedience mask.

So after a brief pause, I added, “es un pais libre, todavia, mas o menos,” the best Spanish I could muster for “it’s still a free country, kinda sorta.” Then she looked at me like I was certified loco en la cabeza as she eased off, ostensibly for another slice of pizza.

I momentarily felt like a boiled frog, but my wife returned unexpectedly quickly with blueberry ice cream, one of the gazillion distractions that presumably make modern life worth living.

It wasn’t until the next morning, when I read a story about American companies and even the Federal Retirement Thrift Investment Board investing in China despite its poor records on human rights and Covid lockdowns, that it dawned on me:

Immigrants continue to stream to America for the pizza, blueberry ice cream, and other economic benefits, not the freedom, or lack thereof.

The babbling Babel I heard during the fireworks show was not about immigrants celebrating the birthday of their new country, it was about a free show. The Arabic, Spanish, and Eastern European tongues I heard all about me were not unusually loud or numerous, there simply were fewer English-speaking Americans about. The crowd at the beach fireworks show was much thinner than usual.

Why would so few Americans turn out for Independence Day fireworks on a night with perfect weather forecasted and delivered?

Inflation seems to be taking its toll on some resort towns, with whispers that this year is worse than last, despite the much tighter grip of COVIDocracy a year ago. Beachgoers still come, but they bring their own food instead of buying it at always pricey boardwalk shops. Daytrippers abound. The hotels are full-ish but not brimming like they were pre-COVID. Cheaper overnight alternatives, like inland campsites, spring up like spring wildflowers.

Then there is “progressive” angst against the recent SCOTUS decisions, tepid as they were. One need not organize a “F*** the Fourth” march to decide to sit this Independence Day out, especially with all those maskless (and, gasp!, possibly unvaccinated) people about.

There also appears to be some MAGA hesitancy, too, a sense that America is rapidly becoming too Marxist to celebrate. A book with that thesis sold over a million copies since its publication last summer.

Instead of making America great (or green) again, maybe Americans should strive for MAFA, making America free again. MAFA is a laudable goal in and of itself but also one likely to make America great (and green) again too. America became great, in the sense of large and in the sense of super, in the first place due to its freedom, especially its economic freedom, not due to its human rights abuses.

The policy path to MAFA is clear, deregulate everything from Amtrak to monetary policy, while reinvigorating the Third Sector (nonprofits) and forming a Ministry of Truth to police all claims, and only claims, made by governments, government officials, and politicians. Returning to the Rule of Law by punishing government officials who try to silence political opponents would help too!

The political path to MAFA, though, is fraught. Too many Americans, Left and Right, mostly products of inferior government schools, believe that “freedom” means their freedom to tell other people how to behave, down to the most intimate details of what they put into, or take out of, their own bodies.

Even more disconcerting, both major political parties have become so thoroughly statist that critics Left and Right speak of the “Uniparty” as an established fact. While political competition in America persists on some margins, vested interests in healthcare, higher education, military defense, and science-technology have created self-perpetuating and self-aggrandizing “complexes” or “rackets” that seem impervious to rational policy discourse.

Indeed, the people who best understood the policy responses to COVID followed the money, not “the” science. That Fauci and Company received numerous nontrivial royalty payments (aka kickbacks) from pharmaceutical developers reveals only part of a giant ranch full of corrupting cash cows. The interests involved are so powerful that they can even persuade Americans that they have the right to forcefully inject experimental non-vaccine vaccines into their bodies and that plant foods like nitrogen and carbon dioxide are so bad for the environment that everyone will die unless major disruptive economic changes are made right now.

One hope for MAFA is that Americans will realize that Martin Luther King, Jr. was right when he wrote from a Birmingham jail in 1963 that “injustice anywhere is a threat to justice everywhere” and that untruth is the root of all injustice. Both untruth and injustice eventually collapse from their own weight but the resulting crash can come unexpectedly, crushing innocent bystanders. It’s best if America cuts down its rotting Tree of Liberty on its own terms so that a new MAFA tree can grow rapidly in the full cleansing sunlight.

This article, Make America Free Again (MAFA), was originally published by the American Institute for Economic Research and appears here with permission. Please support their efforts.