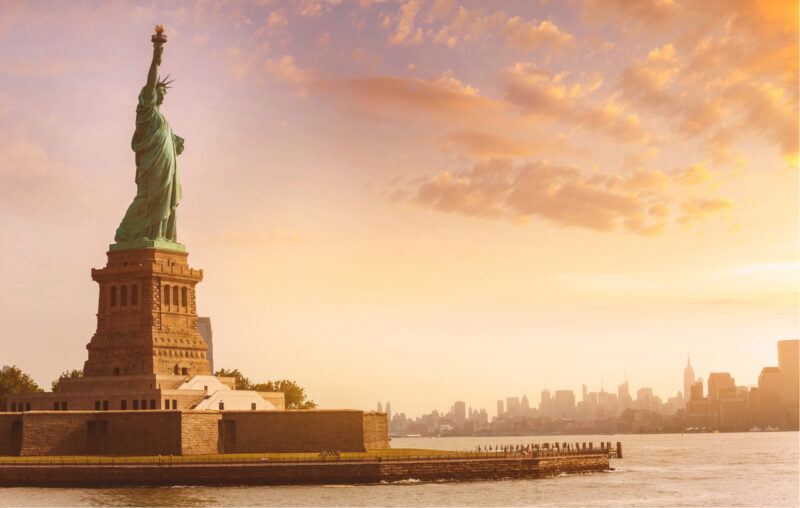 US officials are keeping very busy in the world. Yet very few of Washington’s actions have much to do with protecting America. Instead, the foreign policy establishment believes that its primary role is to run the world.

The Department of Defense was originally known as the Department of War, a far more accurate name. If DOD defends anything today, it is client states overseas. Called “allies,” most are security liabilities, threatening to drag America into wars which they are unwilling to fight themselves.

Such is the case of Ukraine. Stuck in a bad neighborhood, it faces a limited invasion by Russia. Such a conflict, though horrific, would have little direct impact on America. In fact, the US has long been thankfully aloof from terrible wars that ravaged other nations and regions.

For instance, from 1967 to 1970 Nigeria battled a secessionist movement which founded the Republic of Biafra. Tens of thousands died in battle. Up to two million civilians also died, mostly from starvation. Americans barely noticed. In 1971 India intervened in a genocidal Pakistani civil war, in which the military, controlled by a West Pakistani elite, murdered as many as three million Bengali Pakistanis. Later that decade came the mad Khmer Rouge, who slaughtered as many as two million out of a Cambodian population of barely eight million. In the 1980s Iraq and Iran battled old-style, with trenches and human wave tactics. Total deaths ran around a half million. The 1990s featured horrific conflicts in the Balkans, Liberia, Rwanda, and Sudan. Up into the 2000s the Democratic Republic of Congo was the epicenter of a multi-sided international war that killed as many as six million people, the most since World War II. The 2010s featured the Syrian civil war, in which hundreds of thousands died.

All of these were terrible, costly, criminal, tragic conflicts. None much affected America. That reflected the reality which the foreign policy establishment continues to do its best to hide, that the US is extraordinarily safe, probably the most secure great power ever. The US enjoys vast oceans east and west and weak Pacific neighbors north and south. America dominates the Western Hemisphere, which made it so difficult for the Soviet Union to turn communist revolutions, like the one in Cuba, into military gains during the Cold War.

This safety at home allowed the US to be a minor military power until World War II. The nation’s Founders feared a standing army. When danger loomed the new country relied on sometimes barely functional militias and an expanded regular army. That system proved sufficient to defeat the British invasion in the War of 1812 but not to seize Canada, steadily but not easily drive Indian tribes off their ancestral lands, and grab half of Mexico. During the Civil War the US briefly became a great power with a large army and navy, but rapidly demobilized afterwards.

The Spanish-American War solidified US domination of the Western Hemisphere and launched the once small republic on the eastern seaboard as a Pacific power. However, Washington emphasized naval power, which reinforced the American mainland’s security and thus security from Europe’s large land powers. The US briefly mobilized for World War I, but afterwards returned to North America. Not until 1940 did Washington begin a global advance that essentially never stopped.

Yet even then US security proved paramount. America’s uniquely favorable position is why it could send the bulk of its military thousands of miles away. In every other nation—friends and foes alike—their homelands were the battlefields. That made Washington’s role essentially discretionary. There were important strategic reasons to ensure that a hostile power did not control Eurasia, hence the US backed the Soviet Union against Germany and then Western Europe against the USSR. Washington could act knowing that America was essentially secure against attack, other than the newly developing threat of intercontinental missiles.

And so it remains today. Although terrorism and cyberwarfare are serious concerns, they are not existential threats like those faced by Ukraine today.

The potential wars now being considered by US policymakers are discretionary. First is against Russia. No doubt Kyiv is stuck in a bad neighborhood and Moscow is acting badly. However, throughout most of America’s history Ukraine was part of the Russian Empire and then the Soviet Union. Glance at a map today. Ukraine is about as remote from the US as possible and virtually impossible for Washington to defend, especially alongside European governments with little interest in fighting for themselves, let alone non-allies.

Then there is China, with the most dangerous flashpoint being Taiwan. Beijing is America’s greatest future rival, likely a peer competitor, though its economic, social, and political weaknesses remain considerable. More importantly, it is unlikely to ever threaten the US homeland, roughly 8,000 miles away.

Nor is domination of Eurasia possible. The People’s Republic of China shares land borders with 14 nations. India will surpass the PRC’s population, has enormous economic potential, and possesses nuclear weapons. Russia is more a regional than a global power but retains a powerful military and shares Asia with the PRC. Even Japan, an island with a strong navy, would be no easy target for Beijing. Economic dominance may be foreordained, but that is a reality for, not a threat to, America.

Unfortunately, Taiwan, seized from Imperial China by Japan more than a century ago, is roughly 100 miles from the mainland, essentially the distance of Cuba from America. The cost of projecting sufficient US power to safeguard Taiwan almost to the PRC’s coast would be huge; China can use mainland bases and rely on missiles and submarines at far lower cost to deter American involvement.

Indeed, US policymakers are already squabbling over how to distribute limited resources. Elbridge Colby and Oriana Skylar Mastro, of the Marathon Initiative and Freeman Spogli Institute for International Studies, respectively, took to the Wall Street Journal to argue for China over Russia as the most important threat. “The U.S. has no hope,” they wrote, “of competing with China and ensuring Taiwan’s defense if it is distracted elsewhere. It is a delusion that the U.S. can, as Pentagon press secretary John Kirby said recently, ‘walk and chew gum at the same time’ with respect to Russia and China. Sending more resources to Europe is the definition of getting distracted. Rather than increasing forces in Europe, the U.S. should be moving toward reductions.” The question they leave unanswered is how much can America afford to spend and risk to protect one small nation half a world away?

Iran also is high on Washington’s enemies list, with even the Biden administration issuing ambiguous threats of military action after wasting its early months and failing to aggressively work to revive the nuclear deal abandoned by President Donald Trump. Tehran is a malign regime, but no threat to America. The Pentagon is allied with every opponent of Iran in the Middle East, has ringed the Islamic Republic with military bases and deployments, possesses nuclear weapons as well as overwhelming conventional forces, and in 2020 spent 56 times as much as Tehran on its military. Washington is guarding allies more than itself, countries that naturally prefer the US contain Iran.

Similar is the case with North Korea. Supreme Leader Kim Jong-un fulminates against America only because the US is over there, with troops on his border, bombers overflying the peninsula, and warships—an “armada,” as Trump referred to it—heading up the peninsula’s coast. The Republic of Korea has more than 50 times the GDP and twice the population of the North: why doesn’t it build a military to match Kim’s forces?

Indeed, North Korea’s development of nuclear weapons and long-range missiles capable of hitting the US will eventually make American involvement in what essentially is a peninsula-wide civil war impossible. For even if a war began as a conventional fight, Pyongyang would always have an incentive to threaten use of nuclear weapons if it faced defeat. And what President would risk multiple US cities to save Seoul?

Sometimes Washington bizarrely but overtly turns policy over to supposedly friendly states. For instance, the administration is sending ships and planes to defend Saudi Arabia and the United Arab Emirates as they commit murder and mayhem against their poor neighbor, Yemen. Three presidential administrations have spent 7 years assisting the royals in committing war crimes. Although the insurgents, dominated by the group Allah Ansar, or Houthis, are no friends of liberty, Riyadh’s human rights record ranks with bottom-feeders such as North Korea and Eritrea. The UAE bests China but lags behind Russia. And they have created a humanitarian crisis—hundreds of thousands of civilians dead, millions displaced, and millions more suffering from malnutrition and disease. All for their own interest, not that of the US.

Americans are fortunate, living safe and secure lives in relative geographic isolation. Alas, as President John F. Kennedy once observed, “Life is unfair,” a sentiment seconded by President Jimmy Carter more than a decade later. Ukraine and Taiwan are unlucky, but that is no justification for American military involvement in war, especially one which could go nuclear. US policymakers should remember America’s unique geographic position, which means the wars being debated in Washington today are discretionary.

Policymakers should put the interests of the American people first. How to best protect them? Remember the disasters resulting from Washington’s recent string of endless wars. Ponder the coming fiscal tsunami. Recognize that not all spending on the military has much to do with defending America. Treat additional wars as an absolute last resort.

There will be “wars and rumors of wars,” Jesus told his followers (Matthew 24:6), which describes today. However, the existence of wars does not require that the US join them. Washington policymakers should ensure that Americans are involved in as few such conflicts as possible.

This article, Making US Foreign Policy About Americans, was originally published by the American Institute for Economic Research and appears here with permission. Please support their efforts.