Manufacturing Output Falls for a Second Consecutive Month in June 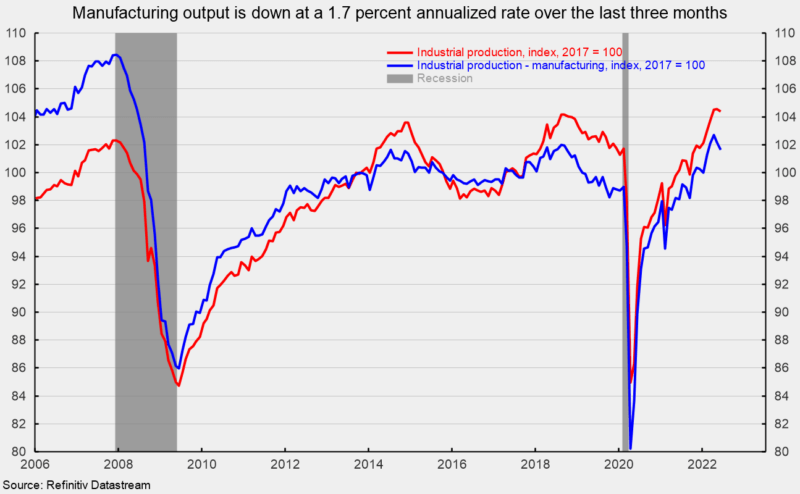 Total industrial production decreased 0.2 percent in June after being unchanged in May and rising 0.8 percent in April (see first chart). Over the past year, total industrial output is up 4.2 percent while the annualized rate is 2.5 percent over the last three months.

Manufacturing output – about 74 percent of total output – posted its second decline in a row, falling 0.5 percent for the month (see first chart). From a year ago, manufacturing output is up 4.2 percent but over the last three months, has fallen at a 1.7 percent annualized rate.

Manufacturing utilization decreased 0.5 point to 79.3 percent but remains above its long-term average of 78.2 percent. However, it remains well below the 1994-95 high of 84.7 percent.

Mining output accounts for about 16 percent of total industrial output and posted a strong 1.7 percent increase last month following a 1.2 percent gain in May (see top of second chart). Over the last 12 months, mining output is up 8.2 percent. Utility output, which is typically related to weather patterns and is about 10 percent of total industrial output, fell 1.4 percent with natural gas up 2.2 percent but electric down 2.0 percent. From a year ago, utility output is up 1.4 percent.

Total vehicle assemblies fell to 10.31 million at a seasonally-adjusted annual rate. That consists of 10.01 million light vehicles (see third chart) and 0.29 million heavy trucks. Within light vehicles, light trucks were 8.26 million while cars were 1.75 million. Assemblies have risen sharply from the lows but remain below pre-pandemic levels.

All other industries combined (total excluding energy, high-tech, and motor vehicles; about 66 percent of total industrial output) fell 0.4 percent in June (see bottom of second chart). This important category is 3.1 percent above June 2021.

Overall, industrial output declined in June, resulting in a weak back-to-back performance. Manufacturing output fell for the second month in a row on widespread softness. Ongoing labor shortages and turnover, rising costs and shortages of materials, and logistics and transportation bottlenecks continue to be challenges for the industrial sector. Furthermore, an intensifying Fed tightening cycle, fallout from the Russian invasion of Ukraine, and Covid-19-related problems in China remain significant threats to the economic outlook. Caution is warranted.

This article, Manufacturing Output Falls for a Second Consecutive Month in June, was originally published by the American Institute for Economic Research and appears here with permission. Please support their efforts.