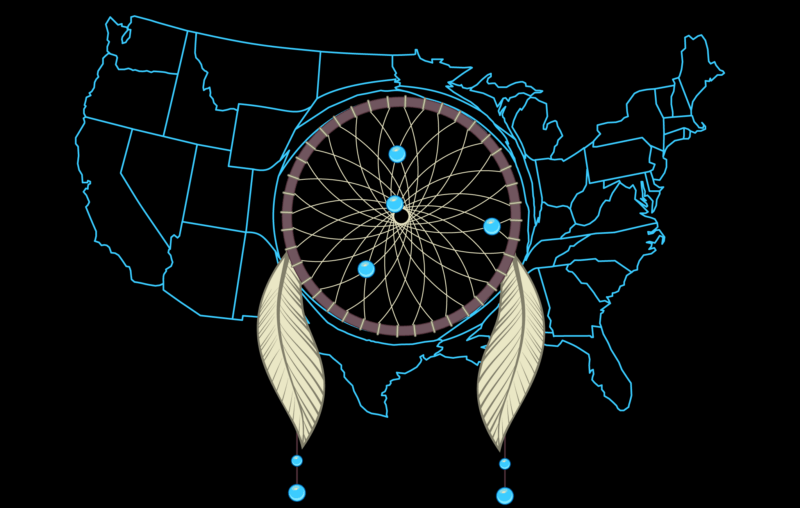 Drive about 30 minutes south of Charlotte and you’ll find the bedroom community of Rock Hill. Just over the border in South Carolina, the Catawba tribe of Native Americans lives and works on a reservation there, just a short commute away from America’s third-largest banking center.

Recently, these original Americans established something incredibly promising: a digital SEZ (special economic zone) similar to that offered by Estonia.

The Baltic region’s freest country pioneered the e-residence program. That program allows one to be a legal resident of Estonia but live anywhere in the world. In other words, one can live in Egypt but incorporate her business in Estonia. She benefits from lower taxes, lighter regulation, and a stable business climate even if she incorporates far away.

The Catawba Indians have taken note.

They call it the Green Earth Zone (GEZ):

SEZs often rely on tax incentives. But with our status as a sovereign jurisdiction, we are also able to create a best-in-class regulatory climate for the digital, fintech and blockchain sectors. Our plan is to allow these businesses to operate with certainty, and under regulations that protect consumers that help mature the industry. The GEZ (Green Earth Zone) will not only serve companies domestically and internationally but will create tremendous economic opportunities for our people of the Catawba Nation.

The play here is referred to as jurisdictional arbitrage. That means the Catawba are creating greener pastures for innovators and entrepreneurs – right in the middle of an empire in decline.

The savvy Catawba tribe realizes that the US government is becoming increasingly predatory and unfriendly to enterprise – particularly Web3 industries such as cryptocurrency and decentralized finance (Defi).

As legacy financial institutions collude with the federal government to shore up their power in the face of competitive threats, they will lobby to strangle Web3 industries with red tape. After all, the federal government, Federal Reserve, and the legacy financial sector are locked in a corrupt ménage à trois. Wealthy elites benefit most from interventionist fiscal and monetary policy, as economist Richard Cantillion explained in 1755.

As inflation and debt spending continue, we, our children and grandchildren stand to inherit a colossal mess – all while subsidizing the wealthiest people in America along the way. We all know that’s gravely wrong, no matter who voted for whom or which party is in charge. But as long as we operate in the dollar’s matrix, we will be victims of these corruptive forces.

Cryptocurrencies and decentralized finance (Defi) allow one to escape this matrix. Native commercial sovereignty could provide some protection, that is unless the federal government continues its dark history of suppressing and marginalizing native peoples.

Bureau of Indian Affairs (BIA) commentary on the extent of Indian commercial sovereignty is murky:

Tribes possess all powers of self-government except those relinquished under treaty with the United States, those that Congress has expressly extinguished, and those that federal courts have ruled are subject to existing federal law or are inconsistent with overriding national policies. Tribes, therefore, possess the right to form their own governments; to make and enforce laws, both civil and criminal; to tax; to establish and determine membership (i.e., tribal citizenship); to license and regulate activities within their jurisdiction; to zone; and to exclude persons from tribal lands.

Limitations on inherent tribal powers of self-government are few, but do include the same limitations applicable to states, e.g., neither tribes nor states have the power to make war, engage in foreign relations, or print and issue currency.

Following a cursory review, therefore, it’s unclear what sort of customer and company protections the Green Earth Zone can offer at this stage in the development of Web3. Hopefully, it can be an additional layer of protection against a financial-government complex that is increasingly predatory and that sees cryptocurrency as a threat to its hegemony.

But the GEZ is not without competition.

On the beautiful island of Roatan in Honduras, legal and governance entrepreneurs have set up Próspera, a highly advanced SEZ. Indeed, Próspera recently launched a $100 million security token raise such that accredited investors can make fractional investments in Prosperat real estate:

“By partnering with Securitize to issue our Security Token Offering (STO), we give our investors a frictionless and legally up-to-date way to have direct ownership in Próspera’s first Charter City development.”

Legacy powers should take note: Small, sovereign nations like Liechtenstein, Estonia, Singapore, and Dubai are successful because they are small and relatively nimble, they have liberalized, and they think of themselves as startups competing against great powers. We are likely to see more upstart zones such as Próspera and the Green Earth Zone, particularly in areas seeking to bootstrap commercial inclusion and growth for their people.

The emergence of new SEZs creates competitive governance opportunities. Unlike legacy states, these jurisdictions run like businesses, making them formidable – even in the shadow of lumbering powers such as the US. As each new system emerges, the cost of exiting a failing jurisdiction goes down. Each new zone represents an escape hatch that helps expand the sovereignty of free peoples, especially those who create entrepreneurial value.

When you couple competitive terrestrial governance with cloud governance (jurisdictions that exist everywhere and nowhere), entrepreneurs will find opportunities to get out from the thumb of authorities bent on funding technocratic dreams and war machines. This creates a strange set of ironies for the 21st century, three of which come immediately to mind:

As the United States continues to decline, we need to find the exits.

If the Green Earth Zone project is successful, Native Americans – of all people – will have saved a few scraps of freedom. That they’re willing to share that freedom with the rest of us speaks volumes about the integrity of the Catawba people.

This article, Native American Tribe Hopes to Colonize the World With Digital Freedom, was originally published by the American Institute for Economic Research and appears here with permission. Please support their efforts.