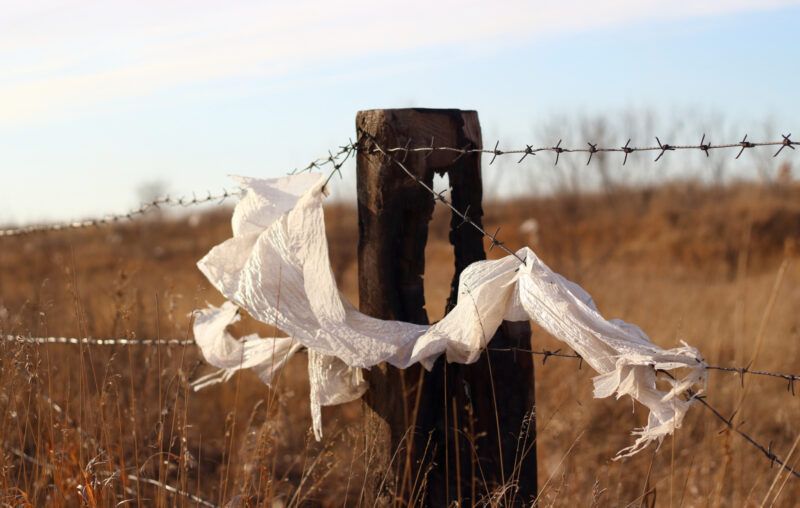 New Jersey has outlawed plastic bags, paper bags, and styrofoam containers—and yet its efforts to be green are backfiring. The New York Times recently reported, with faint amusement, on “New Jersey Bag Ban’s Unforeseen Consequence: Too Many Bags.” And indeed there is something farcical about a statewide bag prohibition that leads to a veritable avalanche of reusable bags collecting in people’s homes, garages, and recycling containers:

The well-intentioned law seeks to cut down on waste and single-use plastics, but for many people who rely on grocery delivery and curbside pickup services their orders now come in heavy-duty reusable shopping bags—lots and lots of them, week after week.

Lawmakers are perplexed. Yet this whole fiasco is so eminently and utterly predictable, not only exemplifying the inability of repressive laws to fully effect the changes they seek, but the tendency to actually make the problem worse. Friedrich Hayek, the Nobel Prize-winning economist, called it a fatal conceit. Hubristic technocratic managers with the power of coercive policymaking believe that complex human behavior can be guided, God-like, toward some higher ideal. The Garden State’s experience is a textbook case in the ironclad rule that unwise and unjust rules will, without fail, fail.

The main problem, the Times implies, was in lawmakers’ failure to account for the growing proportion (more than 6 percent) of folks getting their groceries online. “There is clearly a hiccup on this, and we’re going to solve it,” said New Jersey Senator Bob Smith, co-sponsor of the bill that made plastic disposables into Public Enemies. No, Bob, this is not just a “hiccup,” and no you aren’t going to “solve it.” This is a fundamental feature of virtue-lawmaking. Heavy-handed administrative tinkering always ends up this way. People cannot, as a rule, be persuaded to do the “right thing” by being forced to. One reason is that free people resent the imposition and find a kaleidoscope of creative workarounds (according to the Times, a “Ms. Ryder” has taken to stealing plastic bags from local recycle bins to support her delivery service business). But more importantly. it’s not at all clear what the “right thing” actually is. Very often, the optics of an issue don’t conform to the reality, and we are unfortunately easily misled by breathless emotionalism. Politics, which is the fine art of turning optics into power, is no help here. Lawmakers are quite willing, even eager, to turn our misguided assumptions into “well-intentioned” policies. The plastics crisis is a perfect case in point. Things are simply not as they seem.

To begin, plastic bags in particular aren’t as bad as we think. According to National Geographic, not known for its anti-environment spin, “…a major advantage of plastic bags is that, when compared to other types of shopping bags, producing them carries the lowest environmental toll.” The Danish Environmental Protection Agency made big, but apparently short-lived, waves when it concluded that humble shopping bags (the low density polyethylene variety) “are the carriers providing the overall lowest environmental impacts.”

The Danish bureaucrats also reached a number of other counterintuitive conclusions. Incinerating these bags has a lower environmental impact than recycling them does. In a well-documented lifecycle cost analysis, one of the worst environmental bag options is organic cotton reusable totes. Yes, even the ones with a green leaf or edifying message on the tag. In fact, if we are honest in our total accounting, “ego” bags must be reused 20,000 to offset their impact. Even if you reused your eco-bag twice a week (and didn’t forget it half the time like I do), it would take 192 years for the bag to wipe away its environmental footprint. In New Jersey, where reusable bags are now piling up, they seem to prefer PET (Polyethylene terephthalate) bags, which are kind of cool and hip-looking, but anything but green. It takes approximately 84 reuses of a PET bag to offset its impacts, which means that “Mr. Otto,” who has 101 of these bags now ludicrously stashed in his hall closet, must make 8,484 trips to the grocery store, or about 80 years-worth, before he can personally clean up his (unanticipated) impact. This is what is meant by things getting worse through feel-good legislation. Not only has New Jersey’s law not fundamentally changed human behavior, but virtue-signaling proponents of bag bans actually saddled the planet with even more environmental baggage. It would be comical if it weren’t so sad.

Few things are more depressing than a bag in a pond or a styrofoam cup in a gutter, blowing in the wind, shredded and collecting in alleyways. But hating them aesthetically is far from an adequate justification for banning them. We are far better off managing issues around proper trash collection and effective cleanup, especially when the broader environmental costs of a plastic ban actually hurt the environment we are professing to “save.” The best eco-behavior, as far as we can rationally tell, is to re-use those awful plastic bags we hate as many times as we can. This is why “Hate,” like “Love,” isn’t enough to build policy on. We have to have our wits about us if we are to steer a prudent course.

This fracas is just another in a long line of examples justifying the founding principles of limited government. It’s not just that meddling regulators irritate and constrain freedom-loving individuals, it’s that they never get it right. In their perpetual pursuit of some “optimal” balance between competing demands, policymakers (who have no magical insight) invariably chase the low-hanging fruit, the hot-topic on any given day which has the electorate most riled. When we allow the power of the state to descend into the most basic elements of day-to-day life, such as what kind of container a business can transport its products in, we see the “fatal conceit” manifest in the most unfortunate and counterproductive ways. Maybe, since it seems intent on paving its way to hell, New Jersey can redeem itself by mandating the use of, say, organic handbaskets. At least that way folks will have a place to stash all the good intentions.

This article, New Jersey Bag Ban, was originally published by the American Institute for Economic Research and appears here with permission. Please support their efforts.