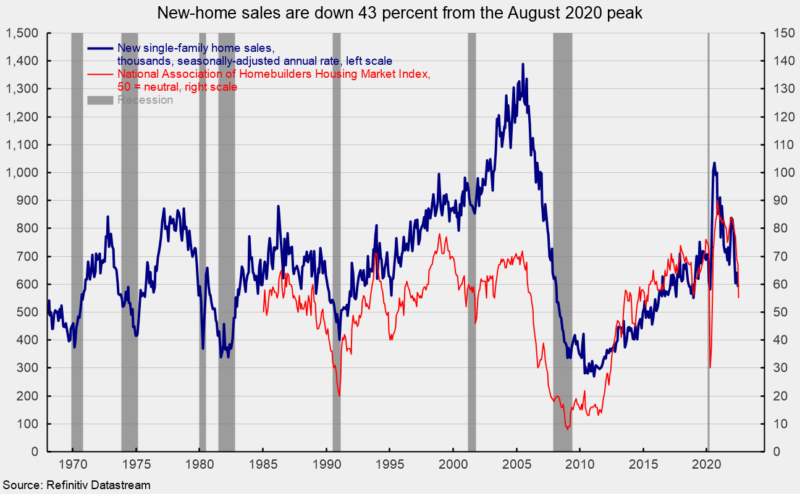 Sales of new single-family homes declined in June, falling 8.1 percent to 590,000 at a seasonally-adjusted annual rate from a 642,000 pace in May. The June fall was the fifth drop in the last six months,  leaving sales down 29.7 percent from the December 2021 level, and down 43 percent from the August 2020 post-recession peak (see first chart).

Meanwhile, the National Association of Home Builders’ Housing Market Index, a measure of homebuilder sentiment, fell again in July, coming in at 55 versus 67 in June. That is the seventh consecutive drop and the second-largest monthly decline in the index’s history, putting the result at the lowest reading since May 2020. The index is down sharply from recent highs of 84 in December 2021 and 90 in November 2020 (see first chart).

According to the report, “Builder confidence plunged in July as high inflation and increased interest rates stalled the housing market by dramatically slowing sales and buyer traffic.”  The report adds, “In another sign of a softening market, 13% of builders in the HMI survey reported reducing home prices in the past month to bolster sales and/or limit cancellations.”

Sales of new single-family homes were down in three of the country’s four regions in June. Sales in the South, the largest by volume, fell 2.0 percent, while sales in the Northeast, the smallest region by volume, fell 5.3 percent, and sales in the West decreased 36.7 percent. Sales in the Midwest jumped 42.3 percent for the month. Over the last 12 months, sales were down across all four regions, led by a 37.9 percent fall in the Northeast, followed by a 32.9 percent drop in the West, a 22.1 percent decrease in the Midwest, and an 8.7 percent retreat in the South (see second chart).

The median sales price of a new single-family home was $402,400 (see third chart), down from $444,500 in May and a record high $457,000 in April (not seasonally adjusted). Meanwhile, 30-year fixed rate mortgages were 5.51 percent in late July, up sharply from a low of 2.65 percent in January 2021. The combination of high prices and rising mortgage rates is reducing affordability and squeezing some buyers out of the market.

The total inventory of new single-family homes for sale rose 2.2 percent to 457,000 in June, the highest since April 2008. That puts the months’ supply (inventory times 12 divided by the annual selling rate) at 9.3, up 10.7 percent from May, 60.3 percent above the year-ago level, and the highest since May 2010. The months’ supply is very high by historical comparison (see fourth chart). The high level of prices, elevated months’ supply, and surge in mortgage rates should weigh on housing activity in the coming months and quarters. However, the median time on the market for a new home remained very low in June, coming in at 2.5 months versus 2.7 in May.

This article, New Single-Family Home Sales Fall for the Fifth Time in Six Months, was originally published by the American Institute for Economic Research and appears here with permission. Please support their efforts.