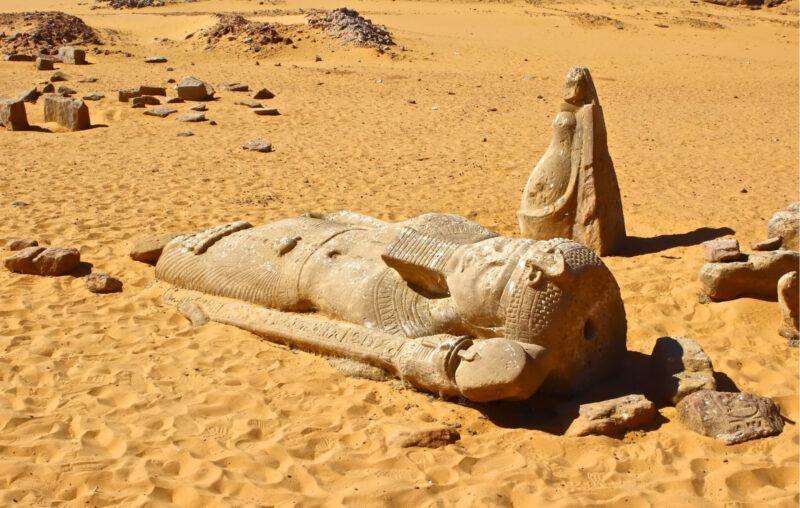 Few spectacles in history rivaled that of a Roman triumphal procession. Originally for victorious commanders but later exclusively for the emperors, the elaborate ceremonies could last a day or even longer.

One aspect amid all the pomp was the distinctive role played by the servus publicus. His job was to hold the crown above the triumphator‘s head while constantly telling him to remember he is a mortal man.

For death stalks us all, even tyrants with absolute power. Going further, though absolute power corrupts absolutely, as Lord Acton observed, absolute power itself eventually falls into corruption. This inevitability is aptly depicted by Percy Bysshe Shelley in his sonnet “Ozymandias.”

Shelley gives in a few short lines an indelible image of absolute power long since fallen. A traveler tells the narrator of having seen a crumbled, fallen statue, with its “shattered visage” half sunk into the desert sand. It bore a “frown,/ And wrinkled lip, and sneer of cold command,” and this empty boast:

And on the pedestal, these words appear:

My name is Ozymandias, King of Kings;

Look on my Works, ye Mighty, and despair!

Ozymandias was the Greek name for Pharaoh Ramses II. Shelley was reportedly inspired by the British Museum’s acquisition of a large fragment of such a statue. Archeologists recently discovered another statue of Ozymandias in an equally apt setting, “Groundwater in a Cairo slum.”

A half-covered visage of cold command

In Spring 2020, when public health officials including Dr. Anthony Fauci suddenly did an about-face on wearing masks, many people fell in line. They were led to believe the change of official guidance was indicative of a sudden convergence of scientific certitude. It didn’t occur to them that it bespoke a high degree of uncertainty combined with the prideful folly of needing to appear to be doing something.

This uncertainty is the very reason why mandates are wrong. No rational leader in a free society uses emergency powers to force a behavior on the dice throw that it might work. No one even remotely familiar with the propensity for public policies to harbor unseen, unintended negative consequences in the short and long term could have countenanced such a rash reaction. Bastiat wept.

After all, nothing prevented these same officials from offering people the best information at the time in an unclear environment, providing advice and recommendations on what to do rather than ordering them about — i.e., treating Americans as free-thinking fellow citizens, their co-equals in the eyes of God and the Constitution. When they issued unthinkable mandates (not just masking but also lockdowns, business closings, etc.) and told people and the credulous press that they were merely “following the science,” the question should obviously have been whether the research literature offered a slam-dunk justification for such extreme emergency orders.

Anything less, however, and they should have leveled with us and offered their recommendations. As the situation became clearer, they could have then adjusted their recommendations without fearing damage to their credibility. If anything, such honesty and humility would have enhanced public trust. Then we would actually have been “in this together,” rather than antagonized by a blundering bunch of political actors reimagining the fallacy of Oz and now increasingly desperate to keep people from seeing the little old charlatan behind the curtain.

The curtain has been breached, and in recent days, even several Democratic-led states and cities have announced the end of their mask mandates. Happily, some of these moves have included the end of mask mandates on schoolchildren, a particular evil. January’s close witnessed a sudden willingness within well-reputed liberal establishment media outlets — including NPR and the New York Times — to challenge compulsory child-masking for the very reasons that experts and parents of school-age and special-needs kids have been warning about for two years: Masking harms their mental well-being, brain development, speech development, communication skills, hearing, facial recognition, emotion recognition, social interaction, classroom participation, and overall learning. Children are not capable of wearing masks all day long like trained surgeons, and the masks they wear are inefficacious even for masks (which are ineffective at controlling the spread of Covid-19 or other respiratory viruses), have leaks and gaps, and become filthy, leaving them vulnerable to other infections. Children are at such an inordinately low risk of developing severe Covid-19 that the supposed benefits of compulsory child-masking simply cannot outweigh the enormous costs of what amounts to child abuse.

But the current decline of mask mandates isn’t enough. These cruel policies must be toppled permanently. Some former maskers now advocating for removing the mandates seem to recognize this fact, but can they be trusted during the next cold season? Even if they don’t mean it, however, acknowledging the need to get rid of the mask orders is a political nod to the people’s desire to rid themselves and their children of the worthless damned things.

Then there are the “forever maskers.” They seem to be a coalition of tyrants and snitches as well as terrified adults evincing the mental damage of years of believing the worst of government Covid propaganda. Forever maskers want a permanent hypochondriarchy — a bizarre and terrible police state that would promote public health by beating people in the streets for showing their faces in public.

The terrified deserve our pity, the snitches our contempt, but the tyrants? They must be defeated entirely. Let there be no doubt. Cold command is their ultimate goal.

To them, loss of the mask orders is not a fall, it’s a tactical retreat. Their next offensive may be days away if they can sway enough people to fear a new “stealth Omicron.” Or it could come next cold and flu season. The Atlantic is ready to sacrifice even sensibility for the comfort of coerced masking. See the Feb. 20 column by senior associate editor Rachel Gutman called “Mask Mandates Are Illogical. So What?” Already they are prepping nonsense talking points about how masks somehow “prevented flu” even as Covid-19 spiked in the previous two cold and flu seasons. It’s quite the turnaround from the Spring 2020 reversal, where they justified abandoning years of randomized controlled trials showing masks’ lack of effect against flus and other respiratory viruses by arguing that Covid-19 was somehow different.

So Ozymaskias is crumbling. But it’s not enough for mask orders to come down when the politics of coerced masking takes a setback. These horrible, unscientific, illiberal, anti-human mandates must be sunk forever in the desert sands of history along with the rest of their Covid-excused tyrannies.

This article, Ozymaskias, was originally published by the American Institute for Economic Research and appears here with permission. Please support their efforts.