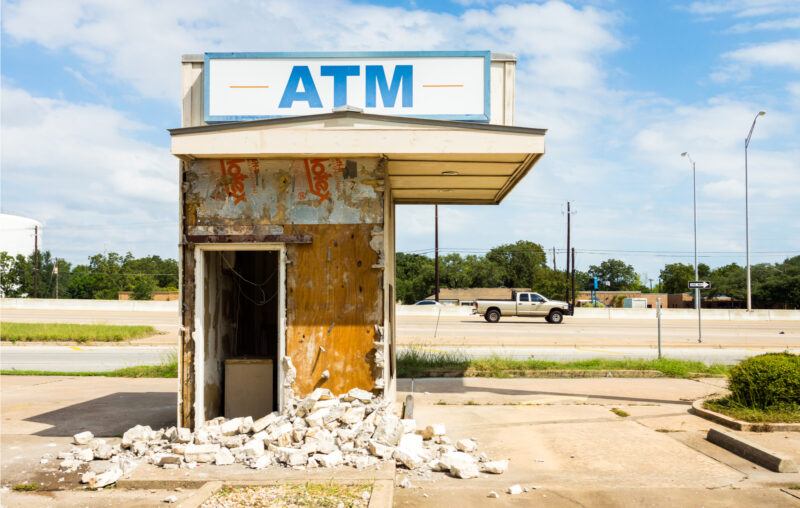 In previous posts, I suggested ways to cope with rising prices (COLA) and food insecurity (wild game and liberty gardens). Inflation creates many problems, including an increased risk of payment system glitches, like the shuttering of banking and credit card networks, leaving individuals economically stranded. Cyberattacks, power outages, financial crises, and other unexpected shocks can slow, or even disable, the payment system.

True, a de facto or de jure moratorium on payments would ensue but don’t forget that if you can’t make payments, your employer and other debtors (like Social Security or retirement or investment funds) may not be able to pay you either. How, then, will you buy gas or groceries?

The most obvious way to hedge against payment system risk is to hold some cash. Many people who lived through the Great Depression stockpiled paper money for the rest of their lives, just in case their bank went under or the ghost of Roosevelt, the President who seized their gold, declared another bank “holiday.” Few of those people are left, however, and many members of our youngest adult generation go out of their way to avoid carrying cash. Even some old timers like me use paper notes only when absolutely necessary.

Moreover, it would be rather daft to hold onto much physical cash when I-series bonds are yielding north of 9 percent. That’s still a losing proposition in inflation-adjusted terms but literally better than the nothing that those limp pieces of paper pay. If you think that you’ll just saunter down to your bank and fill out a withdrawal slip like it was 1999, think again. Even if some banks remain open, they hold very little physical cash these days. Any functioning ATMs will also be quickly stripped.

Given the current rate of inflation, a better approach might be to stockpile the nonperishables that you will need. Gasoline is tricky but certainly many foods can be stocked for long periods. As long as you eat it up before it goes bad, it will actually save you money by buying now instead of after prices go up (again).

What happened the last time America’s payment system crashed, during the Great Depression? Various local and state systems failed repeatedly starting in 1930, and in early March 1933 President Roosevelt euphemistically declared a national “bank holiday.” To stop currency hoarding, gold exportation, and bank failures, the new commander-in-chief shut down all of the nation’s banks, including the Federal Reserve banks, under the authority of Section 4305 of the “Trading with the Enemy Act” of 1917.

When the emergency holiday would end, no one knew. Yet little riotous looting occurred. Americans remained calm and “made do,” adapting to circumstances in nuanced ways. Some municipalities, for example, kindly locked up perpetrators who could not pay cash fines, giving them “three hots and a cot” for a day. Though unconstitutional, other municipalities issued tax anticipation scrip to employees, who then made local payments with it. Some churches stopped passing the collection plate, while others accepted handwritten IOUs. More formally, the IRS accepted checks that it knew it could not deposit for collection until after the crisis.

Private businesses also responded according to circumstances. Railroads, for example, allowed passengers to travel home without tickets. Guardian Life Insurance Company of America, a mutual life insurer, rightly felt that it had to make prompt payment of all verified death claims, so it always kept more cash on hand than its for-profit competitors did. During the bank holiday, it used its stash of cash to buy money orders, which it sent to beneficiaries via American Express. If the money order system had also shut down, it was prepared to courier physical cash to beneficiaries from the home office in Manhattan, or to direct its local agents to make cash down payments on its behalf. It probably could have borrowed informally too, from the few companies that found themselves with large, and hence dangerous, sums of cash on hand. Short-term interest rates were understandably high. Businesses that did not want to expose their money to default risk in uncertain times induced local police stations and private security firms to safeguard their cash.

Most wholesale businesses – manufacturers, importers, and the like – sold to each other and to retailers on credit, so most responded to the crisis simply by extending credit lines to existing trading partners. Many retailers did likewise. General credit cards were a postwar phenomenon. In the 1930s, many retailers maintained book accounts, much as colonial retailers did, or issued their own charge cards. But not everyone had credit accounts everywhere they shopped, so some large employers paid their workers with IOUs that local retailers were happier to accept than the promises of poor working stiffs.

Small change was in such short supply that some retailers sent shills to competitors to buy trifles with $20 bills. Some businesses responded by saying that customers could tender whatever denomination they liked, but no change would be made. Perhaps most tragically of all, many a piggy bank met an untimely death, seemingly vindicating those who kept coins in easily opened glass jars. But precisely because the piggies could be raided only by destroying them, they served as commitment devices and hence held more coins, all else constant, than the jars did. Some bartering also began to break out before the holiday ended.

By mid-March, most of the banks that would reopen (some 4,000 closed permanently) already had, and the payment system had returned to its normal, fragile self. The crisis led directly to the formation of the Federal Deposit Insurance Corporation, which has proven itself a wash at best.  It also led to a large devaluation of the US dollar and the demise of domestic gold holdings and retail gold convertibility. In other words, Americans today still suffer the costs imposed by the government’s New Deal solutions.

What would Americans get if the payments system shuts down again? That would depend on the exact nature of the crisis, but a central bank digital currency (CBDC) is a good guess. Most retailers today are not prepared to extend credit to their customers and no longer even have a way to take credit card impressions. Maybe it would dawn on them to snap pics of credit/debit cards but many customers might worry about allowing them to do that. Innovators might come up with other clever workarounds but most businesses will be afraid to do anything without regulatory pre-approval. Bitcoin on the blockchain or via Lightning Network, or FinTech platforms like Venmo, might seize market share but not very much if on and offramps remain blocked. As tensions mount, people will call upon the government to “do something,” just as in March 2020. One can almost hear President Biden or Harris mumbling through a Rooseveltian “You have everything to fear except CBDC” speech. But at least Twitter users will be able to demur openly. Not that it will matter.

This article, Preparing for Payment System Fragility, was originally published by the American Institute for Economic Research and appears here with permission. Please support their efforts.