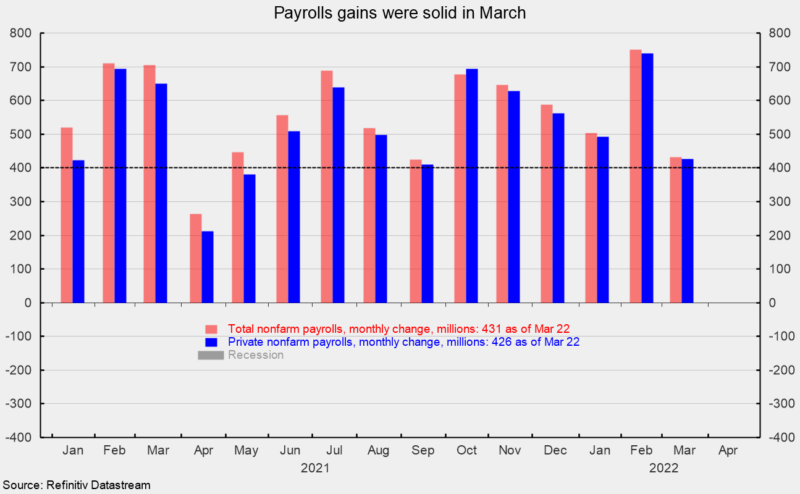 Despite the strong, broad-based gains over the past year, only about half of the industry groups in the employment report are above their pre-pandemic levels. Transportation and warehousing is the largest gainer, with payrolls more than 10 percent above pre-pandemic levels (see fourth chart). That may be a positive sign for some of the logistical problems plaguing U.S. businesses.

The employment-to-population ratio, one of AIER’s Roughly Coincident indicators, came in at 60.1 percent for March, still significantly below the 61.2 percent in February 2020 (see bottom of fifth chart).

The March jobs report shows total nonfarm and private payrolls posted more strong gains. Both are close to matching pre-pandemic levels as is the civilian labor force. However, with population growth, labor force participation remains significantly below pre-pandemic rates. Getting people into the labor force and employed would likely help ease upward pressure on consumer prices. Upward price pressures have resulted in a new cycle of Fed policy tightening, raising the risk of a policy mistake. Furthermore, geopolitical turmoil surrounding the Russian invasion of Ukraine has had a dramatic impact on capital and commodity markets, launching a new wave of potential disruptions to businesses.  The outlook has become highly uncertain and extreme caution is warranted.

This article, Private Payrolls Add 426,000 Jobs in March, was originally published by the American Institute for Economic Research and appears here with permission. Please support their efforts.