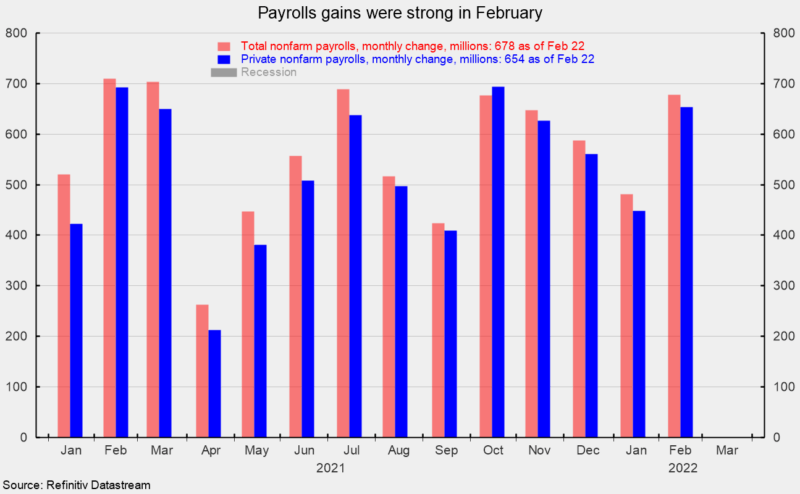 Despite the strong, broad-based gains over the past year, less than half of the industry groups in the employment report are above their pre-pandemic levels (see fourth chart).

The average workweek rose to 34.7 hours in February while the average workweek for production and nonsupervisory workers rose 0.1 hour to 34.1 hours. Combining payrolls with hourly earnings and hours worked, the index of aggregate weekly payrolls gained 0.8 percent in February and is up 10.8 percent from a year ago while the index for production and nonsupervisory workers rose 1.0 percent and is 12.3 percent above the year ago level.

The employment-to-population ratio, one of AIER’s Roughly Coincident indicators, came in at 59.9 for February still significantly below the 61.2 percent in February 2020 (see bottom of fifth chart).

The better progress on achieving the pre-pandemic unemployment rate is largely due to people dropping out of the labor force. Approximately 592,000 workers are still out of the labor force compared to February 2020 (see sixth chart). The overall participation rate was 62.3 in February versus a participation rate of 63.4 percent in February 2020 (see bottom of fifth and sixth charts).

Overall, the outlook is for continued recovery. However, even with favorable signs such as stronger payroll growth, upward price pressures are likely to continue for a while longer. Those pressures are leading to a new cycle of Fed policy tightening, raising the risk of a policy mistake.  Furthermore, geopolitical turmoil surrounding the Russian invasion of Ukraine has had a dramatic impact on capital and commodity markets, launching a new wave of potential disruptions to businesses.  The outlook has become highly uncertain and extreme caution is warranted.

This article, Private Payrolls Post Another Strong Gain, Adding 654,000 Jobs in February, was originally published by the American Institute for Economic Research and appears here with permission. Please support their efforts.