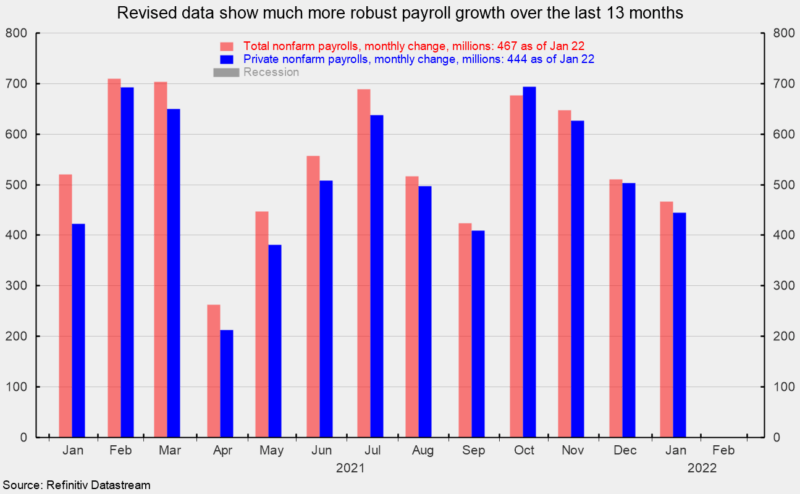 U.S. nonfarm payrolls added 467,000 jobs in January, easily beating expectations. The January data reflect annual benchmark revisions as well as updates to seasonal adjustments. The revised data now show more robust payroll growth over the past 13 months with an average monthly gain of 549,000 (see first chart). Private payrolls posted a 444,000 gain in January with revised data now showing an average monthly gain of 514,000 (see first chart). Both total nonfarm payrolls and private payrolls are less than 2 percent below their February 2020 peaks (see second chart) with total nonfarm down by 2.9 million and private payrolls down by 2.1 million.  At the current average monthly gain, both should completely recapture losses within six months.

Over the last six months, data now show steady improvement in terms of industries reaching pre-pandemic levels of employment. In September 2020, only transportation and warehousing was above the February 2020 level. Since then, professional and business services, information, retail, and financial have all recovered to pre-pandemic levels (see fourth chart).

Average hourly earnings rose 0.7 percent in January, putting the 12-month gain at 5.7 percent. The average hourly earnings data should be interpreted carefully, as the concentration of job losses and recovery for lower-paying jobs during the pandemic distorts the aggregate number. The average workweek fell to 34.5 hours in January, possibly reflecting the impact of new Covid cases. Combining payrolls with hourly earnings and hours worked, the index of aggregate weekly payrolls gained 0.5 percent in January. The index is up 9.6 percent from a year ago.

The employment-to-population ratio, one of AIER’s Roughly Coincident indicators, came in at 59.7 for January still significantly below the 61.2 percent in February 2020 (see bottom of fifth chart).

The better progress on achieving the pre-pandemic unemployment rate is largely due to people dropping out of the labor force. Approximately 896,000 workers have dropped out of the labor force over the last two years (see sixth chart).The overall participation rate was 62.2 in January versus a participation rate of 63.4 percent in February 2020 (see bottom of fifth and sixth charts).

The January jobs report shows total nonfarm payrolls posted an unexpectedly strong gain, especially in light of the wave of new Covid cases spreading across parts of the country in January. Private payrolls were also strong. Revisions for all the data show generally more robust gains over the past year. At the current average monthly pace of gain, the U.S. economy could completely recover all the lost jobs within the next six months. Getting employees back on payrolls should help ease ongoing materials shortages and logistical problems, thereby easing upward pressure on consumer prices.  Slowing consumer spending would also help ease pressures.

Overall, the outlook is for continued recovery. However, even with favorable signs such as stronger payroll growth, upward price pressures are likely to continue for a while longer. Those pressures are leading to a new cycle of Fed policy tightening, raising the risk of a policy mistake.  Furthermore, 2022 is a Congressional election year and may lead to unexpected events given the intensely bitter partisan atmosphere and a deeply divided populace.

This article, Private Payrolls Show Surprising Strength in January, Adding 444,000 Jobs, was originally published by the American Institute for Economic Research and appears here with permission. Please support their efforts.