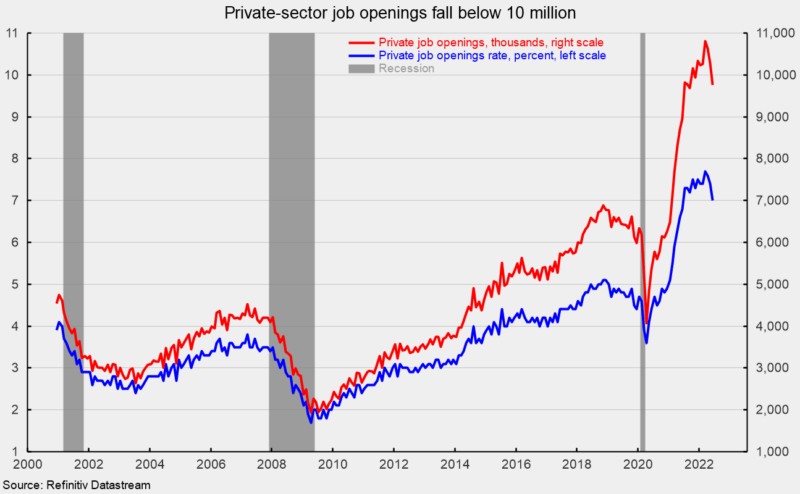 The latest Job Openings and Labor Turnover Survey from the Bureau of Labor Statistics shows the total number of job openings in the economy decreased to 10.698 million in June, down from 11.303 million in May; openings were a record-high 11.855 million in March.

The number of open positions in the private sector decreased to 9.766 million in June, down from 10.275 million in May and a record-high 10.812 million in March. June was also the first month below 10 million since November 2021 and the lowest level since September 2021 (see first chart).

The total job openings rate, openings divided by the sum of jobs plus openings, fell to 6.6 percent in June from 6.9 percent in May while the private-sector job-openings rate fell to 7.0 percent from 7.4 percent in the previous month (see first chart). The June result for the private sector is the lowest since June 2021.

Two industry categories still have more than 2.0 million openings each: education and health care (2.246 million) and professional and business services (2.009 million). Trade, transportation, and utilities (1.651 million) and leisure and hospitality (1.451 million) are above 1 million.

The number of private-sector quits fell in June, coming in at 3.999 million, down from 4.048 million in May (see second chart). Trade, transportation, and utilities led with 950,000 quits, followed by leisure and hospitality with 848,000 quits, and professional and business services with 738,000.

The quits rates among the private-sector industry groups are still dominated by leisure and hospitality with a rate of 5.4 percent, well ahead of professional and business services and trade transportation, and utilities, both with a 3.3 percent quits rate (see third chart).

The number of job seekers (unemployed plus those not in the labor force but who want a job) per opening ticked up slightly again in June, rising to 1.092 in June from 1.028 in May and a record low 0.957 in April. Before the lockdown recession, the low was 1.409 in October 2019 (see fourth chart).

Today’s job openings data add to the significant range of evidence that suggest the economy is weakening. While the still-large number of openings suggest the labor market remains tight, the deterioration at the margin is a warning sign. Caution is warranted.

This article, Private-Sector Job Openings and Quits Fall for a Third Consecutive Month, was originally published by the American Institute for Economic Research and appears here with permission. Please support their efforts.