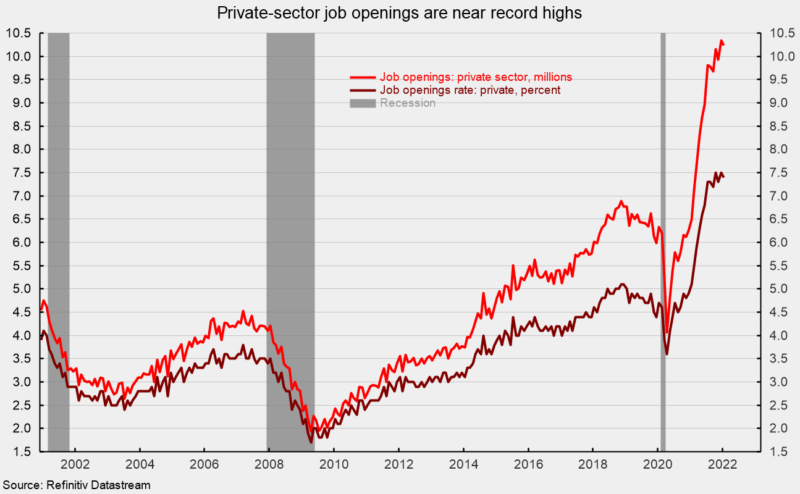 The total job openings rate, openings divided by the sum of jobs plus openings, dropped to 7.0 percent in January from 7.1 percent in December while the private-sector job-openings rate fell to 7.4 percent from a record-high 7.5 percent (see first chart).

Two industry categories have more than 2.0 million openings each: education and health care (2.129 million) and professional and business services (2.065 million). Trade, transportation, and utilities (1.834 million), and Leisure and hospitality (1.497 million) are both above 1 million.

The highest openings rates were in leisure and hospitality (9.9 percent), professional and business services (8.6 percent), education and health care (8.2 percent), manufacturing (6.4 percent), and transportation, and utilities, trade (6.1 percent) are all above the pre-lockdown-recession private-sector peak of 5.1 percent (see second chart). Among the private-sector industry groups, only construction (4.8 percent) is below 5.1 percent.

The number of private-sector quits fell for a second consecutive month, coming in at 4.025 million, down from 4.164 million in December and a record-high 4.266 million in November (see third chart). Trade, transportation, and utilities led with 1.005 million quits followed by leisure and hospitality with 856,000 quits, and professional and business services with 697,000.

The total quits rate fell to 2.8 percent for the month, down from 3.0 percent in the prior month while the private-sector quits rate fell to 3.2 percent versus 3.3 percent in December and a record-high 3.4 percent in November (see third chart). The quits rates among the private-sector industry groups are still dominated by leisure and hospitality with a rate of 5.6 percent, well ahead of the number two, trade transportation, and utilities, with a 3.6 percent rate, and number three, professional and business services, with a 3.2 percent quits rate. All the major groups within the private sector have a quits rate above the average over 2001 through 2019 except for construction (see fourth chart).

The number of job seekers (unemployed plus those not in the labor force but who want a job) per opening fell to 1.094 in January, a new record low. Prior to the lockdown recession, the low was 1.409 in October 2019 (see fifth chart).

Today’s job openings data continue to suggest a very tight labor market. The tight labor market is leading to significant turnover among employees and contributing to the headwinds facing businesses as they try to boost production. Compounding the difficulties are the surging disruptions to capital and commodity markets and the global economy due to the Russian invasion of Ukraine and subsequent sanctions imposed by supporters of the Ukraine people and government.

This article, Private-Sector Job Openings Fell Slightly in January but Remain Near the Record High, was originally published by the American Institute for Economic Research and appears here with permission. Please support their efforts.