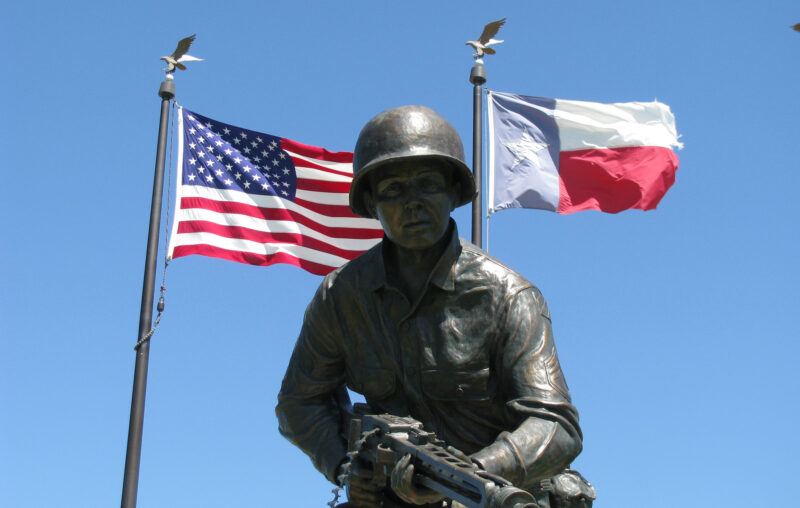 If some of our Army posts are to be renamed, it is appropriate that they be renamed after heroes from the ranks of the common soldier, or “Joes” as they came to be called during World War II. Further, many of our army posts were formed to receive soldiers during World War I, and so were named after generals of the Civil War, both Union and Confederate. Some of these posts should be renamed so as to recognize heroes of more recent wars.

I suggest Audie Murphy, our most decorated soldier of World War II, of Texas, as the new name for Fort Hood, Texas. Audie Murphy displayed courage in multiple engagements in Italy and southern France. During a particular German counter-attack, Murphy mounted a burning armored vehicle and fired its externally-mounted machine gun into the advancing Germans, killing or wounding 50 of them.

After the war, Murphy recounted his story in his autobiography, “To hell and back,” which was subsequently made into a blockbuster movie of the same name, starring Audie Murphy as himself. A film critic panned the movie, saying, “Murphy wiping out scores of the enemy singlehanded—not a little ridiculous.” It may have been ridiculous, but that’s what happened.

In the movie, Murphy popularized the term “dogface,” subsequently adopted by the 3rd Infantry Division as its own song. Here’s a rock version.

Henry Johnson of North Carolina, one of our most decorated soldiers of World War I, is an appropriate new name for Fort Bragg, North Carolina.

Johnson was stationed at an outpost in no man’s land when a German raiding party approached at night. He was discovered barely alive the next day, wounded multiple times, along with four dead Germans. Nicknamed “Black Death” by the Germans, it is crazy how this choir boy-looking man could have been such a killer!

Alvin York of Tennessee, another of our most decorated soldiers of World War I, provides an appropriate new name for Fort Campbell, Kentucky and Tennessee.

York’s unit was ordered to take a German machine gun nest, and several were killed and wounded in the effort. York then advanced on the machine gun nest single-handedly and, with precision, fired on the enemy, picking them off one by one. The Germans there then surrendered, as did others in the vicinity. York marched back with 130 prisoners of war.

In 1941, Sergeant York’s exploits were brought to the big screen. The movie was that year’s biggest money-maker, and Gary Cooper won the Academy Award for Best Actor for his leading performance.

Sergeant First Class Agustín Ramos Calero of Puerto Rico was another highly decorated soldier during World War II. Calero earned the nickname “the one-man army” for a firefight in which he single-handedly killed ten Germans and took as prisoners-of-war 21 more. Fort Buchanan, Puerto Rico, should be renamed after Sergeant Calero.

Master Sergeant Roy P. Benavidez of Texas was a highly decorated soldier during the Vietnam War. After stepping on a landmine, he willed himself to recover sufficiently to be re-deployed. Then, in a firefight that has come to be known as “six hours of hell,” he directed the defense of a small perimeter of soldiers while being wounded multiple times. The Army and Army National Guard have quite a few installations in Texas. It would be appropriate for one of these posts to carry Sergeant Benavidez’ name.

The renaming of an Army post should be a positive, not a negative statement. Renaming some of them should not be about erasing our history, but adding to our history. Heroes from the ranks of the common soldier should be honored. Heroes of more recent wars should be included, and the Civil War not so much. Our belief as Americans that all men are created equal is validated by the diversity of the heroes that have arisen from among the Joes. That belief would be undermined by establishing different criteria for different groups of us.

This article, Renaming Army Posts, was originally published by the American Institute for Economic Research and appears here with permission. Please support their efforts.