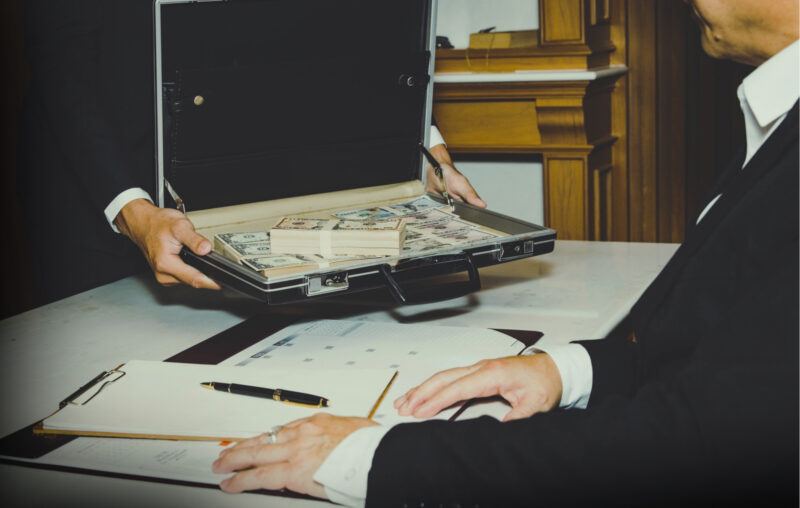 In the field of political economy in recent decades an important and valuable emphasis has been placed on “rent seeking,” defined as pressure groups lobbying for (and getting) special favors (bestowed on themselves) and disfavors (imposed on their rivals or enemies). It’s a key theme of “public choice” theorists, who tend to love free markets and constitutionally constrained states.

Rent seeking, however, is only the demand side of political favoritism; the less-emphasized supply side – call it rent selling – is the real instigator. Only states have the power to create zero-sum political favors, disfavors, and cronies. Cronyism isn’t a brand of capitalism, but a symptom of hybrid systems; interventionist states that heavily influence socioeconomic results actively invite lobbying by those who are most affected and can most afford it (the rich and powerful). But the root problem of favoritism isn’t one of demanders who bribe, but of suppliers who extort.

Cronyism is measurable today in well-devised metrics of political corruption. We also have good metrics on economic freedom, capturing degrees of intervention (and the extent of hybridness). The pattern is clear: Cronyism increases as a nation becomes less free economically, and with diminishing freedom a system moves away from capitalism (towards fascism or socialism).

Political favors and disfavors can be codified in regulation, taxation, and/or subsidization. Rent selling is akin to the long-acknowledged phenomenon of influence peddling. Political influence can only be peddled (sold) if it first exists. The creators and supply-siders of political favors and disfavors include politicians, policymakers, and bureaucrats. Massive new sums of money are spent on politics, but that’s because so much politics is injected into money-making.

Political favors and disfavors count on an erosion and rejection of equality under the law. This principle, which for three centuries has preserved and protected legitimate rights, the inviolability of property rights, and the sanctity of free contracting, is crucial to the maintenance of a free, capitalist system. By now there should be little doubt that the rule of law in America is being eroded. Crises and emergencies, both real and contrived, are used as a pretext to rule arbitrarily, to mandate, decree, and dictate. This happened after the attacks of 9/11, after the financial crisis of 2008, and after the COVID-19 pandemic in 2020. Arbitrary, authoritarian political rule is also a bipartisan trend. Both Trump and Biden, for example, have invoked the Defense Production Act (1950), which gives Washington the power to seize and control whole industries, especially during war.

Whereas equality under the law requires equal treatment of all, opposite, unjust systems institutionalize differential, discriminatory treatment (whether legal or fiscal). That’s what is needed to bestow favors and impose disfavors—unequal treatment under law. Moreover, the more influential, powerful, and redistributive a government becomes, the less free its economy becomes, and the more likely its political corruption and economic stagnation tend to spread.

Figure One summarizes data from 181 countries around the world. I gather measures of their degree of economic freedom, political corruption, and per capita income. The relationships are clear. The freer a nation’s economy, the less politically corrupt it is, and the richer it is. In contrast, the less economically free a nation, the more politically corrupt it is and the poorer it is.

Correlation is not causation, of course; the data pattern in Figure One doesn’t self-evidently prove whether political corruption (granting favors, imposing disfavors) is predominantly a supply-side or demand-side phenomenon, whether it originates and persists due to markets or to politics. But it’s difficult to imagine why anyone in the profit-seeking private sector would waste their time, energy, or money seeking influence on the public sector, if it has little or no influence to offer in the first place. To “offer influence” is to peddle it, provide it, and supply it.

In my judgment, the causal sequences are thus: On the upside, more economic freedom (due to pro-capitalist ideology and hands-off public policy) leads to clean governance and more prosperity; on the downside, less economic freedom (due to anti-capitalist ideology and interventionist public policy) leads to political corruption, then less prosperity.

For government policy to erode economic freedom, it must regulate, trust-bust, tax, spend, and subsidize. The more it does so, the more it attracts the attention, lobbying, and funding of those most affected (for good or ill). Political actors know this, but aren’t so eager to advertise it loudly. They prefer to pose as selfless public servants, unavoidably victimized by rich and powerful “fat cats,” by nefarious “special interests.” In fact, many low-paid political actors envy the material success and wealth of real (private sector) producers, and aim to legally loot them.

Figure Two presents the same data but in a two-dimension exhibit using 48 of the 181 countries. As in Figure One, the freedom and corruption measures are positively related (upward sloping). Notice also that the richer nations (designated by green dots) reside in the northeast quadrant of the exhibit, while the poorer nations (designated by red dots) reside in the southwest quadrant.

Richer nations are richer in large part because they are freer economically, but they are also less corrupt politically. Their property-protecting, pro-capitalist public policies prioritize the multiplication of wealth, not its division or diversion. Poorer nations are poorer largely because they are less-free economically, and hence also more corrupt politically. Their property-violating, anti-capitalist policies divide and divert wealth instead of multiplying it.

We can also assess the metrics globally by geographic region. Figure Three illustrates how the seven biggest English-speaking nations enjoy the most economic freedom, less political corruption, and thus greater per-capita income. Next best are the nations of Europe, followed by those in the Asia-Pacific region.

The worst cases occur in the nations of Sub-Saharan Africa, known for their decades of cruel, anti-capitalist policies. They’ve prided themselves on being free (since the 1960s-1970s) of the colonization of European powers (mainly Britain and France), but most have only freed themselves from the rule of law, economic freedom, clean governance, prosperity, and humanity. Nations in the Middle East and North Africa are least free, and only a bit less corrupt than those in lower Africa. But to the extent they are richer than the three other regions, it’s mainly because sheiks seized the oil fields built by British, French, and American oil giants. They’ve since benefited from the Fed’s debasement of the dollar (thus appreciation in the value of their oil exports).

Those today who demand an increasingly interventionist-authoritarian role for the state are often the same ones who decry “crony capitalism.” But the phrase is worse than a blatant contradiction. It’s a ruse deployed to blame capitalism for the results of anti-capitalist policies. The real cronies are those who demand and supply interventionism. Despite their claims, they can’t get money out of politics, or reduce corruption, because they’re so eager to inject politics into money-making.

This article, Rent Selling Countries are More Corrupt and Less Wealthy, was originally published by the American Institute for Economic Research and appears here with permission. Please support their efforts.