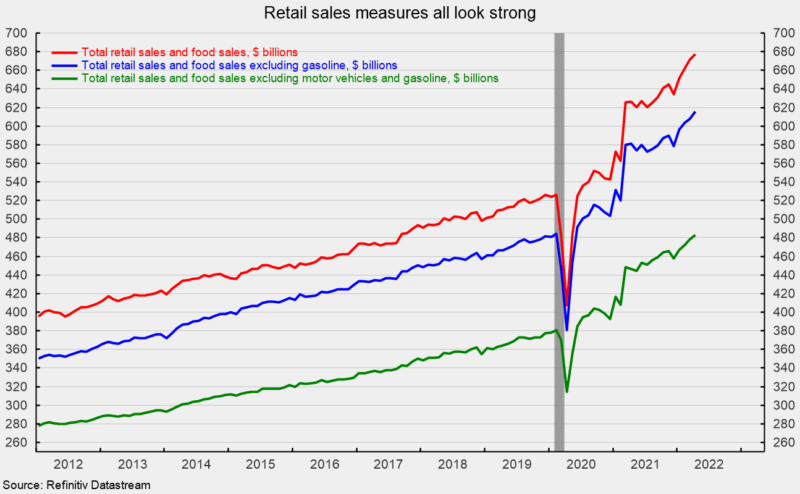 Furthermore, these data are not adjusted for price changes. In real terms, total retail sales were up 0.6 percent (adjusted using the CPI) following a 0.2 percent increase in March and are also now showing stronger upward trends (see second chart).

Core retail sales, which exclude motor vehicle dealers and gasoline retailers, rose 1.0 percent for the month, following a 1.2 percent gain in March (see first chart). The gains leave that measure with an 8.2 percent gain from a year ago. After adjusting for price changes, real core retail sales rose 0.5 percent in April, the fourth monthly gain in a row, and are up 2.0 percent from a year ago (see second chart).

Gasoline spending led the decliners, down 2.7 percent for the month. However, the average price for a gallon of gasoline was $4.37, down 0.7 percent from $4.40 in March, suggesting price changes accounted for some of the move. Sporting goods, hobby, musical instrument, and book stores sales were off 0.5 percent, and food and beverage store sales were down 0.2 percent (see third chart).

Overall, retail sales rose for the month and revised data show a stronger trend in recent months. However, rising prices are still providing some boost to the numbers. Furthermore, persistent elevated rates of price increase are starting to have a negative effect on consumer attitudes.

Continuing labor shortages, along with materials shortages and logistical issues, are likely to continue to slow the recovery in production across the economy and sustain upward pressure on prices. In addition, the Russian invasion of Ukraine, renewed lockdowns in China, and a new Fed tightening cycle remain threats to economic expansion. The outlook has become highly uncertain.

This article, Retail Sales Post Strong Gains in April, was originally published by the American Institute for Economic Research and appears here with permission. Please support their efforts.