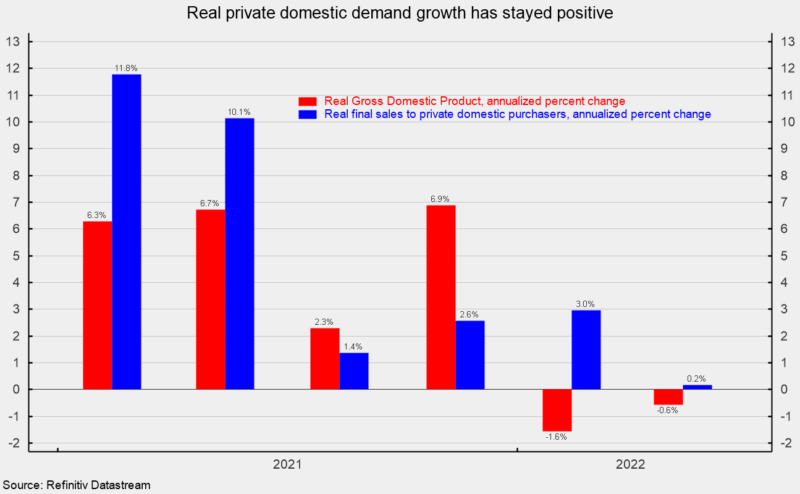 Business fixed investment was unchanged in the second quarter of 2022 after a 10.0 jump in the first quarter. Intellectual-property investment rose at a 10.0 percent pace, adding 0.51 points to growth while business equipment investment fell at a -2.7 percent pace, subtracting 0.15 percentage points, and spending on business structures fell at a 13.2 percent rate, the fifth decline in a row, and subtracting 0.36 percentage points from final growth.

Businesses added to inventory at an $83.9 billion annual rate (in real terms) in the second quarter versus accumulation at a $188.5 billion rate in the second quarter. The slower accumulation reduced second-quarter growth by a very sizable 1.83 percentage points (see third chart). The inventory accumulation helped boost the real nonfarm inventory to real final sales of goods and structures ratio to 4.06 from 4.0 in the first quarter; the ratio hit a low of 3.75 in the second quarter of 2021. The latest result is still below the 4.3 average for the 16 years through 2019 but suggests further progress towards a more favorable supply/demand balance (see fourth chart).

Government spending fell at a 1.8 percent annualized rate in the second quarter compared to a 2.9 percent pace of decline in the first quarter, subtracting 0.32 percentage points from growth.

Consumer price measures showed another rise in the second quarter. The personal-consumption price index rose at a 7.1 percent annualized rate, matching the first quarter. From a year ago, the index is up 6.5 percent. However, excluding the volatile food and energy categories, the core PCE (personal consumption expenditures) index rose at a 4.4 percent pace versus a 5.2 percent increase in the first quarter and is the slowest pace of rise since the first quarter of 2021 (see fifth chart). From a year ago, the core PCE index is up 4.8 percent.

Lingering materials shortages, labor constraints, and logistical problems are sustaining upward pressure on prices, though progress is being made on improving the supply-demand balance. Upward price pressures have resulted in an intensifying Fed policy tightening cycle, raising the risk of a policy mistake. In addition, fallout from the Russian invasion of Ukraine continues to impact global supply chains. The economic outlook remains highly uncertain. Caution is warranted.