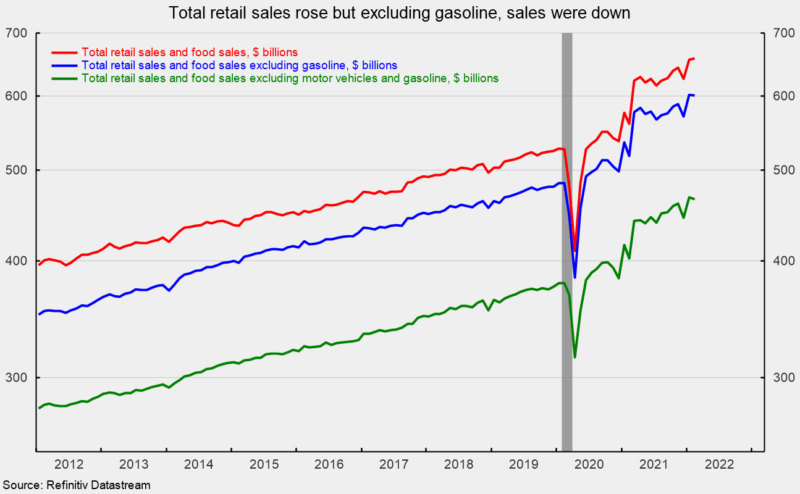 Core retail sales, which exclude motor vehicle dealers and gasoline retailers, fell 0.4 percent for the month, following a 5.2 percent jump in January (see first chart). The decline leaves that measure with a 15.8 percent gain from a year ago.

Categories were mixed for the month with seven up and six down in February. The gains were led by a 5.3 percent rise in gasoline spending. However, the average price for a gallon of gasoline was $3.68, up 5.0 percent from $3.50 in January.  Food services and drinking sales followed with a 2.5 percent increase while miscellaneous store sales rose 1.9 percent and sporting goods, hobby, and bookstore sales gained 1.7 percent.

Overall, total retail sales rose for the month, lifted by rising prices, especially for gasoline. However, in real terms, total retail sales fell. Furthermore, nominal core retail sales also posted a decline in February. Continuing labor shortages, along with materials shortages and logistical issues, are likely to continue to slow the recovery in production across the economy and sustain upward pressure on prices. In addition, geopolitical and global economic turmoil as a result of the Russian invasion of Ukraine has had a dramatic impact on capital and commodity markets, launching a new wave of disruptions to businesses. Additionally, an impending new Fed tightening cycle will further weigh on economic activity. The outlook has become highly uncertain.

This article, Rising Prices Boost Retail Sales in February, was originally published by the American Institute for Economic Research and appears here with permission. Please support their efforts.