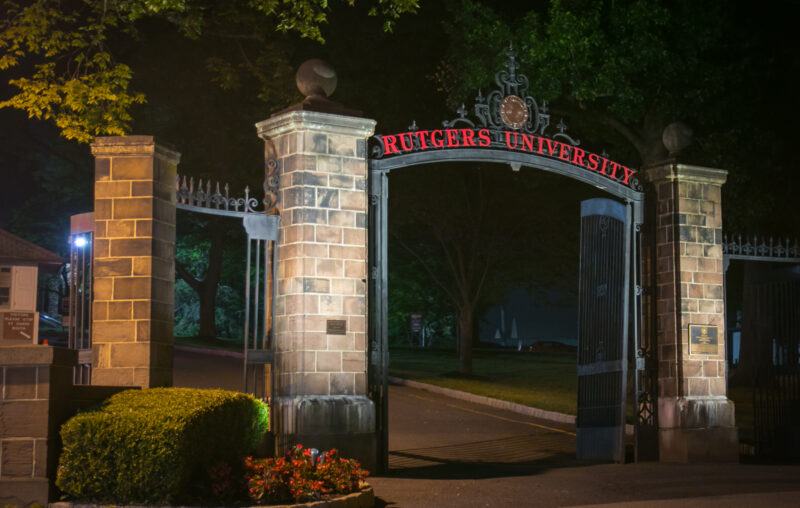 Rutgers University Graduate Business School committed “gross fraud” through a bogus employment scheme designed to improve its ratings, according to two recent lawsuits. The lawsuits have triggered a debate over the value and price of higher education.

The federal lawsuits, one a class action and the other a whistleblower litigation, claim the New Jersey business school concocted the hoax to obtain top ratings with publications such as U.S. News & World Report.

According to the complaints, the school set up a phony employment agency and faked jobs for graduates. The university used $400,000 of endowment money to provide “kickbacks” to the employment agency, the lawsuits said, then boasted on its website, “86.10 percent of graduates of the full-time program are employed.”

The lawsuits tell a different story.

“In 2018, the very first year of the scheme, Rutgers was suddenly propelled to, among other things, the No. 1 business school in the Northeast region of the United States.

Rutgers wouldn’t answer questions from InsideSources, but issued a statement.

“We will say without equivocation, however, that we take seriously our obligation to accurately report data and other information to ranking and reporting agencies. The Rutgers Business School strictly follows the MBA Career Services & Employer Alliance guidelines in submitting MBA statistics and similarly follows the appropriate guidelines in submitting undergraduate statistics,” the university said.

Matthew A. Luber, a partner with the firm of McOmber, McOmber & Luber in Marlton, New Jersey, says Rutgers schemed to burnish its image. “They used a temp agency to manufacture jobs for the specific purpose of getting a higher rating,” Luber said.

Luber says the second lawsuit against Rutgers was filed on behalf of Deidre White, a Rutgers human resources manager who objected to the scheme and was penalized.

“The retaliation was so protracted and so severe that Plaintiff’s health physically deteriorated,” the lawsuit said. “But there is an even more sinister reason for Defendants’ conduct.”

Luber contends numerous institutions justify high tuition with “deceptive data regarding post-graduation employment opportunities, hiring rates and salaries. And, he believes, fraudulent ratings are widespread: “This is not the type of problem that is unique to Rutgers. We think this is systemic.”

He’s not alone. Advocates for alternative forms of education like apprentice programs, career colleges and tech school say there’s a built-in bias to promote four-year colleges and state schools rather than simply looking at the data.

“We just want to be treated fairly,” said Jason Altmire, president and CEO of Arlington, Virginia-based Career Education Colleges and Universities, which represents for-profit career colleges. He notes that their completion rates — the percentage of students who get their degrees or certifications — is higher than the average for community colleges. And yet the Biden administration is considering rules to limit Pell grant funding available to career college students.

Critics of the “everyone should go to college” approach championed by President Barack Obama point to the “Varsity Blues” scandal in which at least 53 people were charged in a bribery scheme to get unqualified students fraudulently admitted to four-year colleges.

All of which is part of a larger conversation about pushing more high school graduates to attend traditional four-year institutions. Some guidance counselors now question if a teenager or family should go deep into debt to pay for higher education.

The total amount of outstanding student loans was $1.58 trillion in 2021, increasing approximately $14 billion between the second quarter and third quarter, according to the New York Federal Reserve. About one-third of all American students now incur college debt. The average student loan debt reached a record high of $38,792 in 2020.

A new survey finds many have buyer’s remorse.

“Sixty-three percent of people regret taking out a student loan,” according to a new survey from Givling, a group that helps those struggling with student debt.

The survey of 1,600 student loan borrowers across the United States revealed about half have been paying student loans for 10 years. About a quarter carry about $70,000 in student loan debt. Twenty-seven percent of respondents said that the return on investment doesn’t justify the debt.

“The student debt crisis has surged 144 percent over the past decade, forcing 45 million Americans to shoulder more than $1.5 trillion in loans,” says Laurie Farros, Givling president.

“I would prefer that my clients not take on any student loan or parent loan debt for undergraduate studies,” said Melissa B. Brennan, an adviser in Plano, Texas. “There are too many ways to make a bachelor’s degree more affordable, and families need to keep their eyes on the prize: financially self-sufficient children.”

This article, Rutgers, Lawsuits, and Buyer’s Remorse, was originally published by the American Institute for Economic Research and appears here with permission. Please support their efforts.