Saving America From the Counterrevolution 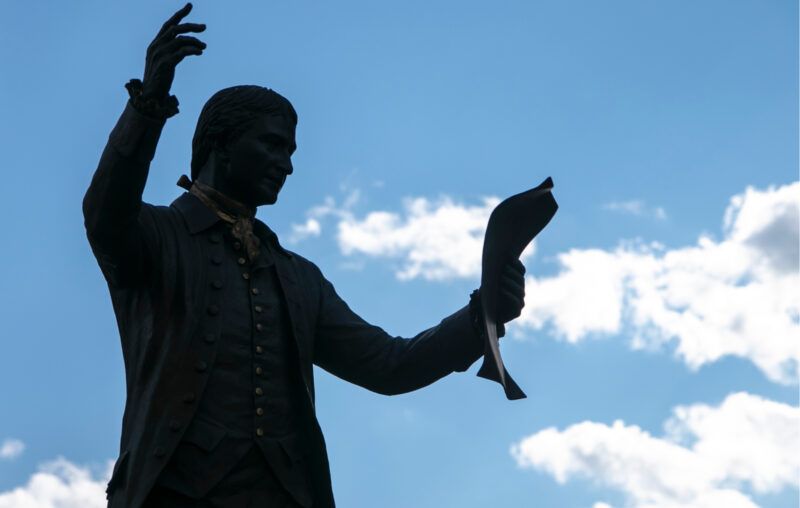 When barbarians sacked the city of Rome, it was because the Roman Empire had already sacked itself. Of course, the Romans may have been outmaneuvered and outgunned by their enemies, but their civilization had already been subdued long before the first building in Rome burned. Rome’s productive culture had decayed, complacency and decadence plagued its society, its military was bloated and overstretched in pointless conflicts, corruption was widespread amongst its government, and all while its rivals continued to grow in power.

The founder of the American Institute for Economic Research (AIER), Colonel Edward C. Harwood, wrote a little-known manifesto titled The Counterrevolution, which recounts this lesson not just for America but for the entirety of Western Civilization and its allies. The book may have been written in 1951, but it is just as relevant today, if not more so given where we are. During Harwood’s time, he saw a world greatly coming undone. Communism and Fascism were on the rise in Europe. Here at home, he observed a much milder but still highly troubling embrace of authoritarianism and reckless economics. It was obvious after reading Harwood’s book that he founded AIER to be the vanguard of not only sound economics and good government but ultimately a free and open society.

One does not need to work at or even have commitments to AIER to get value from this book. If you treasure prosperity, freedom, and dignity not just for Western civilization but for all of humanity, this book is part of your heritage.

The Great Revolution and the Counterrevolution

The term counterrevolutionary describes people who wish to thwart or overturn a revolution. Harwood terms the revolution he supports as the “great revolution,” which refers to the path of Western Civilization from a pack of feudal states living in poverty and conflict, to the prosperous powerhouse of wealth and culture it is today. In particular, he cites freedom and individual rights as two of the key components of the great revolution. Prior to the widespread adoption of enlightenment ideas regarding liberty and dignity, Harwood noted,

“Only the more fortunate who had been granted dominion over the earth and the fruits thereof, seemingly by an inscrutable providence, could live much differently than did the beast of burden in that almost-forgotten age.”

Indeed for much of human history, the authority and rule of the few over the many was the norm. Stagnation, conflict, and misery were the standard for thousands of years, each generation living just as poorly if not worse than the next.

The counterrevolution is the rebellion against the ideals of a free and open society that has made Western Civilization and its ideological allies prosperous. It is fundamentally a lack of confidence if not outright disdain for the freedoms and rights we enjoy today. The counterrevolution does not subscribe to any one ideology, but you know it when you see it. In Harwood’s day, he notes,

As we have seen, Communism rejected the ideas of the great revolution and returned countless people to the days of crippling poverty and suffering. That should serve as a proof of concept, as Harwood was keen in his assessment of the threats to society posed by the counterrevolution. When Communism was defeated, the world did in fact undergo an explosion of increasing prosperity and peace.

Today we can certainly see new counterrevolutionaries and metaphorical armies at the gates. The rise of China is of course the most obvious. More formidable than Communist Russia, but just as adversarial, if not more, to the ideals of freedom and prosperity. Here in the United States, we see the internal forces of the counterrevolution he warned of back in 1951. Harwood wrote,

“Because they believed that the Great Revolution had brought to men more evil than good, the Socialist urged a retreat from the troubles of partial freedom in the arms of an all-powerful state…The Socialist state was to be a beneficent despot rather than a capricious tyrant…However, the Socialists overlooked the principles of economics, those patterns of economic behavior that seem like the “natural laws” of physics.”

The socialists are very much still around today and their influence is growing. There is also the far-right and the new-right that seem to have abandoned the traditional Conservative commitment to the Constitution as well as free markets. On the left, you have the aforementioned socialists but also the emergence of intersectionality and critical race theory that combine economic ignorance with an utter disregard for individual dignity. Harwood explains that counterrevolutionary ideologies are based on legitimate complaints about society but have terrible solutions.

The best way to deal with them is to eliminate the problems that give them strength, whether it be providing economic opportunities for the marginalized or ensuring communities that were left behind can modernize. This, of course, requires more economic and civil freedom, not less. Harwood would recommend beating back the regulatory state, restoring the constitutional order, continuing to foster inclusive values pertaining to individuality, and reinvigorating our faith in private enterprise. They helped Western Civilization get this far; embracing these ideas again will certainly take it farther.

Harwood correctly notes that the danger of the counterrevolution comes from abroad and at home, much like how Rome fell not just from invaders but from internal decay. His views on foreign policy, although primarily applied to the Cold War, are eerily relevant today. He wrote about the dangers of a reckless foreign policy that was overly expansive and interventionist. Not only does this stretch our forces thin and waste resources, but the upkeep of what is essentially an empire has negative ramifications domestically. Harwood was not a total noninterventionist and understood that war was necessary, but only when it served clear goals such as stopping Communism. He would likely not approve of today’s status quo of attempting to find a problem in every corner of the world.

When writing about the Soviet Union, he noted that many Americans had doubts about the power of free markets and civil liberties. We see that today as intellectuals and politicians cast a disdainful eye on traditional American values and hint at their admiration for the state planning inherent to the Chinese model. However, as Harwood explains about the Soviet Union and as any detailed analysis of China shows, state planning on paper and in practice cannot even begin to compete with a market economy. Harwood wrote,

“Russian industrial capacity has not been, is not at present, and in the near future will not be comparable to the industrial power of the United States.”

He then makes an even more important point that the only way that Russian output will surpass the United States is if we moved in the direction of state planning and Socialism. The same is exactly true when it comes to the Chinese, especially in terms of per capita output.

Harwood also stresses the necessity of setting a good global example of freedom. This is intuitive not only because doing so will restore faith in the values of Western Civilization abroad, but also because we cannot win if we do not truly believe in our own way of life. Harwood has a particularly eloquent line about the necessity to assess our own domestic policies when he wrote,

“Unless something like this is done, we greatly fear that the statue in New York Harbor of the goddess of liberty enlightening the world will no longer be an appropriate symbol of United States policy at home and abroad…We shall gain nothing but a little temporary security and shall lose all that we treasure highly as the United States declines and falls with the rest of Western Civilization, a victim of the counterrevolution.”

Prudency and purpose in our policymaking must replace the current regime of complacency and decadence if we are ever going to survive.

Defenders of the great revolution of enlightenment values and modernity have our work cut out for us. Harwood’s book is just as relevant today as it was in 1951 and at less than 100 pages, it is a manifesto for those who are up to the task of standing watch over the well-being of our society. Those who wish to dismantle the institutions of liberty that have made the West and its affiliates the richest and most advanced in human history pose a real threat. Abroad they must be held back with bayonets and sound foreign policy. Domestically they must be defeated in the realm of ideas and thoroughly discredited by addressing our shortcomings that give them credibility. Ultimately, this all requires restoring confidence in our civilization. That is because long before any rival power declares victory over the West, the West will have already given up on itself.

This article, Saving America From the Counterrevolution, was originally published by the American Institute for Economic Research and appears here with permission. Please support their efforts.