Services-Sector Growth May Have Slowed Again in January 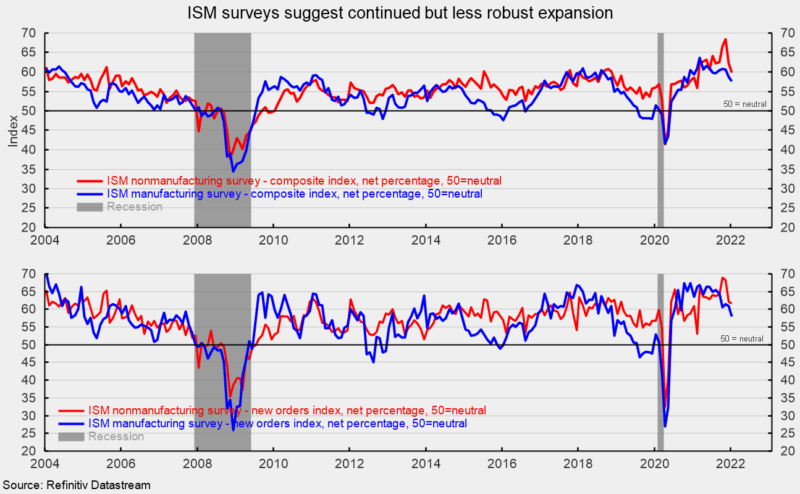 The Institute for Supply Management’s composite services index fell to 59.9 percent in January, losing 2.4 points from 62.3 percent in the prior month. The index remains solidly above neutral and suggests the 20th consecutive month of expansion for the services sector and the broader economy (see top of first chart). However, the declines over the last two months suggest that growth may have been somewhat less robust. The softer expansion is consistent with the ISM manufacturing-sector survey results (see top of first chart).

Among the key components of the services index, the services new-orders index fell to 61.7 percent from 62.1 percent in December, a drop of 0.4 percentage points (see bottom of first chart). New orders have been above 50 percent for 20 months and above 60 for the past 11 months – a strong performance overall. For January, 10 industries reported expansion in new orders while four reported drops. Manufacturing new orders also ticked down in January and have weakened noticeably since March 2021 (see bottom of first chart).

The nonmanufacturing new-export-orders index, a separate index that measures only orders for export, fell below the neutral 50 level in January, coming in at 45.9 versus 61.5 percent in December. Four industries reported growth in export orders against five reporting declines.

Backlogs of orders in the services sector likely grew again in January though the pace may have slowed as the index decreased to 57.4 percent from 62.3 percent. January was the third decline in a row. Eleven industries reported higher backlogs in January while six reported a decrease.

The business-activity index (comparable to the production index in the ISM manufacturing report) decreased to 59.9 percent in January, down sharply from 68.3 percent in December and 72.5 in November (see top of second chart). This measure has been above 50 percent for 20 consecutive months. For January, eight industries in the services survey reported expansion versus seven reporting contraction. For the manufacturing sector, the production index ticked down for a second consecutive month in January but remains at a healthy level (see top of second chart).

The services employment index remained above the neutral 50 percent level, coming in at 52.3 percent in January, but is down from 54.7 percent in December and 57.0 in November, suggesting slower expansion in payrolls over the last two months (see bottom of second chart). Five industries reported growth in employment while eight reported a reduction.

The manufacturing employment index posted a 0.6-point increase to 54.5, a solid reading by historical comparison. Continued gains in these indexes will be critical in easing production bottlenecks.

Supplier deliveries, a measure of delivery times for suppliers to nonmanufacturers, came in at 65.7 percent, up from 63.9 percent in the prior month (see top of third chart). It suggests suppliers are falling further behind in delivering supplies to services business and the slippage accelerated slightly from the prior month. Seventeen industries reported slower deliveries in January while just one reported faster deliveries.

There was a slight decline in the manufacturing supplier deliveries index, the third decline in a row, falling 0.3 points to 64.6 percent (see top of third chart). However, both remain at historically high levels.

The January report from the Institute of Supply Management suggests that the services sector and the broader economy expanded for the 20th consecutive month in January. Respondents to the survey continue to highlight robust levels of activity and strong demand but also continued price pressures, materials shortages, logistics, and transportation issues, and challenges hiring and retaining workers. Omicron was also mentioned repeatedly among respondents as workers called in sick or stayed out of work to care for sick family members. As the latest wave crests, some improvement in production is expected, but the overall shortage of labor is likely to be a lingering problem.

This article, Services-Sector Growth May Have Slowed Again in January, was originally published by the American Institute for Economic Research and appears here with permission. Please support their efforts.