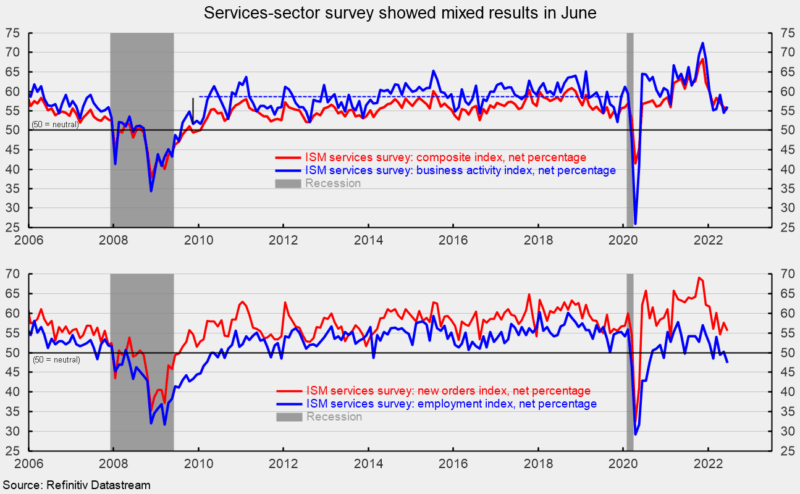 The Institute for Supply Management’s composite services index decreased to 55.3 percent in June, falling 0.6 points from 55.9 percent in the prior month. The index remains above neutral and suggests the 25th consecutive month of expansion for the services sector. However, the June result is also the slowest since May 2020 suggesting the pace may have slowed somewhat (see top of first chart).

Among the key components of the services composite index, the business activity index gained 1.6 points to 56.1 (see top of first chart). That is the 25th month above 50. However, the three-month average came in at 56.6, below the ten-year average of 58.7 from 2010 through 2019 during the last economic expansion.

The services new-orders index fell to 55.6 percent from 57.6 percent in May, a drop of 2.0 percentage points. June was the third lowest result of the current expansion and well below the 69.0 reading from October 2021 (see bottom of first chart). Still, the new orders index has been above 50 percent for 25 consecutive months.

The nonmanufacturing new-export-orders index, a separate index that measures only orders for export, also weakened in June, coming in at 57.5 versus 50.9 percent in May. Six industries reported growth in export orders against four reporting declines. However, for all respondents, only about 21 percent said they perform and track separate activity outside the US.

Backlogs of orders in the services sector likely grew again in June as the index increased to 60.5 percent from 52.0 percent. June was the 18th month in a row with rising backlogs. Ten industries reported higher backlogs in June, while four reported decreases.

The services employment index declined in June, coming in at 47.4 percent, down from 50.2 percent in May. That is the third time in the last five months that the employment index fell below neutral (see bottom of first chart). The weak reading reflects lack of supply rather than lack of demand. Seven industries reported growth in employment while five reported a reduction. Respondents suggest qualified labor is in short supply and competition remains intense.

Supplier deliveries, a measure of delivery times for suppliers to nonmanufacturers, came in at 61.9 percent, up from 61.3 percent in the prior month (see top of second chart). It suggests suppliers are falling further behind in delivering supplies to services business, and the slippage accelerated slightly from the prior month. The overall level of the index remains high by historical comparison but has moved sharply lower since back-to-back readings above 75 in October and November 2021. The manufacturing sector survey matches the recent improvement (see top of second chart). For the services sector, sixteen industries reported slower deliveries in June while none reported faster deliveries.

The nonmanufacturing prices paid index eased back to 80.1 in June, the second consecutive decline from a record-high 84.6 percent in April (see bottom of second chart). All eighteen industries reported paying higher prices for inputs in June. Price pressures have eased slightly but remain intense for both the services and manufacturing sectors (see bottom of second chart).

The latest the Institute of Supply Management report suggests that the services sector and the broader economy expanded for the 25th consecutive month in June. Respondents to the survey continue to highlight intense input price pressures, materials and labor shortages, and logistics and transportation issues, though there were also a few comments on signs of improvement in some of these areas. Respondents also noted concern over rising interest rates and signs of retrenchment by consumers.

This article, Services-Sector Survey Suggests Continued Expansion in June, was originally published by the American Institute for Economic Research and appears here with permission. Please support their efforts.

TaxWatch: Yes, the IRS is hiring criminal investigators empowered to use deadly force — but here’s some important context

59% Of Americans Are Concerned About Biden’s Mental Health, Poll Finds