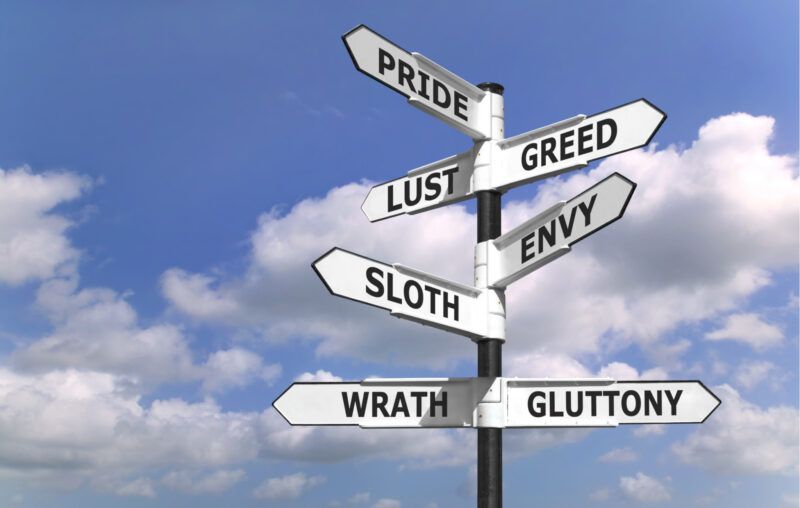 “But it is not the popular movement, but the travelling of the minds of men who sit in the seat of Adam Smith that is really serious and worthy of attention.” ~ Lord Acton, Letter of Lord Acton to Mary Gladstone

It is perhaps unusual to start a book review with a note of thanks, but in this case, I would like to begin by thanking James Otteson, John T. Ryan Jr. Professor of Business Ethics at Notre Dame University, for authoring such a remarkable, and relevant, book, which he titled Seven Deadly Economic Sins: Obstacles to Prosperity and Happiness Every Citizen Should Know.

Seven Deadly Economic Sins is written in a way that makes it both accessible to the layman and appreciable to the academic. It is a highly versatile text; it can be gifted to an inquisitive friend, serve as a complementary text to an Econ 101 course, or be used in a political economy reading group.

Otteson lays out his thesis like this: in the Christian tradition, there are said to be seven deadly sins, which are agreed upon as harmful to the human condition. In list form, these are pride, greed, lust, envy, gluttony, wrath, and sloth. According to Otteson, “each is a natural human weakness that impedes happiness,” and something we must continuously battle. We may think we’ve conquered one, only to find another rearing its ugly head.

Similarly, are there also seven deadly economic sins? Otteson claims there are, and throughout his book he explains why these “seven central economic fallacies” exist, and why they are harmful to the human condition, ultimately leading to “waste, loss, and foregone prosperity.”

As Otteson describes it,

“Some of the principles of economics would, if more widely understood and appreciated, help make not only better decisions in our own individual lives but also make better social and public decisions about laws, regulations, and polices. If only those of us who are not trained economists could find a ready way to learn some core economic fundamentals without having to go back to school and major in economics.”

This is where Otteson’s book shines, elucidating seven deadly economic fallacies that dominate our public discourse even though doing away with them would drive our understanding of the world in a positive direction.

Otteson acknowledges economists disagree on much with respect to policy, as evidenced by the following quote from an NBER Working Paper on the topic,

“Winston Churchill is supposed to have complained that whenever he asked Britain’s three leading economists for advice about economic policy he received four different opinions–two from John Maynard Keynes. The image of economists in disarray about economic policy is firmly embedded in the popular mind, enhanced, no doubt, by the tendency of many journalists to seek out extreme opposing views on controversial issues.”

But he makes compelling claims across the seven chapters that form the meat of his book for why we ought to avoid each of the following fallacies:

In this chapter Otteson provides compelling evidence that in a market-based society based on voluntary transactions, wealth is in fact positive-sum. This is contrasted with non-market means of wealth, namely extraction, where wealth can be accurately described as zero-sum or negative-sum. If more people understood this, that in a market-based commercial society people build wealth in a way that is a “win-win” for everyone, there would undoubtedly be a stronger push for policies that allow us to operate in a way that promotes positive-sum wealth generation.

Otteson follows his critique of the wealth is zero-sum fallacy by introducing us to the concepts of opportunity costs and unintended consequences. He reminds us that we must consider trade-offs, opportunity costs, and far-reaching consequences before pursuing policies that appear to be popular or provide an immediate “good” or face-value.

He uses Bastiat’s classic “Broken Window Parable” as an example of this, illustrating the “seen” vs “unseen” costs associated with making economic decisions. In Bastiat’s essay, What is Seen and What is Unseen, a boy throws a rock through a shop window, causing the shop owner to replace the window. The window glazier gets $100 in new business for replacing the window, and the shop owner gets a new window. This seems productive. The benefit to the glazier of $100 and the benefit to the shop owner of a new window are what Bastiat calls the “seen.”

Should we then go around smashing windows because of these “seen” economic benefits? We should not; for the “unseen”, the opportunity cost in Bastiat’s essay, represents what the owner could have spent the $100 on if he did not need to replace his window.

While this seems obvious in the context of the Broken Window Parable, many policymakers do not see these “unseen” costs when, for example, they use public funds raised through taxes for various projects such as “infrastructure,” “public works,” etc. “Good” is not “good enough” when opportunity costs are ignored.

Here Otteson reminds us there is no single great mind, or panel of experts, with the relevant knowledge to plan or direct our lives.

As Otteson puts it,

“…no third party, however expert, can know what risks we should take to achieve our goals or what our proper risk tolerances should be. There is, alas, no Great Mind, which means that such decisions should properly be left to the individuals themselves, using their judgement as best they can.”

Otteson does not deny that subject matter experts exist, but as his focus is policy-oriented, he uses claims made by scientists in the 1970s to illustrate his point,

“Scientists have solid experimental and theoretical evidence to support…the following predictions: In a decade, urban dwellers will have to wear gas masks to survive air pollution… by 1985 air pollution will have reduced the amount of sunlight reaching earth by one half.”

The above example is but one of many that highlights Otteson’s contention:

“Whatever knowledge experts have about saving and investing, health and nutrition and so on does not suffice to put them in a position to know what you- or any other individual- should do, because experts do not know you, or the other individuals to whom their policies should apply. To know what any given individual should do requires detailed knowledge of her specific situation.”

One only needs to look at the following chart to see this fallacy:

Although we’ve enjoyed an explosion of progress in the past three hundred years, (see the classic “hockey stick” chart above), history shows us this is not inevitable. On the contrary, it is unusual when viewed over the whole of human history and appears extremely, and positively, correlated with the emergence of market-based societies. Per Otteson,

“Progress, improvement, and prosperity depend on people having the right attitudes, in particular moral attitudes; they depend on allowing people the scope to engage in trial and error to discover the right paths for themselves and to learn from both their successes and mistakes.”

There is in the explanation of this fallacy an explicit warning to the reader and the policymaker. A move away from moral attitudes that support market-based societal organization (for example, in favor of the Great Mind), can reverse this growth trajectory.

In popular culture economics is often thought of as amoral, or even immoral, with a reputation somewhere between a cold and calculating science and a field of study that prefers ideas such as “profits above people.” Nothing could be further from the truth; and as Otteson states, economics is “a way, in many circumstances the only way, of enabling us to show proper care and respect for people- all people.” Otteson then draws on Adam Smith to dissect how:

“The principles of economics and economic reasoning are indispensable for achieving a rational moral order, both personally and publicly. They are therefore necessary for the achievement of our highest moral purposes, and for having a chance of attaining eudaimonia.”

Equality, and by extension inequality, is a persistent and ever-pressing issue relative to the human condition. Some politicians suggest that, “inequality is the ‘defining issue of our time.’” Otteson examines these claims, and concludes that,

Otteson goes further, however, in a meaningful way, promoting the moral claim that we should not pursue equality of “resources, income or wealth,” but rather:

“We should defend equality of moral agency, for all people, out of respect for their dignity as rational and autonomous beings.”

This will not lead to an equality of “things owned” for all people, which when enforced can be seen as a combination of the Wealth as Zero Sum and Great Mind fallacies put in practice. Instead, holding respect for people’s choices and equal moral agency allows us all to benefit from the prosperity that arises from individual choice and economic freedom.

In the final chapter of the body of the book, Otteson reminds the reader that markets alone are not the solution to all problems. For example, he highlights the challenges of running a family like a market; which he demonstrates with humorous quotes such as, “How much money would it take for you to let me sit in the recliner to watch the movie?” and “Little Mary wants to have only ice cream for dinner every night, so we have to respect her choices.”

While recognizing markets are not perfect, Otteson shows how collective action problems and exploitation issues, which arise naturally from the human condition, can still best be alleviated through market-based solutions. As Otteson writes,

“The increasing prosperity to which market-based commercial societies lead, and the coordination of our available resources to our needs that (real) prices enable, generate more resources with which to face these challenges according to their order of importance to us. That puts us in a better position to address, if not always solve, them.”

As society moves towards a great reopening following restrictive Covid pandemic policies, James Otteson’s book is timely. He provides us with much needed common sense on basic economic principles that, if widely understood, can provide society with significant benefits.

Seven Deadly Economic Sins is a must read for the general public, policymakers, and students of economics who wish to gain an understanding, at a philosophical level, of the economic fallacies that continue to circulate in common thought and among certain policymakers, along with a convincing rebuttal of each, placed in the context of why getting it right matters for human progress.

This article, Seven Deadly Economic Sins: A Review, was originally published by the American Institute for Economic Research and appears here with permission. Please support their efforts.