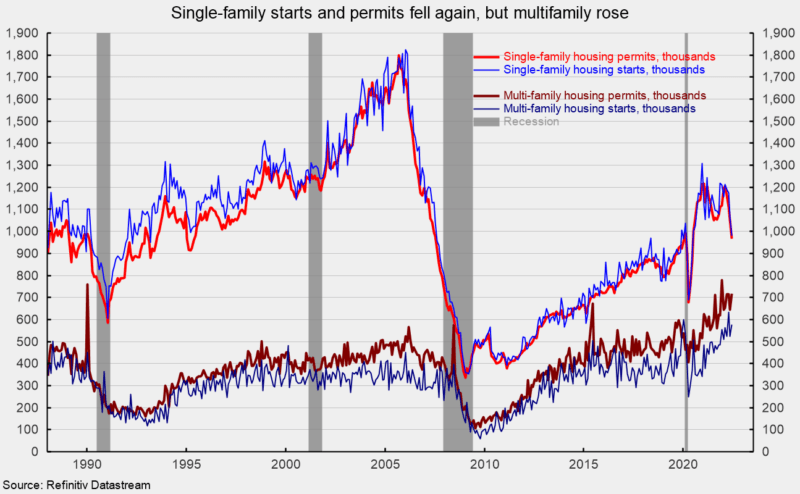 Meanwhile, the National Association of Home Builders’ Housing Market Index, a measure of homebuilder sentiment, fell again in July, coming in at 55 versus 67 in June. That is the seventh consecutive drop and the second-largest monthly decline in the index’s history, putting the result at the lowest reading since May 2020. The index is down sharply from recent highs of 84 in December 2021 and 90 in November 2020 (see second chart).

According to the report, “Builder confidence plunged in July as high inflation and increased interest rates stalled the housing market by dramatically slowing sales and buyer traffic.”  The report adds, “In another sign of a softening market, 13% of builders in the HMI survey reported reducing home prices in the past month to bolster sales and/or limit cancellations.”

Input costs are still a concern for builders though lumber and copper prices have declined from recent highs. Lumber recently traded around $650 per 1,000 board feet in mid-July, down from peaks around $1,700 in May 2021 and $1,500 in early March 2022. Copper prices were down to $7,400 per metric ton (see third chart).

Mortgage rates have eased back recently, with the rate on a 30-year fixed rate mortgage coming in at 5.50 percent in mid-July versus 5.80 percent in late June. However, rates are still about double the lows in early 2021 (see fourth chart).

While the implementation of permanent remote working arrangements for some employees may have been providing continued support for housing demand, record-high home prices combined with the surge in mortgage rates and falling consumer attitudes are working to weaken demand. Pressure on housing demand combined with elevated input costs is sending homebuilder sentiment plunging. The outlook for housing is deteriorating rapidly.

This article, Single-Family Home Construction Retreat Continued in June, was originally published by the American Institute for Economic Research and appears here with permission. Please support their efforts.