Slower Expansion in the Services-Sector in October 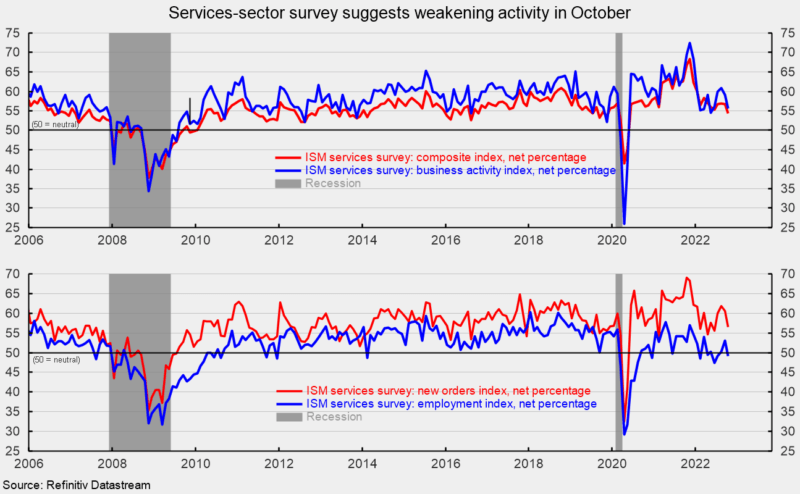 The Institute for Supply Management’s composite services index decreased to 54.4 percent in October, falling 2.3 points from 56.7 percent in the prior month. The index remains above the neutral 50 threshold and suggests the 29th consecutive month of expansion for the services sector, but at a somewhat slower pace (see top of first chart). The October results are the lowest since May 2020 and 2.4 points below the ten-year average ending December 2019 of 56.8.

Among the key components of the services composite index, the business activity index fell 3.4 points to 55.7 (see top of first chart). That is the 29th month above 50 but 3.6 percentage points below the ten-year average of 59.3 percent. Fifteen industries reported increased activity, while two reported slower activity.

The services employment index fell in October, coming in at 49.1 percent, down from 53.0 percent in September. That is the fifth time in the last nine months that the employment index was below neutral, with an average of 50.1 percent over that period (see bottom of first chart). The October result is also 4.5 points below the ten-year average (2010-2019) of 53.6 percent.

Eleven industries reported employment growth, while six reported a reduction. The report notes that respondents suggest, “There are still challenges in hiring qualified workers, and due to uncertainty regarding economic conditions, some companies are holding off on backfilling open positions.”

The services new-orders index fell to 56.5 percent from 60.6 percent in September, decreasing by 4.1 percentage points (see bottom of first chart). The new orders index has been above 50 percent for 29 consecutive months but is 2.2 points above the ten-year average of 58.7 percent.

The nonmanufacturing new-export-orders index, a separate index that measures only orders for export, plunged in October, coming in at 47.7 versus 65.1 percent in September, a 17.4-point decline. Eight industries reported growth in export orders, with four reporting declines and six reporting no change. However, of all respondents, only about 23 percent said they perform and track separate activity outside the US.

Backlogs of orders in the services sector likely grew again in October though the pace likely decelerated as the index decreased to 52.2 percent from 52.5 percent. October was the 22nd month in a row with rising backlogs. Eight industries reported higher backlogs in October, while four reported decreases.

Supplier deliveries, a measure of delivery times for suppliers to nonmanufacturers, came in at 56.2 percent, up from 53.9 percent in the prior month (see top of second chart). It suggests suppliers are falling further behind in delivering supplies to the services business, and the slippage has accelerated from the prior month. After moving sharply lower since back-to-back readings above 75 in October and November 2021 and hitting the lowest level since February 2020 last month, the index posted a gain in the latest month. The result for the services sector diverged sharply from the manufacturing sector in October (see top of second chart). For the services sector, nine industries reported slower deliveries in October while two reported faster deliveries.

The nonmanufacturing prices paid index rose to 70.7 percent in October following five consecutive declines from a record-high 84.6 percent in April (see bottom of second chart). Seventeen industries reported paying higher prices for inputs in October. Price pressures have eased somewhat for the services sector, but the October result diverges from the October manufacturing sector result which has seen a decline in price pressures (see bottom of second chart).

The latest Institute of Supply Management report suggests that the services sector and the broader economy expanded for the 29th consecutive month in October. The report notes, “Based on comments from Business Survey Committee respondents, growth rates and business levels have cooled.” Furthermore, “Supply chain and logistical issues persist but are not as encumbering as they were earlier in the year.”

This article, Slower Expansion in the Services-Sector in October, was originally published by the American Institute for Economic Research and appears here with permission. Please support their efforts.