Something That We Have Been Waiting For Just Happened, And It Is A Really Bad Sign… 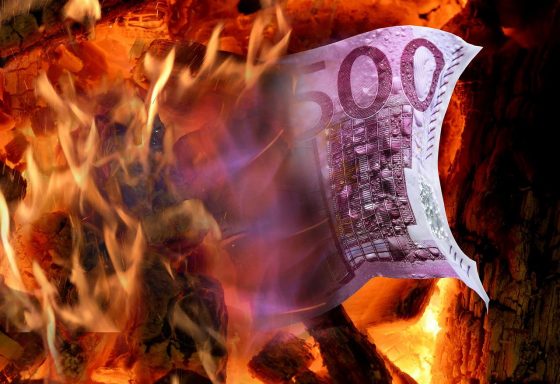 There has been a lot of talk recently about “the death of the dollar”, but the truth is that the euro is in far bigger trouble.  Inflation in the eurozone has risen to truly frightening levels, and the war in Ukraine threatens to plunge the major economies of Europe into a very deep recession.  Russia holds the key, because if Russia completely cuts off the flow of natural gas to Europe it really will cause an unprecedented economic nightmare.  Even now, energy prices in Europe have already soared to absolutely insane levels, and the Russians could make things much, much worse with a single decision.  The Europeans should have never allowed themselves to become so dependent on Russian energy, and now they find themselves stuck between a rock and a hard place.

So with everything that has been going on, it shouldn’t be any surprise that the euro has been steadily falling.

In fact, on Tuesday the euro reached parity with the dollar for the very first time since 2002…

The euro hit parity with the U.S. dollar on Tuesday for the first time in 20 years, meaning that the currencies have the same worth.

The euro fell to $0.9998 against the dollar, it’s lowest level since December 2002, as the euro zone’s energy supply crisis and economic woes continue to depress the common currency.

For years, I have been warning that the euro would eventually fall so low that it would be at parity with the dollar, and now that day has arrived.

And I have also been warning that such an event would be a really bad sign for Europe, because I always felt that hitting parity with the dollar would be an indication that a collapse of the European economy had begun.

In the short-term, everyone is going to be watching for what Russia does next.  On Monday, the Nord Stream 1 pipeline was shut down for a regularly scheduled 10 day period of maintenance…

Fears of a recession have grown in recent weeks due to rising uncertainty over the bloc’s energy supply, with Russia threatening to further reduce gas flows to Germany and the broader continent.

Russia temporarily suspended gas deliveries via the Nord Stream 1 pipeline on Monday for annual summer maintenance works. The pipeline is Europe’s single biggest piece of gas import infrastructure, carrying around 55 billion cubic meters of gas per year from Russia to Germany via the Baltic Sea.

Many analysts in the western world are greatly concerned about what will happen if the Russians don’t turn the gas back on when the 10 day maintenance period is over.

If it doesn’t get turned back on, we are being warned that Europe could actually be facing a “doomsday scenario”…

As such, DB’s Jim Reid said that July 22, the day gas is supposed to come back online, could be the most important day of the year: “while we all spend most of our market time thinking about the Fed and a recession, I suspect what happens to Russian gas in H2 is potentially an even bigger story. Of course by July 22nd parts may have be found and the supply might start to normalize. Anyone who tells you they know what is going to happen here is guessing but as minimum it should be a huge focal point for everyone in markets.”

Fast forward to today when, one day after the start of the scheduled 10-day shutdown period which has already sent flows through to NS 1 pipeline to basically zero…

… and the market is now focusing on the worst case scenario: what happens if Russia cuts off all gas on July 22, the day even Bloomberg has now dubbed Europe’s “doomsday scenario.”

So let’s watch and see what happens on July 22nd.

If the Russians decide that it is time to completely cut off the gas, European financial markets will go completely haywire.

Of course energy prices in Europe have already gone completely nuts, and authorities in Germany are preparing to use “sports arenas and exhibition halls as ‘warm up spaces’ this winter”…

Cities across Germany are planning to use sports arenas and exhibition halls as ‘warm up spaces’ this winter to help freezing citizens who are unable to afford skyrocketing energy costs.

Bild newspaper reveals how the the nation’s Cities and Municipalities Association has urged local authorities to set aside public spaces to help vulnerable citizens in the colder months.

This isn’t how things were supposed to play out.

The “green energy revolution” was supposed to have totally transformed Europe by now.

But that hasn’t happened and it isn’t going to happen.

On the other side of the Atlantic, we continue to get more signs that the U.S. economy is headed for serious trouble as well.  For example, we just learned that home sale cancellations have risen to the highest level since the early days of the COVID pandemic…

Approximately 600,000 home purchase agreements fell through in June, according to a new analysis by Redfin.

And as the greatest housing bubble in our entire history starts to implode, companies in the industry continue to lay off more workers…

Another lender is resorting to layoffs as the mortgage market shrivels.

Tucked in near the end of a business plan released Tuesday morning, loanDepot announced it would shed 4,800 people, or 42 percent of its workforce.

The last housing crash was really painful, and this one is going to be even more bitter.

Meanwhile, the Biden administration is warning that we are about to see another huge inflation number…

“On Wednesday, we have new CPI and inflation data, and we expect the headline number, which includes gas and food, to be highly elevated, mainly because gas prices were so elevated in June,” Jean-Pierre said. “Gas and food prices continue to be heavily impacted by the war in Ukraine.”

The Federal Reserve has lost control as well, and if Fed officials continue to raise interest rates they are going to greatly accelerate this new economic downturn.

If you are waiting for our leaders to rescue us from the economic nightmare that is now staring us in the face, you are going to be greatly disappointed.

The great “unraveling” that I have warned about for so long is here, and it is going to be exceedingly unpleasant.

I hope that you are doing your best to get prepared for the road that is ahead, because we are in for a really bumpy trip.