Spendthrift Uncle Sam No Longer Can Afford to Run the World 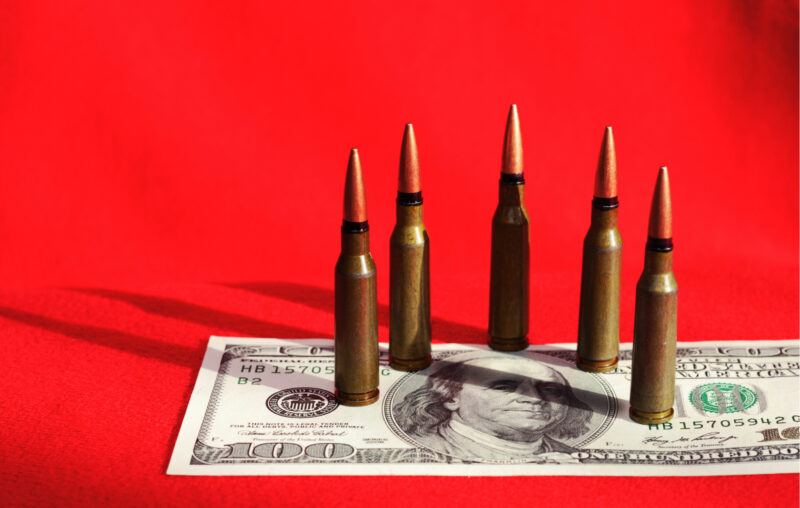 Virtually no one in Washington even pretends to be concerned about federal spending and deficits anymore. The Biden administration is going wild as the U.S. nears the debt-to-GDP record set after World War II.

Now President Biden is following his predecessor while outdoing all of them. There were trillions in Covid-19 relief even though the economy was already recovering. A proposal for trillions in “infrastructure” spending, much for non-infrastructure purposes. And trillions more for a social services splurge. Despite opposition from progressives, Biden even proposed an increase in military expenditures. Moreover, by lowballing estimates for Pentagon programs popular on Capitol Hill he invited legislators to add extra cash.

Current outlays are wildly out of control even without passage of the president’s latest budget-busting spending proposals. In its latest analysis the Congressional Budget Office concluded:

“CBO projects a federal budget deficit of $3.0 trillion in 2021 as the economic disruption caused by the 2020–2021 coronavirus pandemic and the legislation enacted in response continue to boost the deficit (which was large by historical standards even before the pandemic). At 13.4 percent of gross domestic product (GDP), the deficit in 2021 would be the second largest since 1945, exceeded only by the 14.9 percent shortfall recorded last year.”

There is no peacetime equivalent for today’s debt levels. CBO detailed the fiscal explosion:

Sadly, these figures look good compared to the longer term. The coming fiscal tsunami accompanying America’s aging population threatens to sweep all before it. No politician wants to address the problem, but no deus ex machina will magically deliver America from the coming budget crisis.

Over the coming decade the CBO expects Uncle Sam to run cumulative deficits of $12 trillion and bring the national debt to $36 trillion. However, everything will get much worse whenever the era of cheap borrowing ends. The agency warned:

“Initially, the effects of those lower interest rates more than offset the effects of the projected increase in federal debt. As a result, net outlays for interest in CBO’s projections decline from 1.5 percent of GDP in 2021 to 1.2 percent in 2023. Thereafter, rising rates and the projected increases in federal debt cause net outlays for interest measured as a share of the economy to more than double after 2023 in CBO’s projections. In 2031, such outlays reach 2.7 percent of GDP—0.7 percentage points higher than their 50-year average.”

Obviously, the economic assumptions upon which the CBO bases its figures are uncertain. Moreover, much depends upon decisions of future presidents and Congresses. Unfortunately, there is little reason to expect greater fiscal probity from Uncle Sam. If interest rates rise, legislators might be less likely to treat spending as a free lunch. But decades of wild overspending would already be embedded in the budget. And if rates rocket upward, another financial crisis might impend.

Moreover, there is no politically easy way to cut outlays. Today domestic discretionary spending—parks, salaries, grants, and such—runs about a sixth of total outlays. Even after Covid-19 outlays have run their course, Congress could zero out discretionary expenditures and be left with an ever-growing deficit. The real money is in five areas: Medicare, Social Security, Medicaid, interest, and the military.

Tackling the first two would entail a bitter battle against an expanding population of elders who believe they have paid for their benefits. Medicaid already is stretched, paying doctors so little to cover health care for the poor that many beneficiaries lack primary physicians and instead go to emergency rooms for most care. Interest payments could be cut only by repudiating federal debt, which would make it impossible for the U.S. to borrow (a benefit, actually, but not in Washington’s view!).

Which leaves the military. It already is a target of progressives. For instance, Lindsay Koshgarian of the National Priorities Project argued:

“As the Afghanistan War finally winds down, this should be a huge opportunity to dial back 20 years of military spending growth and make important investments in jobs, families, and public health. Instead, the president’s budget request takes what should be a ‘peace dividend’ from the withdrawal of troops from Afghanistan and squanders it on costly weapons and military bloat.”

Although it might pain some on the Right to admit, she is correct about the case for “dialing back” military expenditures. Pentagon outlays should be cut substantially.

Washingtonians talk about “defense,” but it has been decades since the so-called Department of Defense did much to protect America. Twenty years ago America was attacked for the first time since World War II (the Japanese occupied the Aleutian Islands of Attu and Kiska and launched some balloon bombs against the West Coast) and before that the War of 1812 (the many Indian conflicts and Civil War were essentially internal conflicts). Since the U.S. military was not prepared for domestic defense Congress created an entirely new agency, the Department of Homeland Security, to protect America.

Foreign and defense policies are intensely practical. Often complicated trade-offs are inevitable. However, the starting point should be that America is one of the most secure nations on earth. It has large oceans east and west and Pacific neighbors north and south. Which means an invasion is almost impossible. The last time a land conflict seemed plausible was during the Civil War when Great Britain controlled Canada and France claimed the Mexican throne.

Since then the only notable military threat facing the U.S. comes from nuclear-tipped missiles. Just Russia has a force comparable to America’s. China, though expanding its arsenal, remains far behind. The 20th anniversary of 9/11 highlights the threat of terrorism, but though an awful crime such attacks do not pose an existential threat to America. And the last two decades have demonstrated that bombing, invading, and occupying other nations is the worst response to terrorism. Doing so is likely to create more terrorists at great human and financial cost. Narrower and cooperative counterterrorism initiatives are far more likely to succeed than attempting nation-building around the globe.

Most of what the U.S. does today militarily is protect allies and less official “friends and partners,” as well as states pretending to be the foregoing (Saudi Arabia, for one). There are times such a policy might make sense, such as immediately after World War II, when NATO was envisioned as a temporary shield against the Soviet Union until Western Europe recovered economically. Dwight D. Eisenhower, NATO’s first supreme commander and later president, insisted that the U.S. should not act like “a modern Rome guarding the far frontiers with our legions.” Rather, he desired to help “these people regain their confidence and get on their own military feet.” And that should have happened long ago, yet America still has its divisions patrolling Europe—and many other lands.

The shock of Afghanistan’s collapse offers a good opportunity to rethink U.S. foreign policy, which is where decisions on military outlays are effectively made. That is, military spending is the price of one’s foreign policy. The more one wants to do in the world, the more manpower and materiel one needs. Hence the need to spend more. Nuclear weapons are relatively cheap, compared to manifold armored divisions, air wings, carrier groups, and expeditionary forces.

The starting point for U.S. defense policy is ground forces to protect American territory. Given the lack of any serious military threat, the active-duty army should be small, with a well-trained reserve to offer the possibility of rapid expansion in an emergency. A strong missile force and missile defense, substantial air and naval power, and possibly new space capabilities are necessary to keep away any enemies. Such a military wouldn’t be cheap but would not be nearly as expensive as today’s globe-spanning force with America’s defense essentially its last priority.

Beyond the defense of U.S. territory Washington has an interest in sustaining navigational freedom. That justifies a larger navy, but America should work in partnership with other nations. Europe and Japan have sizable modern navies; South Korea, among other friends, is augmenting its force. Today threats to open seas are small—China, as the world’s greatest trading power, would be vulnerable to retaliation if it sought to close off waters in the Asia-Pacific.

Much of the world interests the U.S. but little of the world matters much to the global superpower. Latin America is well within Washington’s sphere of influence. Africa’s biggest security threats are internal, not external, and Beijing ‘s overtures often have not been warmly received.

The Middle East no longer is important to America, which is now the world’s leading energy exporter. Anyway, nuclear-armed Israel and the Persian Gulf states, along with Egypt and possibly Turkey, are more than enough to balance against Iran, which poses no meaningful threat to America. Afghanistan and Central Asia are problems which belong to nearby big powers—Russia, China, India, Pakistan, and Iran. The U.S. shouldn’t have fought a 20-year war to bring democracy to the region and has no reason to return in the future.

America has reason to prevent a hostile power from gaining control of the Eurasian landmass. However, the Cold War is over. Europe has vast economic and population advantages—around 11-1 and 3-1, respectively—over Russia and should be responsible for its own defense. There is no need for continued American military subsidies for the continent, though a withdrawal should be phased, giving European governments time to adjust.

The only plausibly serious threat is China, but world domination is well beyond its power. The People’s Republic of China borders 14 nations, four of which have been involved in war (India, Koreas, Vietnam, Russia). The PRC also fought its island neighbor Japan. Just as the PRC can use anti-access/area denial technologies against America, its neighbors can do so against it.

Beijing primarily poses an economic challenge to America, which is best met by the U.S. reforming itself—improving economic policy, educational quality, and more. Washington also should make clear that its allies are principally responsible for their own defense. If Tokyo fears the possibility of Chinese aggression, why does it still spend just one percent of its GDP on the military? South Korea has about 50 times the economic strength and twice the population of North Korea and needs no help to protect itself. Washington should act as an offshore balancer, concerned about the independence of friendly states (which Beijing has not threatened, other than Taiwan, which it sees as part of China) but not their peripheral interests, such as island ownership, today’s only potential source of conflict with the PRC.

Obviously, there remains room for argument over details, including exactly what force structure would be necessary to implement such a foreign policy. However, the armed forces would be markedly smaller than today. Ending the defense dole for Europe and the Middle East would be major steps forward. Limiting any military commitment to Asia also would be critical. Indeed, avoiding war with China absent an existential threat to the U.S. would be a vital national interest. Defending America is easy; projecting power nearly 8,000 miles away not so much, which would be an invitation to defeat.

U.S. policymakers should address the incoming tsunami of elder-related spending. Regaining fiscal control also requires cutting nonessential outlays everywhere, including the military. Washington should stop trying to run the world and concentrate on defending Americans. The U.S. would be safer- and save money in the process.

This article, Spendthrift Uncle Sam No Longer Can Afford to Run the World, was originally published by the American Institute for Economic Research and appears here with permission. Please support their efforts.