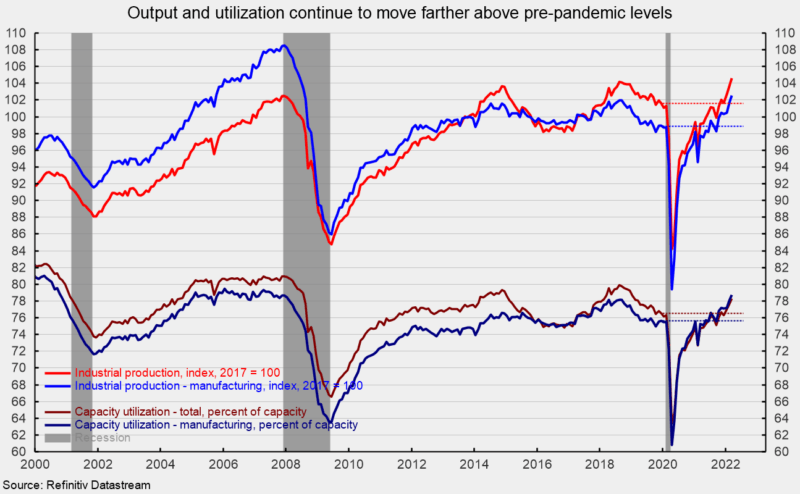 Industrial production increased 0.9 percent in March following a similar 0.9 percent gain in February and a 1.0 percent rise in January. The gains result in a very robust 12.1 percent annualized pace for the first three months of 2022 and pushes total industrial output to its highest level ever, and clearly above the December 2019 level prior to the pandemic (see first chart). Over the past year, total industrial output is up 5.5 percent.

Manufacturing utilization increased 0.3 points to 78.7 percent, well above the December 2019 level of 75.6 percent and the highest level since July 2007, and slightly above its long-term average of 78.1 percent. However, it remains well below the 1994-95 high of 84.7 percent (see first chart).

Mining output accounts for about 14 percent of total industrial output and posted a strong 1.7 percent increase last month (see top of second chart). Over the last 12 months, mining output is up 7.0 percent.

Utility output, which is typically related to weather patterns and is about 12 percent of total industrial output, rose 0.4 percent (see top of second chart) with natural gas off 2.9 percent but electric up 0.9 percent. From a year ago, utility output is up 7.5 percent.

Among the key segments of industrial output, energy production (about 27 percent of total output) increased 1.2 percent for the month (see bottom of second chart) with gains across four of the five components. Total energy production is up 8.2 percent from a year ago but is slightly below the December 2019 level (see third chart). Motor-vehicle and parts production (slightly under 5 percent of total output), one of the hardest-hit industries during the lockdowns and post-lockdown recovery, continues to be impacted by a semiconductor chip shortage, though output gained sharply in March. Motor-vehicle and parts production jumped 7.8 percent for the month following a 4.6 percent drop in February and a 1.1 percent rise in January (see bottom of second chart). From a year ago, vehicle and parts production is up 3.9 percent but is equal to the December 2019 level (see third chart).

Total vehicle assemblies rose to 9.75 million at a seasonally-adjusted annual rate, the highest since January 2021 but still well below the pre-pandemic average (see fourth chart). That consists of 9.47 million light vehicles and 0.28 million heavy trucks. Within light vehicles, light trucks were 7.62 million while cars were 1.86 million.

The selected high-tech industries index rose 1.4 percent in March (see bottom of second chart), and is up 8.9 percent versus a year ago, and about 22 percent above December 2019 (see third chart). High-tech industries account for just 1.9 percent of total industrial output.

All other industries combined (total excluding energy, high-tech, and motor vehicles; about 67 percent of total industrial output) rose 0.3 percent in March (see bottom of second chart). This important category is 4.5 percent above March 2021 and 4.0 percent above December 2019 (see third chart).  Industrial output posted a robust, broad-based gain in March. While many measures of output are back to or above pre-pandemic levels, ongoing shortages of and disruptions to labor supply, rising costs and shortages of materials, and logistical and transportation bottlenecks continue to restrain the ability of manufacturers to meet the significantly higher demand that has emerged following the lockdown recession. Furthermore, sustained upward pressure on prices, ongoing waves of new COVID-19 cases, geopolitical turmoil and global economic disruptions surrounding the Russian invasion of Ukraine, and a new Fed tightening cycle are sustaining an elevated level of risk and uncertainty for the economic outlook.

This article, Strong Gain in Industrial Output in March, was originally published by the American Institute for Economic Research and appears here with permission. Please support their efforts.