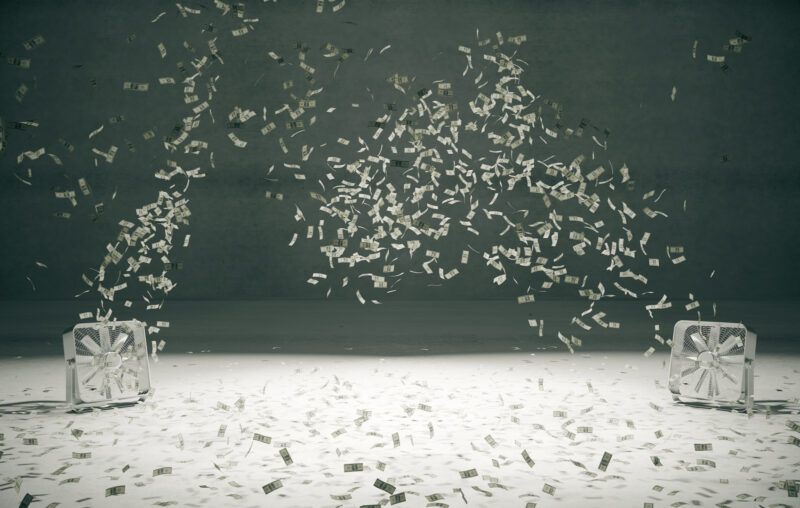 Prominent writers and investors have described today’s economy as being addicted to loose monetary policy, especially the QE variety. There may be something to that analogy. After all, the Fed has barely commenced tapering, and some of the economy’s withdrawal symptoms are acute. Things are especially interesting, or troubling, when we look at how intertwined monetary and fiscal policy have become.

As for the Fed’s share, it exceeded 10% during World War II, yet in the post-WWII period, Fed holdings hovered between 5% and 6% every year up to 2010. Then, in a clean break from the trend, the second half of 2009 saw Quantitative Easing become utilized toward the direct purchase of medium- and long-term U.S. Treasuries. Consequently, as the chart shows, Fed holdings more than doubled in 2011 and have remained historically elevated above 10% of GDP for all years through 2019. In 2020, the Fed’s share more than doubled a second time. By the time of the most recent data available in 2021, the Fed’s share had reached 24.3% of GDP, far exceeding its peak of 10.4% during WWII.

The chart might even understate the magnitude of the Fed’s public debt holdings when looking more closely at medium- and long-term Treasuries. According to a May 2022 New York Federal Reserve report of open market operations, as of December 2021, the Fed owned 38% of 10-30 year bonds. From this point forward, there is a long way to go in winding-down to roughly pre-pandemic levels.

Some economists say that a ballooning Fed balance sheet is nothing to worry about, and the Fed itself has vowed to sterilize QE from affecting bank reserves. However, George Selgin, John Cochrane, James Dorn, and others have been arguing that very high Fed holdings of public debt compromise the central bank’s independence while risking inflation. Today’s inflation is caused partly by historic expansions of the money supply needed to finance Washington’s spending sprees. As St. Louis Fed economist Fernando M. Martin has shown (see figure Money and Deficits), since 2016 the growth rate of M2 closely tracks the growth rate of budget deficits. Even the floor system of paying interest on excess reserves (IOER) faces exposure. As Thomas Hogan argued recently on Econlib, during the Great Recession the Fed could have met its unemployment target by doing less QE, had it opted to lower IOER.

Now, after holding down interest rates for nearly a generation, the shift to quantitative tightening combined with rising yields will squeeze the federal budget. As we recently showed, net interest is projected to exceed 10% of the budget within the next five years. The financial pain of winding down from 24.3% of GDP might be too much to bear, prompting fiscal policymakers to again pressure the Fed. Can Congress quit the Fed’s easy money policy that has allowed them to push debt levels well above 100% of GDP, or will the addiction demand more QE to support Washington’s spending habit?

This article, The Fed’s Share of Public Debt: Worsening Withdrawal Symptoms?, was originally published by the American Institute for Economic Research and appears here with permission. Please support their efforts.