The Global Recession of Classical Liberalism 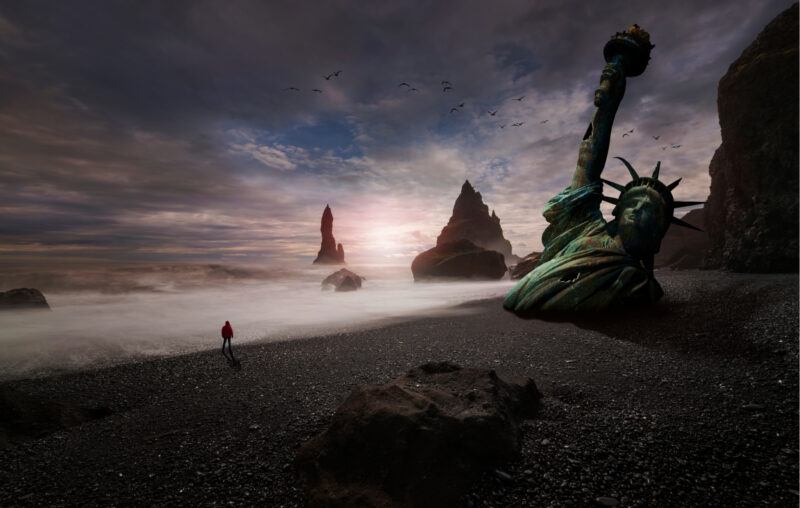 The scale of classical liberalism’s retreat became ever more visible in 2021. Its recession is global—spanning the Americas and enveloping Europe and Asia. It is pan-ideological: not only are free nations becoming less free, unfree nations are becoming more unfree. It is not only that the left is moving farther left but the parties of the right, currently the best political hope for classical liberalism, are turning to various forms of illiberalism. And the results for policy have been comprehensively deleterious, threatening to reorient everything from free trade to competition law to social insurance in a more statist direction.

As Americans, we mostly focus on what is happening at home.  The momentum against classical liberalism can be measured by contrasting the legislative programs of the Obama and Biden administrations. To be sure, President Obama pursued legislation that moved the nation in a more statist direction on health care and financial services. But Biden has been open about his hope to create the largest increase in the welfare state since Lyndon Johnson. His proposed legislation would have created entitlements to free pre-K education, free community colleges, paid leave from all employment, and rights to long-term care. It would lower the Medicare age to 60 and expand the scope of the services covered by the program. Its aspiration was to create a European-style, cradle-to-grave welfare state.

To be sure, the so-called Build Back Better bill may not be enacted into law because of the narrow Democratic majorities in Congress. But the very boldness of the proposals given these narrow majorities shows that this party is transforming itself into a social-democratic party of the left like those in Europe. And whatever the result for the legislation this year or next, it will become a template for the next time that Democrats have a substantial majority—an inevitability in a two-party system.

The energy on the left is even more striking abroad. In this hemisphere, Chile has elected its most left-wing president since Salvador Allende, an ideologue who promises that his administration will be the “graveyard of neoliberalism.” Its recent constitution-making takes aim at the free market society that the “Chicago boys” created on liberal principles imported from the University of Chicago. Peru and Honduras too have elected far-left presidents. The authoritarian left continues to hold Cuba and Venezuela.

In Europe, the most important nation, Germany, elected a center-left government after years of governing from the center. No right of center party leads any major nation on the continent.

No nation in Asia matters more than China, and it has been moving left. Of course, it has been a communist-ruled nation for decades but until Xi’s accession, green shoots of freedom were growing, particularly in the economy. But Xi is bringing the market sector to heel, directing companies to leave foreign stock exchanges, putting commissars in every office, and cutting large companies down to size when they pose any competition to the state. This year he crushed freedom in Hong Kong, closing down a city-state that was a bastion of classical liberalism and showing that China was reverting to the kind of twentieth-century totalitarian regime that cannot be trusted even to keep to the terms of the treaties it signs.

Beyond China, other important authoritarian nations are also becoming more intolerant of dissent. For instance, Russia has jailed the leading opposition leader, and its governing party has just won elections widely regarded as rigged.

The Right‘s Abandonment of Classical Liberalism

Another mark of classical liberalism’s waning fortunes is its weakening on the right. While it is notable in the United States, this phenomenon too is global. Here at home most of the leading contenders for the next Republican presidential nomination emulate former President Trump, not in his style, but in many of the policies that diverged from classical liberalism. There is far less enthusiasm for free trade and more sympathy for industrial policy. Even more important is what is now absent—any interest in the kind of entitlement reforms that were routinely proposed to prevent transfer programs like Social Security and Medicare from overwhelming the federal budget. Much of the Republican Party is no longer a party of deregulation and low social spending, even if it retains an attachment to low taxes.

The story is the same for the oldest political party of the right in the world—the British Conservatives. There, Boris Johnson has made a decisive break from Thatcherism. He has raised taxes, promised to increase social spending so as to “level up” the less developed parts of the nation with London, and vowed to become a world leader in global warming regulation.

On the continent, the already weak classical liberal parties have become even less important parts of the coalition of the right. In France, they will likely not even make the presidential run-off, being beaten out by either the National Front or a provocative journalist who promises to make France great again. In Italy, the classical liberal strand of the right has almost disappeared, being replaced by parties that want to facilitate rent-seeking or increase the welfare state.

In Japan, the long-time governing Liberal Democrats adopted some liberalizing policies under Shinzo Abe but now are returning to their corporatist baseline.

And just as liberalism has receded globally, it has also receded comprehensively across policy spaces. One of the core triumphs of classical liberalism since the period of its formation in the eighteenth century was that of free trade over mercantilism. Practically speaking, from World War II to the end of the century free trade became a global policy with successive rounds of world negotiations cutting tariffs and regulatory barriers. Nations entered more local free trade zones as well, as the United States, Canada, and Mexico did with NAFTA. But world trade talks have stalled for a decade with little prospect of restarting them. The international dispute settlement structure that sustained world trade rules is in danger of collapse.

Free trade zones are no longer proliferating. The United States under both Republican and Democratic administrations has refused to join the Trans-Pacific Partnership. Even the obvious geopolitical advantages of uniting the democratic nations of the Pacific against China have been insufficient to overcome the forces of protectionism.

The Biden Administration has been nominating regulators who would break with decades of consensus that regulation should be limited to market failures. For instance, Saule Omarova, the failed nominee to be Comptroller of the Currency believes that the Federal Reserve should replace key functions of private banks. The newly confirmed chair of the FCC, Lina Khan, wants to upend a half-century of anti-trust law that focuses on promoting the welfare of consumers in favor of an expansive vision that would give government far more power to intervene to correct various inequities she perceives in the market. Antitrust is an excellent barometer of the fortunes of classical liberalism, because the more interventionist is antitrust, the less confidence there is that the market can regulate itself for the public good.

Even the growing debate on the right over constitutional interpretation reflects a diminution of the forces for liberty. Originalism seeks to restore the original Constitution, which is a charter for liberty both in its restraints on government and in its ample set of individual rights in the Bills of Rights, which were extended by the Fourteenth Amendment. The very name of the new right-wing alternative to originalism—common good constitutionalism—makes clear that its starting point is no longer liberty but the good of the collective.

What are the reasons for the long receding roar of classical liberalism? One is continuing hangover from the financial crisis of 2008. There is a diffuse sense that the crisis showed that capitalism failed, despite the substantial arguments that the crisis was a consequence in large part of the easy money policy of the Federal Reserve and lax lending policies of Freddie Mac and Fannie Mae—government-backed companies. And the decision to bail out some of the banks that made bad decisions—hardly in keeping with classical liberalism—seemed outrageous. Citizens are willing to tolerate a lot of inequality if they feel that the rules for getting rich are not rigged, but the financial crisis called law’s neutrality into question.

Third, and relatedly, at least in the West, there may be diminishing returns on the economic growth that classical liberalism has promoted. It is this relative comfort that allows citizens to focus on prioritizing collective projects or wallowing in their identity even if these tendencies become antithetical to economic growth. That is the reason we now see on the right the claim that liberalism, including classical liberalism, has failed. That contention can become politically resonant in the West only after the memory of the miseries of the pre-liberal world have faded.

Classical political theorists thought republics went through cycles where the republic declined after delivering relatively high levels of prosperity as the complacency of comfort and luxury naturally set in. We may be seeing a modern vindication of this ancient thesis.

The New Year’s resolution for friends of liberty must be to develop some new strategies for its revival. The old ones are not working.

This article, The Global Recession of Classical Liberalism, was originally published by the American Institute for Economic Research and appears here with permission. Please support their efforts.