The Nostalgic Genius of Stranger Things 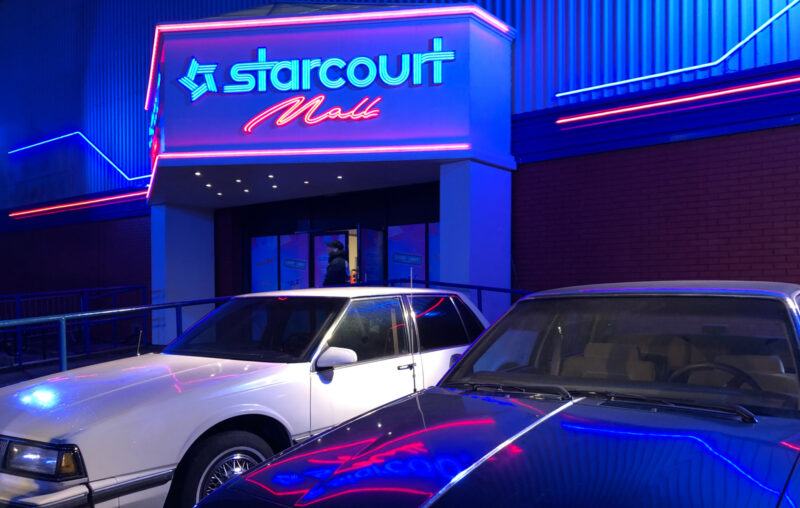 We live in an age of zealous reformers, which means that it is often necessary to fight tooth and nail for the normal things. Every cup of coffee makes a statement about labor standards and the environment. Every pronoun or casual purchase must all be mentally vetted. A friend takes to Facebook seeking recommendations for a casual beach read for her upcoming vacation. “But,” she specifies, “I greatly prefer books by women, BIPOC, or LGBTQ authors.” Naturally, she isn’t the sort of benighted soul who would just sit down and enjoy a book.

Most Americans are thoroughly sick of this. They were happy to “end racism,” and leave same-sex couples alone. Somehow things seem to have gone off the rails, though. The social justice tantrums have become exhausting, and they never seem to end. Can’t a person just watch a game now and then, without being harangued and lectured?

Corporations are in a particularly hard spot, especially if they specialize in entertainment. Influencers pressure media to stay woke, but customers are tired of it. Beyond that, it can be hard to tell a good story without running afoul of progressive pieties somewhere or other. An interesting narrative requires some serious moral content, along with characters that have depth and complexity. In a well-told story, a character of any age, sex, race, or religion might have admirable or vicious qualities. Men and women might interact in ways that point towards larger truths about manhood, womanhood, or heterosexual attraction. Heroes rescue people. This landscape is littered with mines.

Necessity breeds invention, though. Facing falling profits and ever-deeper cuts, Netflix has resorted to desperate measures. They’ve had to entertain their customers. This summer, they’ve gone for broke with a bold new season of the hit series, Stranger Things. This one had to sizzle. Netflix couldn’t afford anything less than a home run.

It delivered. This is some great television. I’m the sort of person who rarely goes to the movies, because it’s hard for me to stare at a screen for two-plus hours without my workaholic mind flipping anxiously over to my to-do list. Stranger Things IV ran for nearly thirteen hours, and I enjoyed every minute and wanted more. Clearly I’m not alone, because the series just became the second in Netflix history to rack up more than a billion viewing hours.

How did they do it? Really, it was a neat trick. The Duffer Brothers figured out how to use nostalgia in a strategic way, to open a space for a great story.

The Power of Memory

Nostalgia sells, as the entertainment industry discovered long ago. Its appeal can be abused, however. Everyone is familiar with the mediocre, nothing-but-fan-service sequel that hardly bothers to come up with a plot. Nostalgia is boring when it’s the only thing on the menu.

Memory can truly be magical, though. Nostalgia is specially intoxicating when it draws us back to earlier periods of life, creating a pleasant sense of losing the weight and anxiety of intervening years. Psychologists have a name for this: “regression in the service of the ego.” It’s not as bad as it sounds. All of us, from time to time, find ourselves searching for something remembered from childhood or youth: a song, a television show, a particular candy bar. The world has never been particularly simple, but we ourselves were simpler in youth, and we can attach that same simplicity to things remembered from long ago. The ignorance or innocence of youth enabled us to experience certain things with an intense immediacy that can be difficult to recapture later in life.

In the context of a television series, that nostalgic soft filter can be freeing. When therapeutic regression is the goal, it suddenly seems permissible stop fretting and just enjoy certain things. The Duffer Brothers employ this tactic masterfully, setting their show in a Midwestern town in the 1980s, and then drenching it in nostalgic detail. Kids ride their bikes all over town, hang out at the mall, and have strategy meetings in Family Video. Hawkins, IN is swarming with jocks, cheerleaders, nerds, and scrunchie-wearing moms. These stereotypes come with their own attendant hazards, but somehow the show defuses them, sprinkling in humorous and often farcical details to reassure us that nothing need be taken too seriously. Like Citizen Kane, reunited with his Rosebud, we eagerly accept the invitation to sit back and enjoy.

Through that benevolent lens of memory, Stranger Things manages to supply lovable characters, epic themes, satisfying dialogue, and even a plot. There are visually thrilling scenes, but they seem to augment the story instead of driving it. The memory filter keeps working its magic, lulling us into relaxing our critical faculties. We’re in Memory Lane now, folks. Simpler times call for gentler judgment.

Thus, it is permissible to enjoy the charming boys’ club that stands at the center of the whole drama. Adorably nerdy and steadfastly devoted to one another, these four friends remind us why we used to take innocent pleasure in boy-themed stories, without angrily demanding more “women, BIPOC, and LGBTQ.” Our boys are growing up now, but we’ve followed them so long that I almost want to pinch the cheeks of the now-lanky Mike Wheeler (Finn Wolfhard) and coo about how much he’s grown. Beyond the boys’ club, Sheriff Hopper (David Harbour) supplies some strong-and-silent masculinity, while Steve Harrington’s (Joe Keery) moral reform story culminates in this season with a heartwarming confession of his fondest dream. It turns out, the jerkwad jock really wants to be a Winnebago-driving dad, trundling off with his six kids to see America first.

That’s a lot of manliness, but the female characters easily hold their own. Nancy (played by Natalia Dyer, presumably named for Nancy Drew) supplies a Hermoine Granger-like element, while Joyce Byers (Winona Ryder) makes a delightfully dorky mom figure. But the real breakout Stranger Things star has been Millie Bobby Brown, as Eleven, the team’s bona fide superhero. She’s the kind of girl who can move mountains (or at least military helicopters) with her mind, before throwing on earrings for the high school dance. Supergirls are a cultural powder keg today, but this show reminds us how much fun they can be, from Pippi Longstocking to Sabrina to Buffy the Vampire Slayer. This needn’t have anything to do with grinding the patriarchy to dust. We enjoy it, for roughly the same reason it can be fun to make heroes out of ragged orphan children, shepherd boys, or hobbits. There’s an underdog element. She’s a psychokinetic badass, and yet, just a girl. We might be tempted to obsess about the implications, but look! Did your mom ever have big hair like that? Mine did too. Pass the popcorn.

There are monsters in Stranger Things. Actually, there are lots of monsters. I’ve never loved horror films, but the creative ghoulishness of these monsters is arresting, especially in this season, when we find Soviet scientists are trying to raise them in artificial wombs. No one clearly explains why the Soviets want super-strong, super-evil monsters. But need we ask? Soviets are bad! Also, they like power! Though I wouldn’t recommend Stranger Things for its trenchant geopolitical insights, there is something deeply satisfying about the scenes from frozen Siberia. In hindsight, the apparent moral clarity of the Cold War is downright soothing. No apologies are made for presenting the Soviet Union as frightening and oppressive. Who wants a miscellaneous crime lord or invading alien race, when we can have this?

Stranger Things is not Citizen Kane or The Demons. This is high-quality popcorn television; there’s no need to overthink it. Even popcorn entertainment is better, though, with some moral content. Friendship, loyalty, and courage have been important ingredients for all seasons of Stranger Things, but this one offered another compelling theme that threaded its way through each episode. It’s about the struggle to confront all of our monsters without and within. How do we come to terms with our own sins and mistakes? What do you do when you’re worried that you may be the monster?

Vecna, the looming villain of this season, preys on the minds of people who are wrestling with a deep sense of moral guilt. A veteran relives war memories in which his decisions caused innocent people to die. A young man is tormented by a car accident for which he feels responsible, which cost a close friend his life. Their tormented consciences become Vecna’s food, as he uses his victims’ unresolved guilt to destroy even more of what they love. Those stories set the stage for Eleven’s personal drama, revolving around an anxious effort to determine whether or not she is one of the good guys. Those themes of guilt, repentance, and accountability move the plot at several important junctures.

Operating under the cover of the nostalgia veil, Stranger Things explores potentially-explosive themes in ways that are thought-provoking and sometimes quite moving. Vecna’s back story is explored at some length, partly to make clear that he is not first and foremost the product of the stereotypical “bad childhood.” Meanwhile, both Eleven and her friend Max Mayfield (Sadie Sink) did have tragic childhoods; both have been victimized in serious ways by people they had reason to trust. The abusers are never excused, but the show’s focus is not on abuse and trauma, but rather on the girls’ efforts to rise above that troubled past, working for something honorable instead of becoming monsters themselves. The implication is clear. People must take responsibility for their life’s trajectory, even if they have suffered from real injustice. Everyone has their own monsters to fight.

The Duffer Brothers can tell a story like this without hackneyed overwriting, because at this point the pieces are already in place. Through every season of Stranger Things the scariest parts have revolved around a kind of apocalyptic alter-universe called “the Upside Down,” where matter seems hyper-responsive to mind. Sometimes hellscapes are portrayed as rocky, barren places, but the Upside Down is malevolently organic, filled with pulsing, fleshy pillars, and snaky, sinister vines. Monsters love it, as a fertile ground for growing their wicked fantasies. In the Upside Down, curses and nightmares are made flesh.

It’s the perfect shadow land for a show that provides a welcome change from the endless meditations on alienation, loss, meaning gaps, and the struggle to forge meaningful human connections in a barren, modern world. This show is not about any of that. It’s about things that go bump in the night.

Just as in Alice’s Wonderland, though, a world with different rules may open new perspective on our own, and perhaps this has really happened with Stranger Things. The Duffer Brothers used nostalgia to shift the rules of our exhausted contemporary discourse, slipping free from some of the constraints that have straightjacketed so much of our cultural life in recent years. They weren’t trying to start a cultural revolution. They just wanted to tell a humdinger of a story. Now that our appetites have been whetted, though, viewers might decide that they’re hungry for a few more.

This article, The Nostalgic Genius of Stranger Things, was originally published by the American Institute for Economic Research and appears here with permission. Please support their efforts.