The Other Great Debate 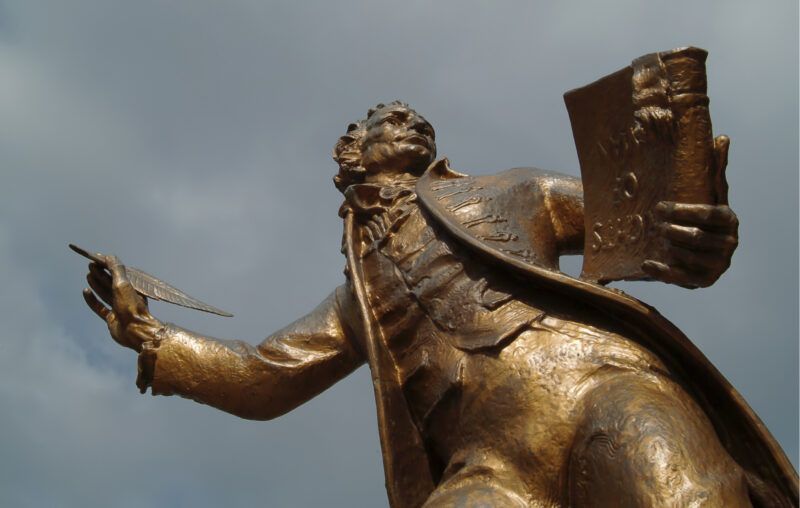 As arguments over the true meaning of “conservative” in the American context have intensified, the debate between American theorist and rabble-rouser Thomas Paine and the British statesman Edmund Burke has become of increasing interest. Some, including writer Yuval Levin, have characterized the “Great Debate” as the origin point for modern divisions of left and right.

I am in no way discounting the importance of the debate between Burke and Paine. Their quarrel, and, as Levin argues, Paine’s eventual victory in the war of ideas, had enormous implications for the ways that traditions and institutions are reflected in American political thought.

But there was another “Great Debate” (also involving Paine) that had equal, if not greater consequences for the United States. More specifically, a written debate between Paine and John Adams on the proper structure of government was (and is) critical to how Americans thought (and think) about democracy.

Paine’s Common Sense is still one of the best-selling writings in American history, but it was not met with universal approval. John Penn and William Hooper, both delegates to the Continental Congress from North Carolina, were unnerved by Common Sense’s radically democratic propositions.

At issue was Paine’s idea that “each Colony be divided into six, eight, or ten, convenient districts, each district to send a proper number of Delegates to Congress, so that each Colony send at least thirty. The whole number in Congress will be at least 390.” Paine’s specific numbers usually amounted to brainstorming, but the higher principles were clear: The legislature would be unicameral, and the representatives elected directly.

This was a bridge too far for Penn and Hooper, and the two men sought to propose an alternative. To that end, they solicited the help of Adams, who, while appreciative of Paine’s work, was equally uncomfortable with Paine’s democratic proposals. Adams later wrote that “[Paine’s] plan was so democratical, without any restraint or even an Attempt at any Equilibrium or Counterpoise, that it must produce confusion and every Evil Work.”

The result of Penn and Hooper’s request was Adams’ Thoughts on Government, which was published in Philadelphia (where both Paine and Adams resided at the time) in the spring of 1776.

In terms of the proper functions of the national government, Paine and Adams were actually far closer than many scholars give them credit for. Both desired a commercial republic where liberty would be the mechanism for promoting the common good. Among other things, they both advocated for a strong national defense, a unified postal system, and public (or publicly-funded) education.

Where the two men differed so severely was in terms of structure. Adams cast doubt on Paine’s idea of a single, representative legislature, arguing that “a single assembly is liable to all the vices, follies, and frailties of an individual; subject to fits of humor, starts of passion, flights of enthusiasm, partialities, or prejudice, and consequently productive of hasty results and absurd judgments.”

Adams instead proposed a government with three branches and a bicameral legislature. Such a system, he argued, would “teach [legislators] the great political virtues of humility, patience, and moderation, without which every man in power becomes a ravenous beast of prey.”

While Penn and Hooper were pleased with Adams’ response, Paine was not. The latter was so incensed by the publication that he marched to Adams’ house so he could yell at him personally. While the conversation remained (mostly) civil, Adams did not hold his true feelings back.

In a vacuum, this could have been little more than an amusing anecdote. But Adams was already a profound intellectual figure at this point, and Paine had become something of a celebrity. Later on, Adams and Paine’s mutual friends would include the likes of Thomas Jefferson, Benjamin Franklin, and Benjamin Rush. To put it succinctly, people paid attention to this debate.

When newly-declared states wrote their constitutions, they clearly picked a side. By the end of 1776, Pennsylvania had modeled their constitution off Paine’s ideas, while North Carolina picked Adams. Indeed, most of the early victories went to Adams. Adams was critical in the drafting of the Constitution of the Commonwealth of Massachusetts, which later served as a template for the United States Constitution.

The Constitution of 1787 was probably Adams’ greatest victory. He got the executive veto he so desired, as well as a bicameral legislature that reflected his aristocratic tendencies rather than Paine’s democratic ones. While Paine generally defended the Constitution, its conservative and elitist nature outraged him, and his letters and publications frequently demanded various reforms.

But, much like his debate with Burke, Paine may have won the war. Though Paine would have rather seen the Senate abolished, its current, more democratic constitution reflects him far more than it does Adams. Recalls and referendums around the country give the average citizen far more control over policymaking, and modern politicians from FDR to Ronald Reagan have quoted Paine with fondness. While Adams has undergone a recent revival, he, and his political thought, are still (undeservedly) underappreciated.

That said, it is, now, difficult to pick a “side” between Paine and Adams. Whichever man one’s political persuasions may favor, the country is undoubtedly a heterodox agglomeration of their ideas, and we would not be who we are without our divergent elitist and democratic impulses. One thing that can be said for their rivalry is that they recognized — albeit with extreme bitterness and resentment — the importance of each other’s contributions to the American Revolution. If we could do the same with one another — even if it’s with hostility — perhaps we could devote more energy to preserving our country’s liberty-minded institutions.

This article, The Other Great Debate, was originally published by the American Institute for Economic Research and appears here with permission. Please support their efforts.