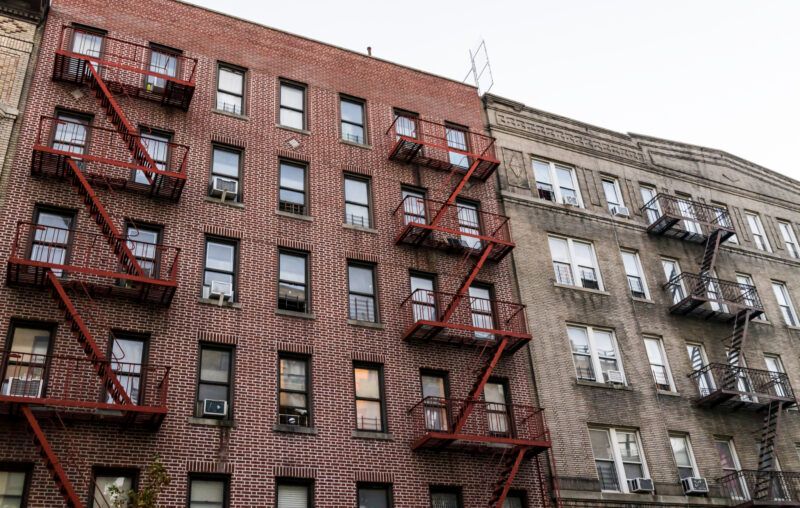 Last week (June 21), in its biannual circus, New York City housing regulators once again decided how much landlords will be able to raise rents. Despite inflation raging at a 40-year high of 8.6%, they decided on an increase of 3.25%. In real terms, this is a rent *reduction* of 5.35% (3.25% minus 8.6%), assuming the costs of maintaining the building rise in line with inflation.

This is a tragedy on multiple levels. Owners of New York rental property must face the challenge of operating a building as costs such as labor, supplies and taxes (yes, taxes are never capped) rise at a much faster rate than the rents the landlord can legally charge. We have gone down this path before. The last time inflation was this high was in the 1970s, when annual inflation averaged 7%. The costs of operating buildings rose much faster than legal rents, and the result was disastrous.

Take a look at these two photos. One of these is Warsaw in 1945, the most severely destroyed city in Europe from World War II. The other shows a neighborhood in the South Bronx of New York City in 1977. Which one is which? Read to the end for the answer.*

In a quote often repeated by Milton Friedman, Swedish economist Assar Lindbeck said, “In many cases rent control appears to be the most efficient technique presently known to destroy a city — except for bombing.” Judging from the photographic evidence, he is right.

The tragedy of rent control goes far beyond just the palpable destruction brought on by high inflation and lagging rent increases, although we may be headed there again.

A quiet tragedy plays out every day in the lives of everyone who suffers from the stunting of the New York housing market caused by rent control. There is the suffering of the landlords, who unjustly have their properties reduced in value and even destroyed economically, when their legal rents can no longer support maintenance of their buildings. This tragedy is exemplified in an anecdote I read years ago at one of the biannual rent increase hearings. At a raucous hearing where dozens of “pro-tenant” activists demanded rent freezes and rent rollbacks, the owner of a small building approached one of the czars who would determine his fate. He said, “You are killing me. I may have to abandon my building and, with it, the savings of my family that bought it to provide retirement income.” The rent regulator-czar turned to him and said, “Look around. For each of you [landlords] there are twenty of them [tenants].”

The hearing ended with a 2% permitted rent increase. The fate of that landlord and his building is not known, but the fate of thousands of similarly positioned landlords whose property was destroyed completely by rent control is known.

Tenants also suffer, although many tenants only perceive their immediate situation and clamor for lower rents. They suffer when landlords cannot afford to properly maintain their buildings. For hundreds of thousands of tenants in the 1970s, they suffered when their landlords were forced to abandon their buildings. They lost their homes completely. They also suffer in another way, by being “locked into” their shabby, poorly maintained rent-regulated apartments because they cannot afford to move. In Manhattan, more than a third of rent-regulated tenants stay in their homes for 20 years or more, compared with less than 3% of tenants living in market-rate housing. Those extra years are years spent in shabby, soul-destroying fear, often alone as regulated tenants cling to their below-market apartments, living alone after spouses pass away and children leave.

The other group that suffers are all newcomers to the city. Rent control pits future New Yorkers against existing ones, as the much higher “market” rents paid by newcomers partially subsidizes the below-market regulated rents. It is not uncommon for two tenants living across the hall from each other in identical apartments to be paying wildly differing rents, say $5,000/month for a two bedroom in Apartment A and $700/month for the multi-decade-long rent controlled tenant in Apartment B. This government-mandated wealth transfer is unjust and absurd.

The Upshot of the Rent Control Fiasco

Because of rent control and its violations of the rights of landlords and tenants, New York has suffered from a severe paucity of new rental construction. In many years in the 1970s and into the 1980s, more units were *abandoned* each year by landlords than were built. This coincided with a decline in New York City’s population of nearly 1 million people, from 8 million to 7 million. There were other causes of this decline, too, such as sky-high and novel taxes, which typically makes New Yorkers pay the highest combined city/state/federal income taxes in the country. But rent control had a particularly destructive effect on the city. It effectively “bombed” vast areas of New York into Mad Max-style wastelands.

The other result of rent control has been the government’s rapid encroachment and takeover of the housing market, as the city in costly and coercive fashion tries to make up for the shortfall in private construction. This includes:

New Yorkers face a disaster which will only get worse, unless the government reverses these policies. It will especially get worse as inflation picks up. If the city keeps reducing real rents by capping increases below the inflation rate (as it is doing now), and if inflation continues for more than a few years, we will see building abandonments once again. But even if things don’t get dire enough for a repeat of the 1970s rent control “bombing” of the city, the quiet desperation of landlords and tenants will remain. Landlords will watch their investments tank in value and tenants will continue languishing in crumbling, awful apartments as they experience the “benefits” of rent control.

This New Yorker offers some advice to all those localities who recently imposed rent control or are thinking about doing it: repeal it while you can, before the issue becomes more politicized. And if you are thinking about imposing it: DON’T.

*The left photo shows the South Bronx in 1977. The right photo is Warsaw in 1945, after the destruction of World War II.

This article, The Perpetual Tragedy of New York’s Rent Control, was originally published by the American Institute for Economic Research and appears here with permission. Please support their efforts.