The Return of Gonzo Journalism 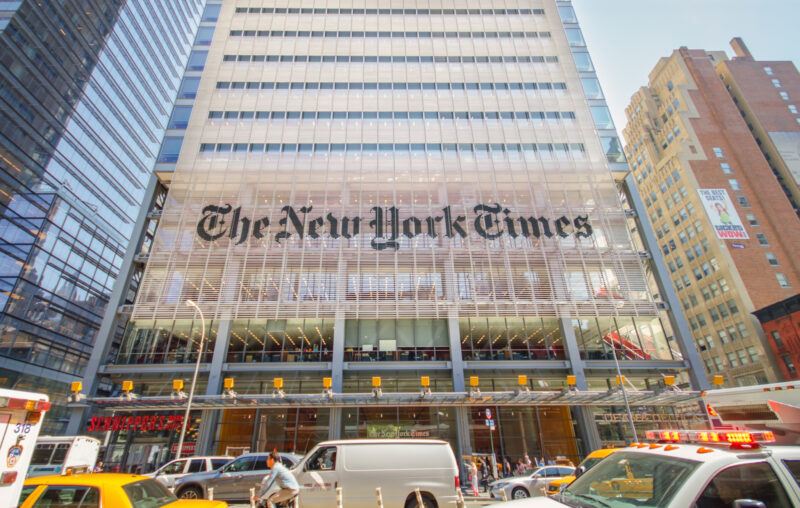 Once-venerable newspapers have increasingly become mouthpieces of the prevailing orthodoxy. While there is plenty wrong with that orthodoxy, the real problem comes when news is blurred with opinion. Indeed, there are plenty of fora for opinion pieces. Mother Jones and Jacobin are radically socialist, The New Republic more mildly so. The Economist is openly classical liberal. Fox News and The National Review are openly conservative. That’s fine. It can even be illuminating to read the same story in two different outlets.

The difficulty comes with partisan outlets that claim to be objective.

I focus here on The New York Times (although there are many others). It is helpful to start with the scathing resignation letter by former Times journalist Bari Weiss. She writes of a “predetermined narrative,” a “new orthodoxy,” and “an illiberal environment” – “a new consensus has emerged in the press, but perhaps especially at this paper: that truth isn’t a process of collective discovery, but an orthodoxy already known to an enlightened few whose job is to inform everyone else.”

One way to understand this is, of course, the elite’s terror at Donald Trump. It became their duty to stop him, rather than report the news.

But another way to understand the trend is a return to gonzo journalism.

Gonzo journalism emerged in the late 1960s, as part of New Journalism (see Tom Wolfe’s 1973 eponymous compilation, or his scathing critique of The New Yorker, reprinted in the 2001 compilation Hooking Up). In traditional journalism, the journalist is “invisible” and facts are reported objectively (Korda, 329-340). By contrast, gonzo journalism intentionally places the author squarely into the story. Facts become fuzzy, as the journalist’s involvement and subjective story-telling take center stage. Hunter S. Thompson explained gonzo in his 1971 Fear and Loathing in Las Vegas: A Savage Journey to the Heart of the American Dream. His assignment wasn’t clear, so he came up with his own: “But what was the story? Nobody had bothered to say. So we would have to drum it up on our own. Free Enterprise. The American Dream… Do it now: pure Gonzo journalism” (12). This is not objective journalism, nor is it intended to be. In the introduction to the 50th anniversary edition of Fear and Loathing, Caity Weaver (ironically, a writer at The New York Times), writes: “It is a sin in journalism to make things up. Yet a certain degree of subjectivity is calculated into the practice’s ultimate aim: to accurately communicate one’s honest perception of what happened under some circumstance.” Alas, several recent articles in the Times have simply made things up, in the tradition of gonzo journalism.

The first example comes from 2019, when the Times published a series of essays as the 1619 Project. They attempted to rewrite American history with slavery front and center, making hyperbolic claims including the preservation of slavery as the main cause for the American Revolution. While contrarian scholarship is healthy, the Project was based on inaccurate history, it was not led by a historian, and a new “truth” was simply asserted, because it fit the narrative. A few months after publication, several historians wrote to the Times, pointing out a number of inaccuracies; one letter concluded that the authors of the 1619 Project had engaged in “displacement of historical understanding by ideology.” But the gonzo Project fit the Times‘ narrative, so the newspaper stood behind it (although there were some shady alterations to the newspaper’s website, without open retraction). The Project received adulation from many media outlets and leftist politicians – and its leader received a Pulitzer Prize. Tellingly, the prize citation commended a “sweeping, provocative and personal essay for the ground-breaking 1619 Project” (emphasis added).

A second example: on March 16, 2021, a shooter killed eight massage therapists at suburban Atlanta massage parlors. The suspect explained that he was motivated by sexual resentment. But it was too late. Six of the eight victims happened to be Americans of Asian origin, so The New York Times had already instructed its readers to feel that these were racially-motivated attacks, fueling a national hysteria about anti-Asian discrimination. Honest journalism would have dictated a retraction or correction, but this did not fit with the narrative, so the Times simply doubled down on its gonzo journalism. Many other outlets and politicians followed suit; the narrative had been created, as the mainstream news outlets had “manipulated readers and viewers to be outraged.”

The final example of gonzo journalism moves from media to the academy, with Duke University Nancy MacLean’s historical novel, Democracy in Chains: The Deep History of the Radical Right’s Stealth Plan for America (2018). In this book, MacLean attacks economist James M. Buchanan and the Koch network – the narrative that brings everything together is, of course, racism, with a hint of oligarchy. I should note in passing that I don’t mind scholarly questioning of Buchanan and his Public Choice theory; I spent many enjoyable hours in graduate school analyzing Donald Wittman’s The Myth of Democratic Failure: Why Political Institutions are Efficient, among other critiques. After graduate school, I engaged in friendly battle with “idealist” conservative political philosophers. But MacLean’s gonzo style is not helpful. As a historian, she does not even attempt to engage with the economics of Public Choice. What is even more troubling is MacLean’s method of “speculative historical fiction,” which includes fabricated assertions presented as evidence, and speculative links with no foundation. This makes no sense, except if the work is understood as gonzo journalism; naturally, MacLean’s book fits with “the narrative,” so it garnered adulation from the usual suspects and a number of national prizes, despite the widespread criticism it received.

These are but three examples. It’s harder and harder to find good reporting, as the media is increasingly concerned with advancing a particular narrative, without concern for objectivity. Understanding it as gonzo journalism does provide a helpful heuristic.

This article, The Return of Gonzo Journalism, was originally published by the American Institute for Economic Research and appears here with permission. Please support their efforts.