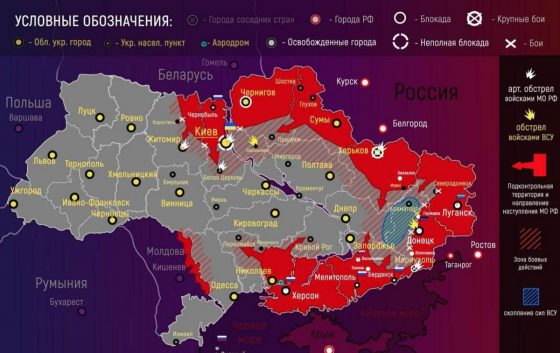 44 million people live in Ukraine, and they are deeply suffering in a war that most of them did not want.  Like most of us, the vast majority of Ukrainians just want to live their lives in peace and quiet, but that isn’t going to be possible now.  So we should pray for the people of Ukraine, because they are going through a type of hell that is beyond what most of us even have the ability to imagine.  And we should be very angry with all of those that caused this war, because it didn’t have to happen.

I want to be very clear about the fact that I do not support the Russian invasion of Ukraine.  The Russians could have achieved their goals without a full-blown invasion, but now they have started World War III.

I also want to be very clear about the fact that I place a great deal of the blame for this conflict on the global elite.  The Biden administration and other western powers encouraged Ukrainian President Volodymyr Zelensky to endlessly provoke the Russians and they made all sorts of promises to him.  So Zelensky pushed all of his chips into the middle of the table even though the Russians knew that the U.S. and Europe would not fight if they invaded.

Now Russia has called the bluff, and the U.S. and Europe have stayed on the sidelines.

They certainly don’t want to fight the Russians, but they have no problem encouraging the Ukrainians to sacrifice countless lives fighting a battle that they can’t possibly win.

Asking the Ukrainians to fight Russia is like asking a skinny 10-year-old boy to fight a 25-year-old heavyweight boxing champion.

It isn’t a fair fight.

Many Ukrainians have fought bravely for their country, and this has given the Russian military more problems than they originally anticipated.

But as Clint Ehrlich has pointed out, Russia’s early struggles actually make the possibility of any sort of a negotiated conclusion to this conflict must less likely…

But the humiliating struggles they’ve experienced, which have been broadcast around the world, change the political calculus.

Russia no longer has the option of looking like a magnanimous victor by accepting a negotiated ceasefire.

If President Putin accepts something like a conditional surrender that preserves the integrity of the Ukrainian government, that will be spun as a defeat for Russia.

It may sound paradoxical from the outside, but Russia’s *tactical defeats* now make *strategic victory* imperative.

To preserve Russia’s aspiration to be a superpower, there must be no doubt at the end of the war who the victor was.

It must be Russia. By a crushing margin.

Even if it takes longer than originally anticipated, Russia will undoubtedly win this war.

And more Ukrainians will needlessly die with each passing day.

Of course it was the U.S. and other western powers that set the stage for all of this.

In 2014, the Obama administration and other western powers were behind the color revolution which violently overthrew the democratically elected government in Ukraine.

That resulted in an extremely violent civil war between the new U.S.-backed government and the separatists which were backed by Russia.

Things were relatively stable during the Trump administration, but then the Biden administration started filling Zelensky’s head with all sorts of ideas about joining NATO and taking Donetsk and Luhansk by force.

And Zelensky bought into what Biden administration officials were telling him hook, line and sinker.

The Russians tried to negotiate, but Zelensky and the Biden administration steadfastly refused to compromise.

So the Russians felt like they were out of options, and now the Biden administration does not want to fight a war that they helped to cause.

And even though his country is now being destroyed, Zelensky is continuing to talk tough…

Ukrainian President Volodymyr Zelensky issued an address to the Russian people on Thursday, according to state media, in which he announced that Russia would pay “reparations” and rebuild “everything” the ongoing war has destroyed in Ukraine.

Precisely how does Zelensky plan to achieve that?

The tone of Zelensky’s speech on Thursday, as reported by the government news site Ukrinform, was significantly less conciliatory than his address to the Russian people last week shortly after Putin began a full-scale assault of Ukraine, in which he emphasized friendly relations between Ukrainian and Russian people and urged Russians to pressure Putin to stop the war. The shift in tone aligns with that of statements from Ukrainian outlets on Wednesday declaring that Russian soldiers would be “slaughtered like pigs” if they attempted to surrender. Ukrainian government social media outlets are actively encouraging civilians to make Molotov cocktails, build roadblocks, and otherwise participate in the war.

Instead of telling women and children to fight the war that they helped to cause, I would like to see Zelensky and his associates get out of the bunker and do some fighting themselves.

And I would also like to see Joe Biden, Kamala Harris, Antony Blinken, Jake Sullivan and other members of the Biden administration fly over to Ukraine and join the battle.

Of course the same thing applies to Vladimir Putin.  Instead of hiding in a bunker in the mountains, I would like to see him on the front lines.

Needless to say, none of these global leaders are actually going to participate in the fight.  They are way too important for that.

Instead, we are going to continue to see women and children face off against Russian tanks, and that is a disgrace.

Wouldn’t it be great if the international rules of war were changed to say that those that start a war must fight in it?

But instead of fighting for Ukraine, the global elite are attempting to put lots of pressure on Russia in other ways.  For example, all Russian-owned and bred cats have now been banned from international competitions…

An international cat federation has banned all Russian-owned and bred cats from competing in international competitions, in a move that’s sure to stop Putin’s attack on Ukraine.

No, this isn’t a Babylon Bee story.

The Fédération Internationale Féline (FIFe) issued a statement saying it “cannot just witness these atrocities and do nothing.”

Yes, I am sure that the citizens of Kiev, Kharkiv and Mariupol will be greatly encouraged when they hear that.

And as Ukrainian cities are pummeled by relentless shelling, the U.S. Army has decided that now is a great time to be “putting its soldiers through training on gender pronouns”…

While Russia wages a full-scale invasion of Ukraine, the U.S. Army is putting its soldiers through training on gender pronouns and coaching officers on when to offer soldiers gender transition surgery, according to an official military presentation on the subject obtained by the Washington Free Beacon.

The mandatory presentation, “Policy on the Military Service of Transgender Persons and Persons with Gender Dysphoria,” was given to officers earlier this month along with instructions for them to train their subordinates on the material. Portions of the presentation were provided to the Free Beacon by a whistleblower who was ordered to undergo the training as a high-ranking officer in the Army Special Forces.

As we sit in comfort here in the western world, major Ukrainian cities are being ruthlessly encircled by Russian forces.

Millions of Ukrainians will soon be very cold and very hungry as they are relentlessly shelled by the mighty Russian military machine.

But most Ukrainians never wanted any of this.  If anyone deserves such a fate, it is the global elite that actually caused this war in the first place.

For years, I have been relentlessly warning that we were heading toward a conflict between the U.S. and Russia, but most Americans weren’t interested in such warnings.

Now World War III is here, and the global elite think that they are going to be able to watch it from a safe distance.

But this won’t just be limited to Ukraine.

War is going to spread, and it will eventually deeply affect all of us.