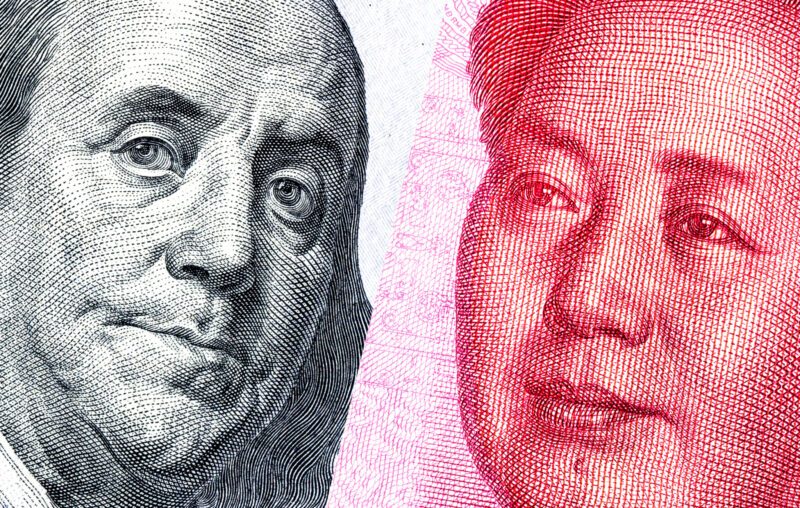 The recent dollar-denominated financial sanctions on Russia by the United States inadvertently highlight the growing significance of the yuan (RMB) as an alternative currency. Although today’s immediate concerns revolve around the potential for Moscow to avoid sanctions by transacting in RMB, the significance of the emerging US-China currency rivalry exhibits far broader implications. Many countries are reevaluating their commercial and strategic interests, including increasing their usage of the yuan. As a result, China’s effort to internationalize the yuan is seeing increasing success after six years of stagnation. If the US is to protect its position in the world financial order, it must uphold its sound institutions underpinning the world’s faith in the dollar.

At the beginning of January 2022, the Chinese yuan’s share of world payments hit a record high, as shown in the graph below.

Countries blacklisted by the US transact in the yuan, which supports China’s currency internationalization plans. For example, nearly half of North Koreans use the yuan for domestic transactions. Iran and Myanmar accept yuan-denominated purchases from China. After its ban from the Western financial system, Russia is now paying off its foreign debt in yuan. In all these cases, dollar-denominated sanctions pushed countries towards the dollar’s competitor, the yuan.

Other countries that maintain trade relations with the US are reconsidering dollars as their trade and investment with China increases. Saudi Arabia, a major oil supplier for the US and China, is considering a yuan-denominated oil deal with Beijing. In 2018, officials from 14 African countries discussed using the yuan as a regional reserve currency. A large impetus likely stems from their involvement in Beijing’s Belt and Road Initiative (BRI), a global economic program that seeks to reorient global commerce around China. In Zimbabwe, the yuan became legal tender after China canceled its debt. ASEAN, a Southeast Asian alliance, adopted bilateral currency swaps with China, which World Financial Review economist Dr. Kalim Siddiqui argues will be the “demise of the US dollar.” Indonesia signed a bilateral agreement to promote the yuan’s use. Baizhu Chen, a clinical finance and business economics professor at the University of Southern California, explains that such countries “feel their economies could be held hostage to US policies” and “want to diversify their risk.”

China also plans to reshape its payment system with the rollout of a digital yuan, or e-CNY. In response, members of Congress raised concerns over the digital yuan’s potential to circumvent US sanctions and threaten the dollar’s status as a reserve currency. In addition, the digital yuan can facilitate cross-border payments without SWIFT, a global interbank messaging system, undermining US interests and bolstering China’s financial power.

Be that as it may, China’s financial structures hinder the internationalization process. Tight capital controls limit convertibility making capital withdrawals out of China extremely difficult for its citizens and investors alike. Foreign businesses registered in China are also bound by strict foreign exchange regulations which delay or restrict business capital transfers. Capital account liberalization is the prerequisite to widespread currency usage, but Peterson Institute for International Economics researchers Nicholas Lardy and Patrick Douglass note that “China does not yet meet any of the conditions necessary for convertibility.”

The graph below shows that China’s progress lags in promoting the usage of its currency in global commerce. The RMB plateaued at just 2 percent of global transactions, whereas the US dollar still commands 40 percent of all transactions. For now, the dollar remains king.

What Do Countries Consider When Using a Currency

While sanctions may force some states to resort to yuan, most countries balance their use of RMB and USD based on their strategic and economic interests. For example, Japan holds a large percentage of its foreign reserves in US dollars despite China’s being its largest trading partner. African countries, which predominantly hold dollars and euros, might add the yuan to their portfolios to pay their Chinese infrastructure loans. In Southeast Asia, Cambodia receives large Chinese investments and displays interest towards the RMB to decrease transaction costs. However, Cambodia still pegs its own currency to the dollar.

The yuan’s political controls and difficulty of use in commerce explain these mixed results. China’s weak foreign money exchange infrastructure makes it inconvenient for cross-border transactions. Rolling out a digital yuan makes it easier to conduct international payments, but only if other countries establish interoperability with their financial systems. The USD also maintains its first-mover advantage, network effect, and reliability over the Chinese yuan.

Countries also tend to favor the reserve currencies of states with strong diplomatic and military influence, like the US. This tendency exists because states desire to transact in the currency that promotes national security and mutual monetary stability among alliance members.

An American security-dependent state often purchases Washington’s currency-denominated debt, such as US Treasury bonds. One study estimates that “military alliances boost the share of international units in foreign exchange reserve holdings by almost 30 percentage points.” Another study finds that countries lacking nuclear weapons hold 35 percent more US dollars in reserve than those that do not.

In the context of the US-China rivalry, countries are fundamentally realist in their currency choice. Nations favor economic utility until security concerns become apparent. For some countries aligned with the US, like Australia and Japan, a strong trade relationship with China is increasingly less relevant in the face of geopolitical tension. Countries often prioritize national security, alliances, and values over maintaining economic relationships when taking sides in a conflict.

Other states, like those in Southeast Asia and Africa, find themselves caught in the middle of a strategic balancing game. As the Chinese economy grows, most countries may hold a diverse portfolio of foreign currencies to hedge against uncertainty. A prime example of this rebalancing act is Israel’s central bank adding the yuan to its foreign currency reserve alongside three other currencies. The move comes as Jerusalem bolsters its trade relationship with Beijing and expands technology exports worldwide. Ultimately, the Israelis decreasing their ratio of dollars and euros while adding Chinese currency represents an objective observation about the shifting global balance of strategic and economic power.

Another factor that may be contributing to the yuan’s ascendancy is a global rethink on the foundation of the monetary status quo. The first Bretton Woods system sought to create a uniform global monetary system with currencies tied to the price of gold. After President Nixon took the US off the gold standard, however, Bretton Woods ceased to exist in its original form. As a result, the world transitioned to Bretton Woods II, a de facto system based on US Treasuries as the anchor. Now, analysts like Credit Suisse Managing Director, Zoltan Pozsar, predict the emergence of a Bretton Woods III backed by commodity prices.

Pozsar notes that a combination of loose monetary policy in the United States, surging commodity prices, and anxiety over the weaponization of the dollar are prompting countries to rethink their relationship with American currency. While the United States is sending Russian commodities into the ground with sanctions, China’s central bank stands to benefit by purchasing Moscow’s exports for a discounted rate. After the Russia-Ukraine war concludes, Pozsar predicts that the US dollar will emerge weaker and the RMB stronger and backed by commodities. As a result, reserve portfolios and currency-denominated transactions in Bretton Woods III are likely to be more diversified and dynamic than the status quo. This restructuring provides another opening for the yuan to gain prominence in international currency holding and usage.

Whether China’s currency will shave off a sizable portion of the dollar’s global usage is yet to be seen. Still, there is no doubt that the world is entering a new monetary rebalancing. But if China intends to establish currency dominance, it must develop trustworthy institutions, respectful diplomacy, and responsible stakeholdership in the international order. Whether Beijing possesses the capability to complete these objectives remains to be seen.

This article, The US-China Currency Rivalry: Choosing Sides, was originally published by the American Institute for Economic Research and appears here with permission. Please support their efforts.