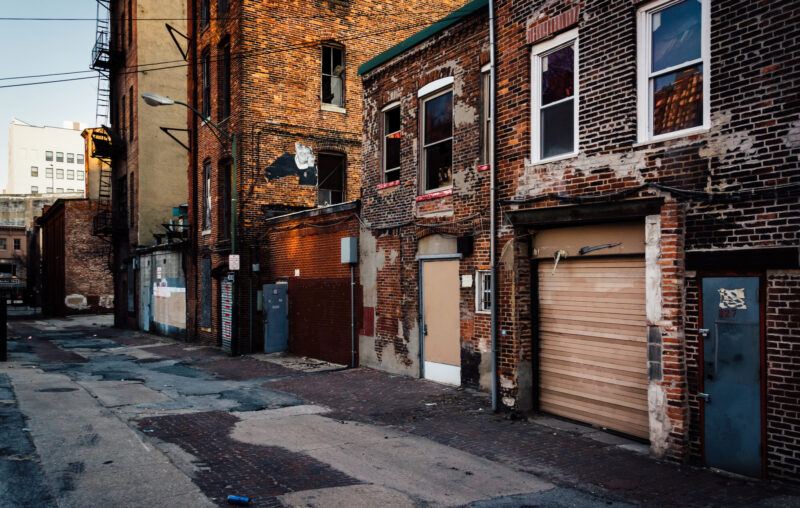 I had never even heard of HBO’s The Wire until it was already off the air, available only on DVDs. I quickly acclimated to its documentary-like style, and devoured all five seasons as quickly as I could. The series details the problems with Baltimore, and indeed with all of America’s dysfunctional larger cities. In so doing, it exposes the shortcomings of big government and thus lights the way forward, out of the current abyss of crime and poverty.

After that initial viewing, I watched The Wire completely through four more times, for the college course I developed around it and taught three times in the 2010s. I also watched once through all of the David Simon-produced cognates, including Homicide: Life on the Streets (Baltimore), The Corner (Baltimore), Treme (New Orleans), The Deuce (New York City), Show Me a Hero (Yonkers), and We Own This City (Baltimore).

The Wire first aired two full decades ago, so some younger viewers today might need a primer on some of the technology featured in it, like pagers. For the most part, though, the epic series has held up well due to strong storytelling, unforgettable characters like Omar Little, the gay robber of drug dealers, and riveting Public Choice plotlines.

Like any timeless drama, The Wire offers something for everyone. For the political economist, the series explains in graphic detail why Baltimore, like most large American cities, devolved into criminal chaos and despair and never rebounded. It begins with the most glaring symptom of the city’s woes, the illicit drug trade, before diving into more fundamental causal chains.

Drug dealers, druggies, and others in the drug “game,” The Wire shows, are human beings – beautifully ugly idiosyncratic lemmings, deeply flawed but also amazingly adaptable, intelligent, and resilient. Addicts like Bubbles steal and grift to get their daily dose of mind-altering medication; street dealers like Wallace sell to provide for their loved ones. Both become mere pawns in the machinations of drug kings who pay no taxes to the city but reward shady lawyers handsomely for their courtroom and money-laundering expertise.

But even the shady lawyers are effects rather than causes. Lock them away and other Saul Goodman-types fill the vacuum. The same goes for the international drug smugglers. Shut down smuggling through the port and “WMD,” “Pandemic,” and other drugs with colorful street brands come in by truck or rail instead. Altering the drug ecosystem, though, kills people, including druggies who overdose because the amount of heroin their dealer sells them changes. And bangers kill each other, and innocent bystanders, when turf wars erupt as the balance of power shifts to the gangs with the most reliable “connects.”

The Wire portrays the police as fallibly human too. Some police are bright, diligent public servants hellbent on catching the bad guys, at least as long as overtime pay flows. As they say, cases move from red (unsolved) to black (solved) due to the green (OT money). Other cops steal from the very people they are supposed to protect, while still other police are just brutal thugs with badges.

Radical innovators like Bunny Colvin get kicked out instead of kudos. Bunny tries to establish an open air drug market in a few mostly vacant blocks. Termed “Hamsterdam” by young dealers unfamiliar with Amsterdam, they term the slightly more literate Five-Oh running the zone use for their decriminalization experiment, the system works so well at reducing crime that the brass get suspicious enough to investigate. Instead of expanding the experiment, they shut it down and make poor Bunny fall on his sword. Leadership doesn’t literally put his head on a stick, but they do so figuratively, as a lesson for other freethinkers.

Many organizations do not really want change, they want money, or attention, so they never seriously consider transformative reforms. Baltimore’s dysfunctional school district constitutes a prime example. Federal regulations destroy any possibility of reforming that fiasco.

Foremost, the district receives full federal funding for any student who shows up for class just a few times before an arbitrary deadline each Fall. The district therefore hires ex-cons to cruise the streets looking for truants to seize and force into seats. Once the minimum for funding is met, though, the school doesn’t really want the truants to show up again because they are academically behind and often disruptive in the classroom. They are quite deliberately left behind.

Not that it matters much, because little occurs in Baltimore’s classrooms other than “teaching to the test” that also helps to determine federal funding. One math teacher, a failed police officer, breaks through with students by teaching them the elementary probability theory needed to clean up at craps, a popular dice game. But administrators force him to abandon his successful pedagogical techniques. Despite the teacher’s best efforts, and a whole lot of compassion and personal sacrifice, most of his students end up as drug addicts or criminals.

If The Wire makes one lesson crystal clear, it is that good intentions do not create good outcomes in any except the most cursory, temporary, or superficial ways. Against long odds, for example, Tommy Carcetti wins Baltimore’s mayoral election only to discover that he has almost no power to effect change due to competing special interest groups and serious budget constraints caused by fraudulent accounting, excessive police overtime, and continued deterioration of the city’s tax base.

The disjunction between the city government’s tax revenue and its perceived needs ultimately causes the city’s numerous problems. The series hints at the economic history underlying the start of the death spiral, the decline of Baltimore’s port and the city’s manufacturing sector. In perhaps the most poignant scene in the series, labor leader Frank Sobotka explains how Americans used to make and build things, but now they just put their “hands in the next guy’s pocket.” Soon after, international drug traffickers slit his throat and dump his body into the Chesapeake.

As companies and people fled the city, the former often overseas and the latter often to the Baltimore County suburbs, the tax take declined at the same time that the city needed, or thought it needed, more money for police, education, and various social programs. Insufficient funding of basic public services, like garbage removal, made large swathes of the city even less livable, leading to more population losses, and even less tax money coming in.

As the city began to spiral into kleptocracy, no effective outside force could check its descent. The once mighty Fourth Estate, The Wire explains, sank into a death spiral of its own. As the city’s population declined, subscriptions fell off, so newsroom cuts were made, making the Baltimore Sun less valuable to its readers, who canceled their subscriptions. So more cuts were made, and more subscriptions lost. Then the Internet came and even more people dropped their subscriptions. By the last season of the series, the once venerable Sun had become a laughingstock, unable to discern truth from the lies its reporters told chasing Pulitzers and new postings with the Washington Post.

In the end, The Wire offers Baltimoreans no hope, and statist policymakers no path forward. But surely a smaller city government would mean a better Baltimore.

There is no easy way to reverse the city’s downward spiral as long as the city’s government thinks it has to serve as every resident’s parent, helicoptering over them from cradle to (too often early) grave. If it were to cut taxes and city services drastically, however, people would move back in, served not by bloated bureaucracies but by private firms competing to provide security, garbage collection, schooling, prisoner rehabilitation, and the like, for the lowest possible quality-adjusted price. The city could still provide courts of law and a scaled-back police force and in the process stand some chance of improving both.

A good city government’s biggest purpose, though, would be to facilitate entrepreneurship, not to create barriers to business. If a factory or warehouse or whatever wants to move in, city officials should figure out how to make it happen, not how to tax and regulate it out of existence. The new business will help the city to thrive by providing employment, which will ensure that law-abiding citizens outnumber dealers and druggies.

Baltimore’s people, after all, are not born destined to lives of crime or drugs. They are simply more likely to wind up in one of those bad places if surrounded by it growing up. A few characters in The Wire manage to escape the drug game, but only after many hard experiences or some plain dumb luck. Most, though, end up dead, in prison, or disgraced. With less government and more opportunity, however, the real world does not have to forever imitate the art that it inspired two decades ago.

This article, The Wire Turns Twenty, was originally published by the American Institute for Economic Research and appears here with permission. Please support their efforts.