The Workhouse of the Early Court 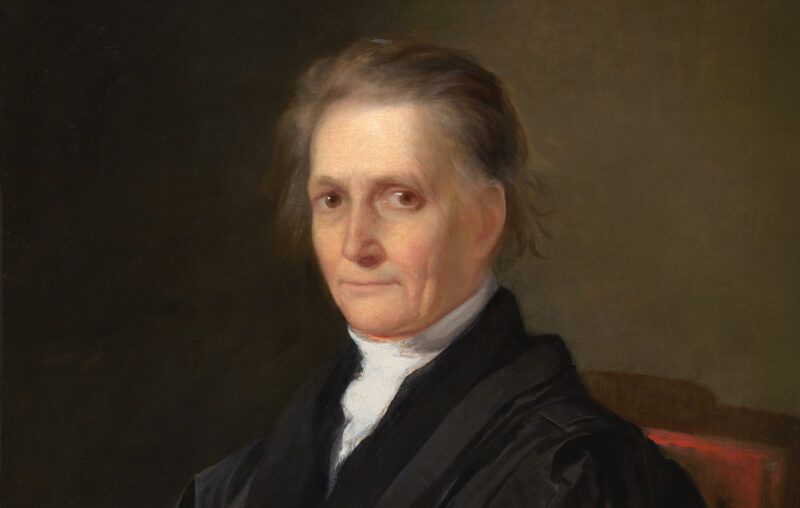 Academics often value brilliance over soundness. Brilliance is more interesting and exciting, even if soundness is what best makes society function. Thus, it is not at all surprising that when it comes to the early Court, almost all attention focuses on Chief Justice John Marshall and Justice Joseph Story. Marshall not only wrote the most opinions but pioneered the judicial soundbite. Story not only made the most creative use of precedent but his encyclopedic knowledge gave rise to the first treatise on our fundamental law, Commentaries on the Constitution of the United States.

In Washington’s Heir: The Life of Bushrod Washington, Professor Gerard Magliocca adds importantly to our understanding of the early Court by making a compelling and well-researched case that Bushrod Washington was the soundest of the early justices. In this quality, of course, he resembled his uncle George. Many of the Framers were more brilliant than he, but none had surer judgment. As Thomas Jefferson recognized, the first President never acted “until every circumstance, every consideration was maturely weighed.” His nephew, as described by Story, had the same characteristics: his “mind was solid rather than brilliant; sagacious and searching rather than quick or eager; slow but not torpid, steady, but not unyielding.”

Of course, the results of this soundness were not comparable to his Uncle, but that is a standard no one in American history can match. As Akhil Reed Amar has brilliantly argued in The Words that Made Us: Constitutional Conversations, 1760-1840, George was the person most responsible not only for winning the war that made America a nation but also for creating the Constitution that founded it. Nevertheless, from the evidence of this book, Bushrod was the most faithful conservator of that foundation among the early justices. He was devoted to understanding the text as enacted, and he resisted, as some of his more brilliant colleagues did not, the temptation to use the Constitution to create the optimal social policy according to his own lights.

Perhaps the best example of the justice’s self-constraint is Ogden v. Saunders, which concerned the question of whether states could change the law of contract prospectively (i.e., to contracts not yet entered into) through bankruptcy law despite the strictures of the Contract Clause. The Contract Clause prohibits by its terms any state from “impairing the obligation of contracts.” Washington focused on the word “obligation” to hold that the Contract Clause only protected past contracts and was no bar to regulating future ones. He bolstered this argument by noting that there were many laws at the time of the enactment that regulated future contracts. The framers could hardly have expected the Clause to have swept them away. (This reasoning considers the expected applications of the Clause and thus provides evidence that using expected applications was an original method of constitutional interpretation.) In dissent, Marshall, joined by Story, relied on arguments from natural rights, which they saw as background principles of the Constitution, contending that the Clause prevents regulation of future contractual relations.  As Magliocca recognizes, their arguments are forerunners of the liberty of contract argument in Lochner. Washington rightly takes the more legally grounded, less abstract view of the Clause.

Washington took this consistent textualist view throughout his tenure. Another case that shows the jurisprudential difference from his more famous colleagues is Green v. Biddle. There the issue was whether the Kentucky legislature could enact a statute that required absentee landlords to compensate tenants for any improvements made during their tenancy.  In the first hearing at the Supreme Court, Story ruled for some Virginian plaintiff landlords, but cursorily and only on nebulous grounds, invoking “general principles of law” and “first principles of justice.” The decision was controversial and a rehearing resulted. In that rehearing, Washington rendered the final decision on a much more concrete and textualist basis. Washington noted that when Virginia had granted Kentucky’s independence from its own sovereignty and thus its admission to the union, it had entered into a compact by which Kentucky had promised to honor existing property rights. This compact was a contract within the meaning of the Contract Clause and thus Kentucky could not violate it by eroding the Virginia landlords’ property rights.

Another of Washington’s textualist opinions resonates even today. The single most famous case in federal civil procedure is Erie v. Tompkins, in which the Supreme Court in 1938 held that the federal courts sitting in diversity jurisdiction—that is cases where citizens of different states sue one another—must apply state law rather than a federal common law in rendering their decisions. But many scholars argue this view is contrary to the original settlement, largely because the opposite view—that the federal courts can fashion their own national common law in diversity cases—was that of Justice Story in Swift v. Tyson. Before Erie, it had been the law for over a century.

But Magliocca introduces to this debate Justice Washington’s opinion written on circuit in Golden v. Prince. There, Washington said it was against the provisions of the Constitution for federal judges to override the laws of the state in diversity cases.

Again Washington seems to me right in his conclusion. The Constitution’s Supremacy Clause displaces state law only by way of statutes, treaties, and the Constitution itself. Federal common law is none of these. But until Magliocca’s recovery of the opinion, Washington has gotten little, if any, credit for this insight, and Swift has wrongly been taken as the sole gospel about federal common law in the early republic.

One of Magliocca’s major themes is that Washington had far more influence on the Marshall Court than his signed opinions would suggest. He argues that the Marshall Court was all about teamwork. The justices lived and dined together and put a high premium on coming to a consensus to bolster the fledgling Court against political hostility. According to Magliocca, Marshall, as Chief, and Story, as the most learned, were most often the spokesmen, but their opinions reflected substantial input from their brethren. For instance, Magloccia shows that an opinion by Story in Terrett v. Taylor echoed the language of a memo Washington had written before coming to the Court. There he had disapproved of a Virginia law that tried to expropriate land belonging to the Episcopal Church. Story followed his reasoning without providing Washington any credit.

Magliocca’s work here raises a historically important question about the early Court. How much of the opinions of Marshall and Story, who wrote the lion’s share (and almost all of the most important ones), did the two draft on their own? Magliocca says we will never know because we have only the final published opinions and no drafts. Here I disagree. Because of Magliocca’s excellent research, I believe the National Institutes for the Humanities or some other worthy organization should fund a textual analysis of the Marshall Court’s opinions. Just as computers can generally tell who wrote what portions of co-authored literary and historical texts, including, for instance, the anonymously published Federalist Papers, they should be able to do the same for early Supreme Court opinions.

Judicial biographers generally face a problem: the very qualities that make someone worthy as a jurist—an instinct for caution, a life given over to mind rather than action, and a probity to avoid personal controversy—make for a life devoid of exciting incidents. Washington largely fits this mold, but fortunately for the interest of Bushrod’s biographer, his personal life was also dominated by one very notable fact: He was George’s nephew and heir.

When young, Bushrod is shown to be always at the great man’s beck and call. Even after George’s death and Bushrod’s elevation to the Court, much of his personal life is lived in his shadows. He must make decisions about George’s papers. He inherits Mount Vernon and must figure out how to live at what is already becoming a national shrine. One senses that being the nephew of the father of the nation was a heavy burden.

In one important act, he fell far short of George’s heroic legacy. At a substantial cost to his estate, George manumitted his own slaves and even paid for their upkeep. This was a final selfless act by which he intended to send a last message to his country. Bushrod was President of the American Colonization Society which was dedicated to freeing slaves, even if it also insisted on paying their way to Africa. Yet Bushrod not only failed to free his own slaves at his death, but also broke up enslaved families during his life, for which he received deserved rebuke from some in his own state.

Magliocca sets out these sorry facts, but he might have explored more the changing social context that could explain, though not excuse, Bushrod’s deviation from the actions of the most illustrious ancestor who was daily on his mind. One difference is that Washington, like many of the Framers, thought that slavery was destined for extinction. But shortly before Washington’s death, the cotton gin was invented and slaves began to become more valuable. Perversely, banning their importation made slaves already in the United States more valuable still. By the end of Bushrod’s life, following his uncle’s virtuous example was rarer and had a far higher price. That probably would not have deterred George, but even though he was a Washington, being far less famous, Bushrod did not weigh as much the national significance of his every act. It remains the great blemish on what, on this evidence of this biography, was superb service to the nation.

Magliocca has himself provided superb academic service in bringing to life a figure who is largely forgotten but for his famous surname and showing his contemporary relevance to some of our own important legal debates.

This article, The Workhouse of the Early Court, was originally published by the American Institute for Economic Research and appears here with permission. Please support their efforts.