They Are Hypocrites That Preach ‘Tolerance’ For Everyone – Except For The Groups That They Really, Really Hate 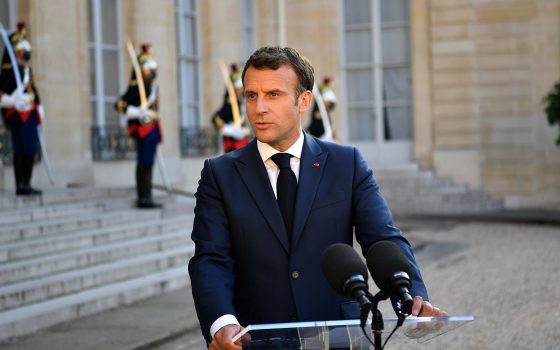 If you are a global leader, millions upon millions of people are deeply affected by the public statements that you make.  So when you are in such a position, it is absolutely imperative to be incredibly careful with your words.  Unfortunately, prominent politicians all over the globe are increasingly spewing hatred for certain groups even as they pretend to be champions for “tolerance”.  When ordinary citizens hear such hateful statements, many of them inevitably come to the conclusion that it is okay to hate those groups too.  Nearly a century ago, the Germans gave us a prime example of where this sort of hatred can ultimately lead, and we never want such a thing to ever happen again.

Let me give you an example of what I am talking about.  In a recent interview with a French newspaper, Emmanuel Macron referred to the unvaccinated as “non-citizens”, and he stated that it was his goal “to piss them off”…

Macron made the comments in an interview with the Le Parisien newspaper, noting “As for the non-vaccinated, I really want to piss them off. And we will continue to do this, to the end. This is the strategy.”

What a terrible thing to say.

So precisely how does he plan to “piss them off”?

Well, he apparently intends to limit the ability of unvaccinated people to live a normal life “as much as possible”…

He further vowed to keep “putting pressure on the unvaccinated by limiting, as much as possible, their access to activities in social life.”

What do you think would happen if Macron made that statement about a racial minority or the LGBT community?

But because it is open season on the unvaccinated, Macron can get away with saying whatever he wants about them.

And this is a signal to the rest of the citizens of France that they are free to hate the unvaccinated as well.

Of course Macron is far from alone.

Last year, Canadian Prime Minister Justin Trudeau said things that were even worse about the unvaccinated…

“They don’t believe in science/progress and are very often misogynistic and racist….This leads us, as a leader and as a country, to make a choice: Do we tolerate these people?”

There is absolutely no evidence that the unvaccinated are any more “racist” than the general population of Canada.

But this is what you do when you deeply hate a particular group of people.  You demonize them so that others will hate them as well.

You can almost feel the hate coming through in Trudeau’s words.  Canada was once known as a mecca of politeness, but under Trudeau it is being transformed into an incredibly hateful place.

Personally, I believe that we are called to go far beyond just “tolerance”.  In fact, as I have warned repeatedly, if we don’t learn to love one another we are simply not going to make it as a society.

But we can love others and still deeply disagree with the bad things that they do.

And that includes when those that we disagree with choose to be incredibly hypocritical.  Democrats in Congress love to tout the virtues of masks and mandates, but many of them also love to vacation in the state of Florida…

Democratic congressman Eric Swalwell appears to be following in the footsteps of fellow liberal Alexandria Ocasio-Cortez by taking a trip to mask-and mandate-free Florida – just days after lashing out at Republicans for ‘prolonging’ the coronavirus pandemic.

The California Democrat has repeatedly accused conservative lawmakers of being responsible for the ongoing covid wave and last week blamed the GOP for ‘canceled vacations’ and for having to wear ‘masks everywhere’ again just before the new year.

Since Swalwell is so “pro-mask”, he surely must have kept his mask on the entire time he was vacationing in Florida, right?

Actually, he didn’t.  In fact, he was photographed having quite a wonderful time without a mask at a luxury hotel in Miami…

But Swalwell, himself was apparently able to go ahead with his holiday travel plans and ditch his mask just days later, when he was spotted hanging out at the posh Loews Miami Beach Hotel.

So does this mean that we should hate Swalwell, AOC, Joe Biden and the other hypocritical politicians in Washington?

I know that it isn’t easy, but we need to love everyone, and that even includes our Congress critters.

But does that mean that we should accept the way that they are behaving?

Those that are responsible for destroying our society should be held accountable for their actions.

But we can hold our leaders accountable for what they have done without hating them.

Let me try to end this article on a different note.

Earlier today, I learned that one of the main ways that authorities around the nation are now tracking the spread of COVID is by testing raw sewage.  The following comes from NBC News…

With at-home Covid-19 tests in high demand and their efficacy in question, health departments from California to Massachusetts are turning to sewage samples to get a better idea of how much the coronavirus is spreading through communities and what might be in store for health care systems.

Recent wastewater samples in Houston, for example, show that there has been a sharp increase in the amount of the coronavirus detected in the city’s sewage. As of Dec. 20, Houston’s viral load, or the amount of virus found in samples, was at 546 percent compared to July 6, 2020, and the positivity rate was at 14 percent, according to the city Health Department’s wastewater dashboard. The viral load is up from 142 percent last week and 76 percent the previous week.

I don’t know about you, but all of this sounds like a load of crap to me.

As Omicron continues to spread, the level of fear all over the globe is only going to increase.

And as Yoda once astutely observed, fear leads to anger and anger leads to hate.

We have gotten to a point where prominent leaders all over the planet are openly spewing their hatred for the unvaccinated everywhere they go, and the mainstream media is totally letting them get away with it.

That makes this a very dangerous time for the unvaccinated, because history has shown where this sort of unbridled hatred can ultimately take us.