This Is What a Good University President Looks Like 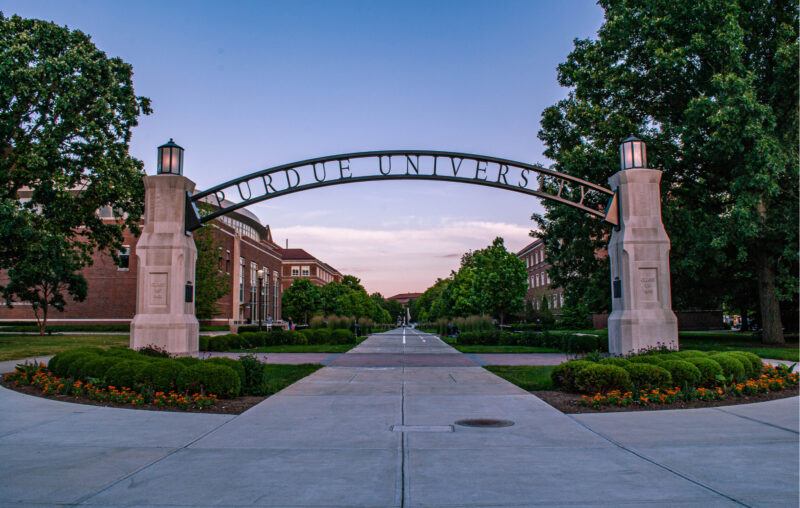 While American higher education often is rightly condemned for being inefficient, non-innovative, and resistant to change, there are exceptions, and there are some collegiate entrepreneurs whose success is worthy of commendation and emulation. To me, the top award for American higher education innovation must go to Mitch Daniels, who is just beginning his tenth year as the president of Purdue University.

I had a nice chat with President Daniels the other day. At the beginning, I reminded him how we first met: I visited him in his office as Governor of Indiana in late 2012, shortly before beginning his tenure as Purdue’s president.

Daniels wanted to talk about the compensation package for Purdue’s president, and rather than wanting me to provide clever arguments why his salary should far exceed that of his predecessor, he said he was willing and even eager to take a reduction in the presidential salary–as long as he could earn performance bonuses for doing a good job running the Boilermakers. I said to my sidekick with me at the interview (Anthony Hennen), “he will be an unusual college president.”  For once, an economist (me) forecasted correctly!

The measurement of academic outcomes is seldom straightforward, so Daniels and I talked about the problems with using such indicators as attrition (dropout) rates (a statistics that can be superficially improved simply by lowering academic standards), magazine rankings, financial reserves, enrollments (which likewise can be temporarily increased by lowering standards, likely harmful in the long run), outside research grants received, student outcomes on standardized tests,  etc.

Daniels is not only competent but kind and considerate: I once ate breakfast with Mitch at the tony Four Seasons Hotel in Washington when he suddenly got up and started helping understaffed employees bus tables!

Nine years later, Mitch Daniels lives up to his billing. At a time of stagnant national enrollments, Purdue’s are booming, at record highs. Student quality is rising.  A remarkable tuition freeze has lowered the inflation-adjusted cost of Purdue by over 20 percent, making it the bargain school in the Big Ten.

He realized higher education’s (including Purdue’s) weaknesses, getting out of activities that Purdue did not do particularly well, ones outsiders could do better and cheaper. For example, Purdue used to run a transportation service, buses to get students around the spacious campus–he ditched that, turning the job over to private providers who were transportation experts. Similarly, as he told me “We did not do online education particularly well.” So he went out and bought Kaplan, a major for-profit provider (for one dollar!) letting it morph into Purdue Global, today educating nearly as many students as attend the main campus in West Lafayette.

Although somewhat constrained by laws and finances, Daniels has started to change the way students pay for college. Mitch correctly thought it strange that relatively financially unsophisticated teenagers amass large amounts of debts to pay for college, rather than sell equity (stock) in themselves, so he has started an Income Share Agreement plan at Purdue that has attracted an increasing number of students who contract to have their tuition (or part of it) at Purdue paid for while attending school in return for giving up a percentage of their postgraduate earnings.

For all the purely economic successes Purdue has mounted (running budget surpluses every year, for example), Daniels seems to agree with something I feel: when he started at Purdue in 2013 the key problem in higher education was affordability and rising costs. Today, equally important is the threat from a breakdown in intellectual diversity–robust debates on the direction society should be moving. Purdue was a very early pioneer in adopting the Chicago Principles favoring unfettered and robust debates on campus on hot button issues. No Cancel Culture or Wokeness at Purdue.

Daniels has also emphasized expansion in the STEM (science, technology, engineering, and math) areas. Purdue’s historic reputation was that of a good engineering school, and the nation needs more scientists, engineers, and computer gurus. Purdue is pouring new resources into those areas. Although he did not say it, I suspect that he is content on having cross-state rival Indiana University excel in, for example, music composition, vocal performance, or journalism. He appropriately seems gratified that Purdue is riding a wave of high demand for scientists.

We talked about being a university president. I observed that several other Big Ten schools had actually ousted their presidents in the last decade or so–Penn State, Michigan, Michigan State, and Ohio State come to mind. He commented that with just nine years tenure at Purdue, he now had the greatest seniority of all Big Ten presidents.

Why don’t presidents stay around longer? Is it the pressure of the job? Without complaining, President Daniels acknowledged that the job of being a college president is not an easy one, requiring skills in a multiplicity of areas. Although he is 72, he seems to have no immediate plans to retire: the job is often challenging but always interesting and occasionally even fun.

Never one to rest on his laurels, Daniels has pushed Purdue into some new areas, including opening a new polytechnic college that caters to non-traditional post-secondary students benefiting from a more hands-on approach to learning. Mitch acknowledges the need for good quality shorter vocational certificate programs training students to, say, drive a long-distance truck, learn how to weld, or become a computer coder.

He is not a “college for all” president, and freely acknowledges that appropriate learning experiences vary considerably from individual to individual. Indeed, unlike the arch-typical president, he does not constantly badger the state government that he once headed for money, noting that inflation-adjusted appropriations from the state of Indiana have not risen during his presidency–but he is not angry about it, observing that there are many pressing needs for funds besides higher education.

Mitch Daniels, of course, is not alone in being dynamic, entrepreneurial, and generally successful in a higher education setting. For example, the granddaddy of all university presidents, Gordon Gee, has run five universities (now West Virginia University) for well over four decades with great competence and verve. Michael Crow has built Arizona State University into something of a national powerhouse, with an aggressively successful online presence.

The great master at online learning, however, may well be Paul LeBlanc, who has taken the sleepy University of Southern New Hampshire and made it a major presence in online education. And waiting in the wings to demonstrate his special qualities: Pano Kanelos, president of the new University of Austin that wishes to instill and enhance intellectual diversity at that institution, following a stint at the uber-traditional Saint John’s.

I used to believe that great University presidents had to have lots of experience doing what universities do best–teach truly “higher education” while expanding the frontiers of knowledge. Mitch Daniels shows that is not always true. Mitch went to great private schools–Princeton and Georgetown, and witnessed academic excellence, but he also honed his skills working for many years at a private company (Eli Lilly) and through government service (including  being U.S. budget director as well as a governor.)

There are a lot of mediocre people and ideas contributing to American universities being excessively costly, with too little learning and vocational relevance, and a disturbing contempt for a diversity of ideas to challenge student minds. But there are also the leaders like Mitch Daniels who are striving to have America maintain and expand its higher educational exceptionalism in the decades ahead.

This article, This Is What a Good University President Looks Like, was originally published by the American Institute for Economic Research and appears here with permission. Please support their efforts.

‘Everything is up but our wages’: Airport and airline workers speak out worldwide about ‘ridiculous’ conditions