Trade, Raid and the State Against First Nations 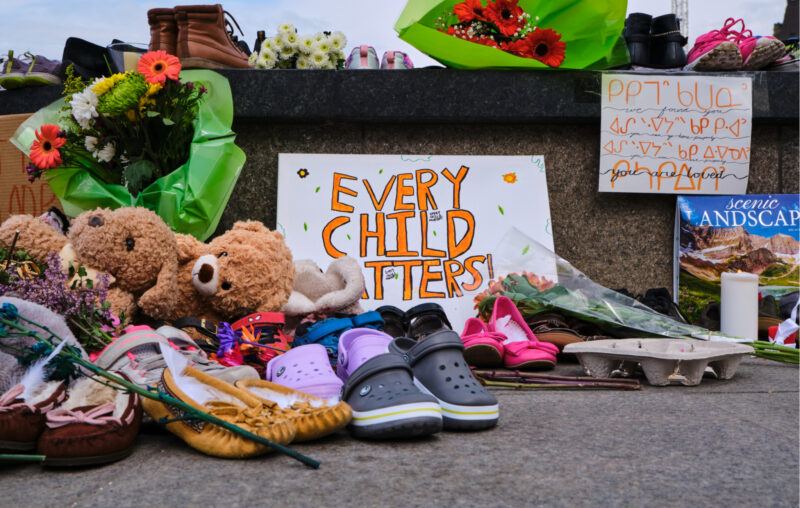 Indian residential schools are a particularly dark stain on Canadian history. A network of mandatory boarding schools funded by the Canadian government early after Canada came in 1867, residential schools had a simple goal: assimilate the First Nations of Canada by removing children from their families. To say that First Nations children fared poorly in those schools would be an understatement. Violence, sexual abuse, mistreatment and undernourishment (sometimes deliberately accomplished) left long-lasting scars in addition to high (relative to other Canadians) rates of childhood mortality.

While this was not a hidden aspect of Canadian life, awareness of the topic increased during the 1990s. In 2008 a truth and reconciliation commission led to public apologies on behalf of Canada’s federal government.

A few days ago, just before Canada Day (July 1st, the date marking Canada’s accession to dominion status in 1867), hundreds of unmarked graves were discovered on the grounds of former residential schools. This sparked many pundits to state that this year’s holiday should be used as a moment for remembrance and contrition. Others, including more radical left-leaning pundits, have gone further and called for the cancellation of all festivities. For these radical figures, the system of residential schools is the prime example of the abuse of First Nations by European settlers. Obviously, in these contentious times, more conservative pundits (including the leader of the official opposition) have rejected such calls and pointed out that there is a need to fight against a prevailing cancel culture.

In the heat of the discussion, however, many have lost track of a key fact about residential schools: these schools were mandatory state-funded schools. The federal government acted as an advocate for settlers to the Canadian Prairies and disregarded the natural rights of individuals from First Nations. It was by government fiat that these abuses were sanctioned and conducted.

But what would have happened if the settlement of Canada had occurred with a smaller state presence? Would there have been fewer abuses of the rights of First Nations? In an article with Rosolino Candela (published in Public Choice) and in a working paper with Louis Rouanet, I argue that the relations between settlers and natives were essentially peaceful in settings with limited state involvement.

To make this argument, there are three key facts to acknowledge:

First, if one compares the frequency of violent clashes between settlers and natives in Canada and the United States, one finds a strong pre-1867 contrast. Before they became citizens of an independent polity, Canadians were less frequently engaged in violent conflicts with First Nations than Americans were. More importantly, whereas the United States exhibited rising levels of violence from the end of the Revolutionary War onwards, there was no such trend in Canada.

Second, it is only after 1867 that patterns of settler-native relations in Canada begin to imitate those observed in the United States.

Third, and most importantly, important forms of ethnogenesis (i.e. the formation of new ethnic groups) were observed in pre-1867. In Atlantic Canada, during the 18th century, the French settlers in the Minas basin (roughly 15,000 individuals known as the Acadians) intermingled with the native Mi’kmaq of the region to the point of adopting numerous cultural features (notably mixing French with Mi’kmawi’simk). Relations between the Acadians and Mi’kmaq have been deemed “exceptionally peaceful.” On the Canadian Prairies, during the 19th century, French and English fur traders intermixed with natives from different nations and formed a separate ethnic group known as the Métis. This latter group developed a syncretic language, Michif, which mixed verbs used by members of the Cree nation with French nouns.

Why are these facts important? Because the examples I mention exemplify eras in which trade was privileged over raid. The Acadians were known as the “White Indians” who acted as intermediaries in the fur trade between the Mi’kmaq and other European settlers (notably those in New England). This crucial role as an intermediary meant that they had to commit explicitly to respect the rights of the Mi’kmaq. The Acadians succeeded in doing so by constraining their settlements to reclaimed marshlands that did not infringe on migration routes and hunting grounds of the Mi’kmaq. The Métis acted as provisioners to the settlers of the Red River and to the trading posts of the Hudson Bay Company. They were also key organizers of the buffalo hunting parties to meet the growing demand for buffalo robes.

When trade was privileged over raid, relatively peaceful outcomes emerged. So how did trade come to be privileged over raid in these two examples? Because both settings occurred in situations of relative statelessness. Indeed, peaceful cooperation and coexistence emerged when states were trivial actors (if not entirely absent ones). Without a potent state in play, those who would have preferred raid over trade had to shoulder the cost of violence. The costs could not be relegated to a greater polity. In other words, settlers to the hinterland could not ask taxpayers of the populated core to pay for sending troops to expel First Nations. Facing the full burden of violence, European settlers and traders saw trade as more advantageous than raid.

It is a testimony to this simple element of economic theory that once states stepped in, relationships rapidly soured and violence surged. In the case of the Acadians, the British deported the French settlers in 1755 and privileged the settlement of (subsidized) British farmers, instead supported by a much stronger government in the city of Halifax. With a well-organized state supporting them, settlers in the region began to trespass on Mi’kmaw (the singular of Mi’kmaq) lands especially as colonial governors and legislatures sided universally with settlers. The British often reneged on promises made to the Mi’kmaq and they began to regulate their economic activities, notably through price and place-of-sale regulations that were enforced by military authorities. The Mi’kmaq population fell rapidly from that point on.

In the case of the Métis, the story is roughly the same. After Canada was granted political autonomy in 1867, the new federal government saw it as its mission to populate Western Canada with European settlers. With support from the federal government (who even sent troops to quell uprisings by the Métis), settlers frequently felt safe enough in violating the property rights of the Métis. Gradually, the Métis began to assimilate for fear of government discrimination.

Once one understands these examples and how incentives shaped the propensity to trade rather than raid, one is forced to reflect differently upon the debates over remembrance. After all, these examples speak to cases of when peaceful coexistence was achieved. If the goal of remembrance is contrition, I see no better way than remembering how peaceful cooperation was secured and how it ended.

This article, Trade, Raid and the State Against First Nations, was originally published by the American Institute for Economic Research and appears here with permission. Please support their efforts.