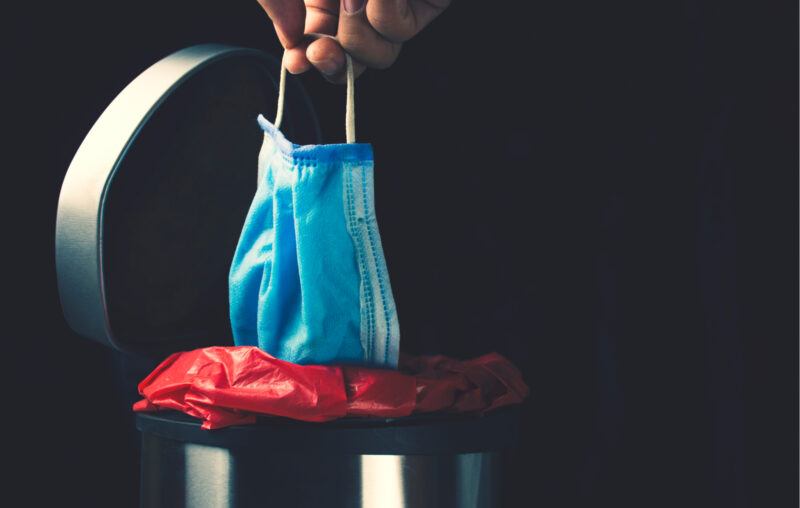 After two years, the extraordinary government measures—federal, state, and local—taken in response to the COVID pandemic, some of which were supposed to be temporary, have finally begun to abate, along with the fear and panic that inspired them. In hindsight, many Americans are now questioning the wisdom and necessity of school closings, business shutdowns, bans on public activities (including religious worship), mask and vaccine mandates, and similar edicts, which caused incalculable harm to the economy, our children’s education and development, and to the fabric of a free society. Australia and Canada are sad examples of the damage authoritarian policies can inflict on even democratic governments with a commitment to the rule of law if “emergency powers” are abused.

In the United States, the public was surprisingly tolerant of drastic precautions deemed necessary by public health authorities (a topic I addressed last year), but at long last Americans’ patience is wearing thin; COVID fatigue has set in. In most areas, state and local “emergency” measures—including lockdowns and mask mandates—have been relaxed or eliminated altogether, and some state legislatures have moved to restrict the executive’s “emergency” powers in the future. Yet many federal dictates remain in place. State attorneys general have begun filing lawsuits challenging the legality of sweeping restrictions on liberty, particularly those imposed by administrative agencies without clear legislative authorization. The tide may be turning in favor of pre-COVID normality. A new lawsuit is aimed at mandatory face masks on airplanes and in airports.

On February 16, a Texas congresswoman, Beth Van Duyne (R-Irving), and the State of Texas filed a federal court lawsuit challenging the authority of the Centers for Disease Control and Prevention (CDC) to enforce mask mandates for passengers using public transportation and hubs in the U.S., including air travel and at airports. (The CDC’s mask mandate also includes rail travel, buses, ships, subways, taxicabs, and rideshares.) The lawsuit, similar in concept to the pending legal challenge to employer vaccine mandates by the Occupational Safety and Health Administration (OSHA), in which the vaccine mandate was stayed, alleges that the CDC lacks statutory authority to make or enforce regulations that amount to a blanket preventative measure.

In National Federation of Independent Business v. Department of Labor, the Supreme Court held, 6-3, that OSHA improperly issued a blanket vaccine mandate for 84 million employees. OSHA, which regulates occupational safety for employers with 100 or more employees, issued its vaccine mandate as an “emergency” measure rather than by formal rulemaking subject to notice and comment. While Congress granted OSHA the authority to issue temporary “emergency” rules in certain situations, that authority is extremely limited and had only been exercised nine times previously, and fully upheld only once. OSHA’s emergency rules must be based on a showing that “employees are exposed to grave danger from exposure to substances or agents determined to be toxic or physically harmful or from new hazards.” In a per curiam opinion, the Court concluded that COVID-19 was not a workplace hazard, and that the “emergency” vaccine mandate likely exceeded OSHA’s statutory authority:

Administrative agencies are creatures of statute. They accordingly possess only the authority that Congress has provided…. Although COVID– 19 is a risk that occurs in many workplaces, it is not an occupational hazard in most. COVID–19 can and does spread at home, in schools, during sporting events, and everywhere else that people gather. That kind of universal risk is no different from the day-to-day dangers that all face from crime, air pollution, or any number of communicable diseases. Permitting OSHA to regulate the hazards of daily life—simply because most Americans have jobs and face those same risks while on the clock—would significantly expand OSHA’s regulatory authority without clear congressional authorization…. It is telling that OSHA, in its half century of existence, has never before adopted a broad public health regulation of this kind—addressing a threat that is untethered, in any causal sense, from the workplace.

Thus, the Court reinstated the stay pending further litigation in the courts of appeal. The reasoning of NFIB v. Department of Labor strongly suggests that COVID-19 does not warrant an agency’s assertion of authority beyond plain statutory limits. The Court concluded: “Although Congress has indisputably given OSHA the power to regulate occupational dangers, it has not given that agency the power to regulate public health more broadly. Requiring the vaccination of 84 million Americans, selected simply because they work for employers with more than 100 employees, certainly falls in the latter category.”

The CDC’s mask mandate for travelers using public transportation services or facilities was first issued in January 2021, in the form of an order from the U.S. Department of Health and Human Services, which oversees the CDC. The order remains in effect indefinitely, until “modified or rescinded,” and is enforceable by fines and criminal penalties. The CDC declined to adopt the mask mandate as an administrative regulation, subject to public notice and comment, on the ground that “emergency action” was justified by the need to prevent the transmission and spread of COVID-19.

The mask mandate applies to all travelers over the age of two regardless of vaccination status, infection status, or previous recovery from COVID-19, except for those unable to wear a mask due to disability or for workplace safety reasons. The order requires “conveyance operators” (such as airlines) and “operators of transportation hubs” (such as airports) to enforce the mask mandate.

The plaintiffs contend that the order is unlawful because the CDC lacks authority to issue blanket rules, citing several bases for its overbreadth: the order purports to be applicable to “people who may or may not carry infectious disease;” it was issued without a prior determination that the state health authorities are insufficient to prevent the spread of communicable diseases; and the order is not limited to preventative measures regarding property or cargo.

The complaint also alleges that the CDC’s order amounts to the exercise of legislative power by the executive branch in violation of the nondelegation doctrine. The lawsuit, filed in the Fort Worth Division of the Northern District of Texas, will be heard by Judge Reed O’Connor, an appointee of President George W. Bush who in 2018 ruled that Obamacare was unconstitutional, in a case brought by Texas and 17 other states. The Fifth Circuit upheld O’Connor’s decision, but in 2021 the Supreme Court in California v. Texas determined that the states lacked standing to bring the action. Texas liberals have expressed consternation at O’Connor’s willingness in prior lawsuits to rule against various Obama administration policies.

Representative Van Duyne, whose district encompasses Dallas/Fort Worth airport, alleges that she frequently travels on commercial flights as an elected member of Congress, is required to wear a mask while on flights and at airports, and would choose not to wear a mask if not required. Texas Attorney General Ken Paxton, suing on behalf of the State of Texas, stated that “President Biden cannot continue governing through executive edicts. Now is the time to strike down his administration’s air-travel mask mandate.”

This lawsuit seemingly has all the ingredients required for a successful outcome: an issue very similar to one that prevailed in the Supreme Court (in the OSHA case), a favorable forum (in both the district court and the Fifth Circuit, one of the nation’s most conservative appellate courts), experienced and capable lawyers (at both the Texas Office of Attorney General and Texas Public Policy Foundation), a plaintiff with standing, and a political climate trending away from the hysteria that motivated many of the hasty, overbroad measures early in the pandemic.

The only factor that could derail this lawsuit would be the CDC’s rescission of the order, which would be a victory in itself. Pass the popcorn. The nanny state is on the run.

Disclosure: The Texas Public Policy Foundation is representing Rep. Van Duyne in this case. In an unrelated lawsuit, I was represented by TPPF and General Counsel Robert Henneke.

This article, Unmasking the Nanny State, was originally published by the American Institute for Economic Research and appears here with permission. Please support their efforts.