US Celebrates Alliance With Seoul: But Is South Korea Worth a Nuclear War? 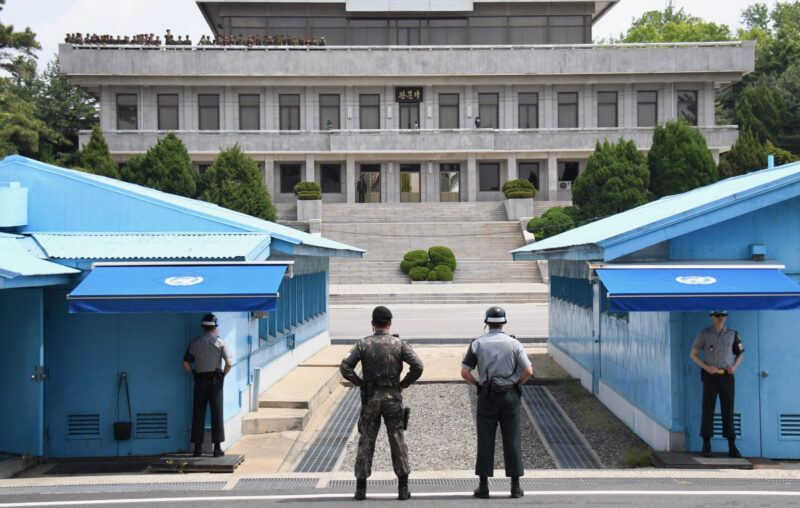 President Joe Biden visited Northeast Asia last month. As if possible involvement in a European nuclear conflagration wasn’t enough, he threatened China with war over Taiwan, and pledged to defend the Republic of Korea from its northern antagonist. Now he is off to the Middle East, apparently ready to make security promises to the Medieval Gulf dictatorships of Saudi Arabia and the United Arab Emirates.

One is left wondering how many wars the President wants to wage at once!

Fighting a conventional conflict is bad enough. But for what should this or any President be willing to risk the American homeland?

So far this year the Democratic People’s Republic of Korea has conducted 31 missile tests. More ominously, the DPRK appears to be readying its nuclear test site. As relations improved with the US, highlighted by the 2018 summit between the North’s Kim Jong-un and President Donald Trump, the North imposed a moratorium on nuclear and long-range missile (ICBM) tests. The bilateral relationship has since cratered. Kim launched ICBMs earlier this year, and a nuclear test appears inevitable.

The convergence of missile and nuclear tests is directed at creating a nuclear deterrent against America. If Pyongyang gains the potential—a serious possibility would be enough—of dropping nukes on even a couple US cities, the military picture will look very different for Washington. And North Korea is seeking to become a major nuclear power.

Last year the Rand Corporation and Asan Institute issued a forbidding assessment of the DPRK’s program. They warned “that, by 2027, North Korea could have 200 nuclear weapons and several dozen intercontinental ballistic missiles (ICBMs) and hundreds of theater missiles for delivering the nuclear weapons. The ROK and the United States are not prepared, and do not plan to be prepared, to deal with the coercive and warfighting leverage that these weapons would give North Korea.”

Imagine such a world. Pyongyang would be firmly ensconced in the second tier of nuclear powers, alongside France, India, Pakistan, and the United Kingdom. The North could overwhelm missile defenses in Asia and America. In the event of war North Korea could target not only US possessions in the Asia-Pacific, but also cities across North America.

Of course, Kim still could not attempt a first strike since the US possesses an overwhelming deterrent. And nothing suggests that Kim is suicidal, prepared to leave this world atop a radioactive funeral pyre in Pyongyang. However, if he believed his regime to be endangered, he could threaten to “unleash hell” and, unfortunately, deliver on that promise. And the result would be disaster for the United States.

Yet the administration is living in the past. President Joe Biden’s world is one in which the US defends everyone from everything. It is a continuation of the Cold War in which America’s oldest President grew up and entered politics. He can’t imagine anything changing, even though the Soviet Union is gone, Maoist madness has disappeared from China, and Washington’s allies and friends have recovered from World War II, which was nearly 80 years ago.

Hence, last month, after returning from the Korean summit, Daniel J Kritenbrink, Assistant Secretary of State for East Asian and Pacific Affairs, firmly enunciated the status quo. Acting as if nothing had changed since the Korean War ended in 1953, he declared: “The US commitment to the defense of the Republic of Korea and to strengthen our combined defense posture consistent with the US-ROK mutual defense treaty is ironclad, including the US extended deterrence consistent to the ROK using the full range of US defense capabilities.”

Particularly important is Kritenbrink’s endorsement of extended deterrence, which means the willingness to fight a nuclear war for another nation. Washington made that promise for Europe in the 1950s, since the Soviet Union had superior conventional capabilities. America’s readiness to use nukes was believable since the US had intervened twice in Europe and could not easily concede the continent to a hegemonic rival. The same threat was credible on the Korean peninsula since the North did not possess nuclear weapons. Neither the USSR nor China would risk nuclear war over the peninsula, making extended deterrence essentially a freebie.

Pyongyang is very likely to have a full-fledged nuclear deterrent in the near future. Sooner than that, Kim will have a plausible deterrent, that is the possibility of hitting America with nuclear weapons. This will force future Presidents to decide how great a risk they are willing to run on behalf of the South.

Imagine a violent incident between Seoul and Pyongyang that escalates to war. As US forces begin to flow into the peninsula Kim sends a message to America’s President, warning that any drive north that threatens the communist regime would be met with nuclear strikes from the regime’s abundant arsenal. The threat seems plausible. Though Kim is not suicidal, he cannot count on rescue by China, as in 1950. Be that as it may, would any American President be so irresponsible as to risk bringing a nuclear holocaust upon his own nation?

South Koreans are not unaware of this possibility. The reluctance of Washington to directly confront Russia over Ukraine at least partially reflects fear of prompting escalation to nuclear weapons. Moscow has a much greater stake in the conflict and, as the inferior conventional power, relies on nukes to help maintain a military balance. It would be foolish and irresponsible for the administration to risk a clash that could spiral out of control.

Indeed, polls indicate that the American people are reluctant to go nuclear on behalf of other nations. Emily Sullivan of the Chicago Council on Global Affairs noted that while Americans were willing to use nuclear weapons if the US was attacked, writing, “In a March 25–28 Council poll, respondents were asked whether they would support the use of nuclear weapons in various situations. As part of the question, they were informed that the United States has promised to defend allies with nuclear weapons as part of its commitment to NATO. Even with this reminder, only 44 percent say they would support the use of nuclear weapons by the United States if a NATO ally is the victim of a nuclear attack, and support is even lower (31 percent) if the initial attack on the ally is chemical or biological in nature.”

The same rationale applies with even greater force to the ROK. South Korea is a valuable friend, with connections to America that go far beyond a military alliance. However, Washington’s chief responsibility is to protect and preserve the US—its people, territory, liberties, and prosperity. Nothing involving South Korea warrants Americans risking nuclear attack. Indeed, Washington’s ties with Europe are deeper than with the ROK; fewer Americans almost certainly would support using nuclear weapons on the latter’s behalf.

In any case, the South does not need America’s help. The ROK enjoys a massive edge over the North—more than 50-to-one in economic strength, two-to-one in population, and extraordinary advantages in technological prowess and international connections. Seoul also already devotes much greater effort to the military than do Japan or the Europeans (some of whom merely maintain essentially pretend militaries).

And there already is abundant South Korean support for creating a nuclear arsenal. Decades ago President Park Chung-hee began a nuclear program, which he abandoned only under pressure from the Nixon administration. The North’s nuclear efforts have stoked ROK support for development of a countervailing deterrent. Detailed a Chicago Council report earlier this year:

Once a topic for the political fringe, acquisition of nuclear weapons has become a mainstream feature of South Korea’s national security discourse. Public opinion polling over the last decade shows consistent majority support for nuclear possession. Leading political figures publicly discuss the idea of either developing a South Korean domestic nuclear weapons program or seeking the reintroduction of US tactical nuclear weapons to the Korean Peninsula. In recent national elections, the conservative party included the return of US nuclear weapons in its policy platform. However, public attitudes around the distinctions between an independent nuclear arsenal and US deployment, as well as the potential implications of pursuing either option, are not well explored. Even though the nuclear issue is not prominent in campaigns ahead of South Korea’s March 2022 presidential election, the growing threats in the region and doubts about the security alliance with the United States make the nuclear question increasingly relevant.

Although allied proliferation might not be the best solution, in dealing with North Korea there are only second-best responses. Today Washington greets every new North Korean missile test with a whiny complaint, which makes America look weak. Since Pyongyang is willing to force its citizens to endure any hardship, additional sanctions would be ineffective; moreover, China and Russia can be counted on to veto any new UN penalties.

Absent a miraculous deus ex machina, the North will soon be able to destroy American cities. This requires Washington to consider the unthinkable: acquiescing to if not encouraging South Korean development of its own nuclear deterrent. All other options look not just worse, but potentially disastrous.

This article, US Celebrates Alliance With Seoul: But Is South Korea Worth a Nuclear War?, was originally published by the American Institute for Economic Research and appears here with permission. Please support their efforts.