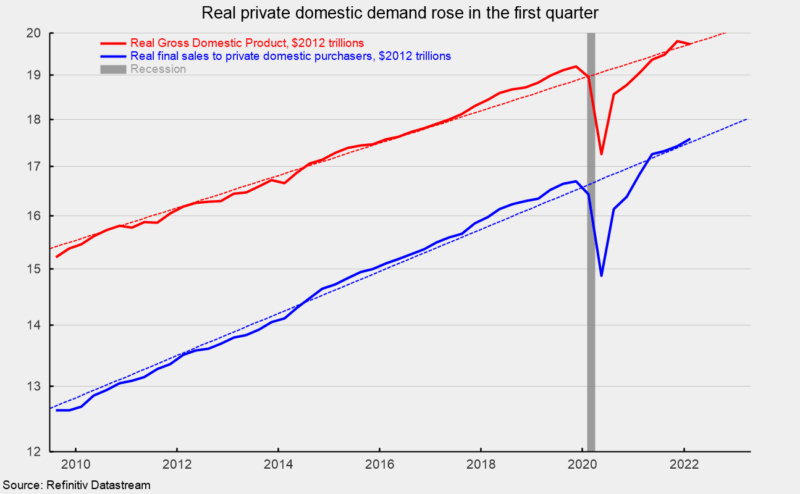 Businesses added to inventory at a $158.7 billion annual rate (in real terms) in the first quarter versus accumulation at a $193.2 billion rate in the first quarter. The slower accumulation reduced first-quarter growth by 0.84 percentage points (see fourth chart). The inventory accumulation helped boost the real nonfarm inventory to real final sales of goods and structures ratio to 4.00 from 3.87 in the fourth quarter; the ratio hit a low of 3.75 in the second quarter.  This is still below the 4.3 average for the 16 years through 2019 (see fourth chart).

Government spending fell at a 2.7 percent annualized rate in the first quarter compared to a 2.6 percent pace of decline in the fourth quarter, subtracting 0.48 percentage points from growth.

Lingering materials shortages, labor constraints, and logistical problems are sustaining upward pressure on prices. Upward price pressures have resulted in a new cycle of Fed policy tightening, raising the risk of a policy mistake. Furthermore, geopolitical turmoil surrounding the Russian invasion of Ukraine has had a dramatic impact on capital and commodity markets, launching a new wave of potential disruptions to businesses.

The outlook is for continued economic growth, but risks remain elevated. Additionally, 2022 is a Congressional election year. Intensely bitter partisanship and a deeply divided populace could lead to turmoil as confidence in election results are coming under constant attack. Contested results around the country could lead to additional economic disruptions and government paralysis, again testing the durability of democracy and the union itself. Caution is warranted.

This article, Weak Headline Masks Underlying Resilience in First Quarter GDP, was originally published by the American Institute for Economic Research and appears here with permission. Please support their efforts.