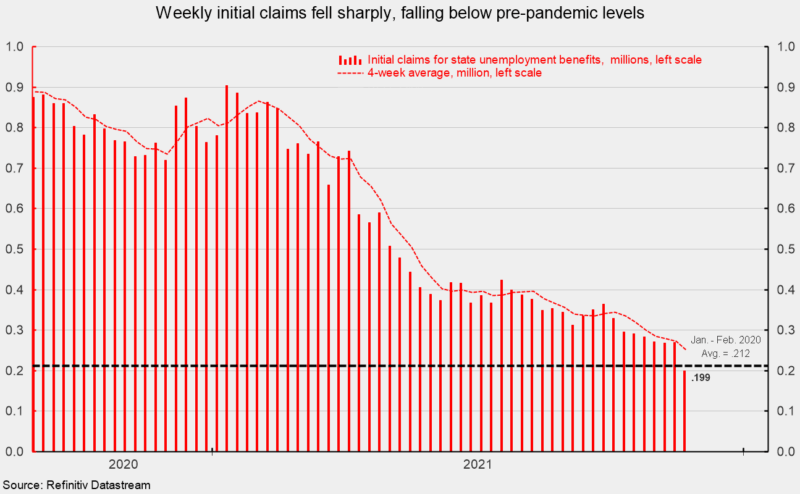 Initial claims for regular state unemployment insurance fell to 199,000 for the week ending November 20, a drop of 71,000 from the previous week’s tally of 270,000 (see first chart). The latest data is the lowest level since November 15, 1969, and the first drop below the pre-pandemic level of 212,000 for January and February 2020 (see first chart). It is possible that seasonal adjustment difficulties were partially responsible for the unusually sharp decline.

The four-week average fell for a seventh consecutive week, coming in at 252,250, also the lowest level of the recovery. The results suggest the labor market remains extremely tight, but additional data is needed to confirm the extraordinarily low result.

The number of ongoing claims for state unemployment programs totaled 1.778 million for the week ending November 6, a drop of 168,253 from the prior week. The decrease resumes the downward trend in place from mid-September through mid-October before an increase for the week of October 30. Before the pandemic, state continuing claims were just over 2 million (see second chart).

Continuing claims in all federal programs totaled just 654,233 for the week ending November 6, a decrease of 584,137 (see second chart). The drop was concentrated in the Pandemic Unemployment Assistance and Pandemic Emergency UC programs.

The latest results for the combined Federal and state programs put the total number of people claiming benefits in all unemployment programs, including all emergency programs, at 2.432 million for the week ended November 6, a drop of 752,390 from the prior week (see second chart).

Initial claims fell sharply in the latest week, hitting the lowest level in more than 50 years. However, seasonal adjustment difficulties may have played a role. More data is necessary to confirm the unusually sharp decline. Nevertheless, the labor market remains tight, as labor shortages, along with materials shortages and logistical issues, continue to hamper supply across the economy, pressuring prices. Eventually, supply will rise to meet demand but in the interim, price pressures are likely to remain elevated.

This article, Weekly Initial Claims for Unemployment Benefits Drop to the Lowest Level Since 1969, was originally published by the American Institute for Economic Research and appears here with permission. Please support their efforts.